Welcome to another Words for Thought! Herein, you will find five stories dealing with love—the ways it changes over time, the ways it persists, and the ways it can evolve into something new. These are stories that mix hope and melancholy, stories about endings and beginnings, life, death, and what comes after. Happy reading!

“The Long Way Up” by Alix E. Harrow, published in The Deadlands , is a re-telling of the myth of Orpheus and Eurydice. The traditional roles of husband and wife are reversed as Ocean is left behind to mourn her husband Ethan, unable to let go and move on.

Ocean’s twelfth therapist isn’t fully licensed in the state of Maine. Her office is an RV parked behind the Hannaford, from which she also sells crystals, blueberry jam, and sex. Her advice is erratic and mystic, largely unhelpful, but Ocean doesn’t mind. She doesn’t want to be helped.

As Ocean decides to seek Ethan in the land of the dead, Harrow offers readers an alternate way to understand Orpheus’s supposed act of love and bravery in risking everything for Eurydice, as well as him losing her again when his faith wavers. Like Orpheus, Ocean never doubts for a moment that Ethan will be grateful that she sought him out to rescue him and return him to the land of the living. Instead of an act of love, it’s an act of hubris. Ocean is not the kind of person that fails at marriage. She carries an idealized picture of her husband in her mind, and an idealized picture of what their life together was, and what it will be again.

But the longer Ocean spends in the land of the dead, the more her perspective shifts. What Orpheus lacks in the original myth is an understanding of Eurydice as his partner, someone he can trust. She is a passive object to be rescued, and so he has to look back to make sure she’s following him. Harrow does a wonderful job of showing Ocean and Ethan’s relationship growing, putting work into their relationship until it is a true partnership. In the land of the dead, Ocean learns to truly see Ethan, and truly see herself as well. Her love is tested, and she almost loses faith in it, but together, she and Ethan are ultimately able to evolve their love into something stronger.

“Before We Drown” by Vanessa Fogg in The Future Fire pairs nicely with Harrow’s story in that it also portrays a more mature and considered form of love. Love doesn’t have to be about big, dramatic, romantic gestures (like retrieving your lover from the dead). It can be about the quieter moments, about just being together, growing together, and learning who the person you love is over time.

But first, my love: listen to me. Do you remember that moment between storms? Between the plagues and floods and flame? That moment when we were free?

It was just a weekend getaway. One among the many we’ve shared. Not our honeymoon, not our wedding day, not the first time we said, “I love you,” or even our first trip together. But there are small moments that flash like lightning. That glow against the backdrop of time, shining when all else fades.

Fogg packs a lot into this flash-length piece, as one partner tries to get the other to remember a small moment, believing it will allow them both to step out of time to escape the environmental apocalypse about to drown the world and into their shared past. Like Harrow, Fogg presents a more considered, introspective moment where two people are asked to reflect on their relationship and choose what about it matters most to them. It’s melancholy, but also hopeful, even as it leaves the apocalypse and the story’s ultimate outcome largely in the background, shifting the focus away from the “big moments” in both the relationship and the story itself to underline the fact that a small moment can mean everything.

“The Brief Life Story of Lila” by Danny Cherry Jr. from Fiyah Issue 21 is an absolutely wrenching and heartbreaking story, but one that’s also filled with love and hope. Cherry makes effective use of form and the second person POV, framing the story as a letter written to the titular Lila.

You were six the first time you had a vision of someone’s death – your parents. The vision came when y’all were walking to the park and you were between them, holding hands and heading towards the monkey bars. The vision was blurry and foggy like peering through smudged glass; a brief flash of light, a blaring horn, rain hitting the pavement like a low round of applause; metal grinding on metal, and raspy gurgling breaths, like nickels scraping in a blender or someone struggling to clear something from their throat. Somehow, you knew even the day their deaths would happen.

Lila’s ability to see death with a touch makes her nihilistic. She gives up on life and tries not to form attachments, feeling that to love is to know loss, until she meets Paul. They fall in love, despite her best efforts. They lose a child, drift apart, and ultimately find each other again late in life. Similar to Harrow and Fogg’s stories, Cherry explores not the first blush of love, but the way love evolves over time. Sometimes it’s messy and painful, and it can be terrifying in the way it takes away control. Ultimately, it’s a story about the persistence of both hope and love as Lila grows to accept loss and appreciate the fact that fear and grief, as hard as they are, mean that her love was worthwhile—she finally allowed herself to care about something enough that it hurt to let it go.

“Girl Oil” by Grace P. Fong, published by Tor.com , is as much about the main character learning to love and accept herself as it is her relationships with others, which are marred with jealousy and longing. Chelle is in love with her best friend, but it’s unrequited. He’s interested in her roommate, and Chelle can’t help but feel it’s because Wenqian is skinnier, lighter-skinned, fitting a standard of beauty that she does not.

Wenqian exits with a pleasant laugh, floral dress dancing between her legs. Her gold bracelets jingle when she waves thank-you in words I only half understand. I hunch down to hide my plain button-up, but I still spill from my too-skinny jeans.

Wenqian credits a product called NuYou, which makes people “lighter and brighter”. Chelle tries it, and finds it works, but perhaps a little too well. The story is painful in its depiction of the pressure to fit certain standards of beauty, the racism Chelle faces for being too dark-skinned while also not being Chinese enough, or not being the “right” kind of Chinese. Wenqian and Chelle compete over movie roles, underlining the idea of women not taking up space, there being room for only one woman, especially women of color, and that they must fight each other and fit themselves into someone else’s mold in order to be good enough.

There are shades of “The Little Mermaid” in the story’s ending. Chelle makes herself invisible through overuse of NuYou and ultimately dissolves herself into the ocean. Rather than a tragic ending though, Fong presents this as a radical act of self-love. Chelle finally allows herself to become vast, to spread throughout the ocean and take up as much room as she wants, not apologizing to anyone or ever allowing them to make her small again. It’s bittersweet, but the perfect ending as Chelle grows her understanding of love in a way that allows her to love herself and let go of her pain.

“I Know You’re There” by Paul Tremblay in Air/Light Magazine is both a love story and a ghost story. After his husband David’s death, Silas struggles with guilt and grief to the point where he creates his own haunting. He tells the story of David’s death to various people, trying to unburden himself, changing subtle details each time, but also leaving out one key element—his conviction that David stood up and waited for Silas to acknowledge him, but Silas was too cowardly to turn around and so waited until David lay back down and accepted his own death before looking at him again.

And right before I hung up, most of me looking at the red phone symbol, the one you press to hang up, and in my eye corner, I saw movement. I couldn’t tell exactly what it was that was moving, but David or something near David moved. That’s what I saw in the eye corner. I hung up and turned my head. Nothing was moving. I waited and watched but nothing. Then I went back to David and his right arm wasn’t behind his back anymore. His right hand was next to his face.

Instead, in the narratives Silas creates, he sees David move, but is unable to do anything about it. He absolves himself of his guilt, publicly acknowledging that David’s death is not his fault, while privately blaming himself. It’s a quietly eerie story that asks whether the persistence of love and guilt both might be enough to manifest a ghost. At the same time, it also explores the idea of wanting to be haunted, while fearing being haunted. If Silas is truly being haunted by David, it might mean that he is worthy, that he’s loved enough for David to want to stick around. On the flip-side, it might mean that his feelings of guilt and self-blame are justified, that he really didn’t do enough to save David. In addition to questioning the idea of hauntings, the complicated nature of love, and the desire to hold on, “I Know You’re There” also delves into the function of stories themselves and the way humans create narratives in order to understand the world and in some cases define it until fiction and reality are indistinguishable. 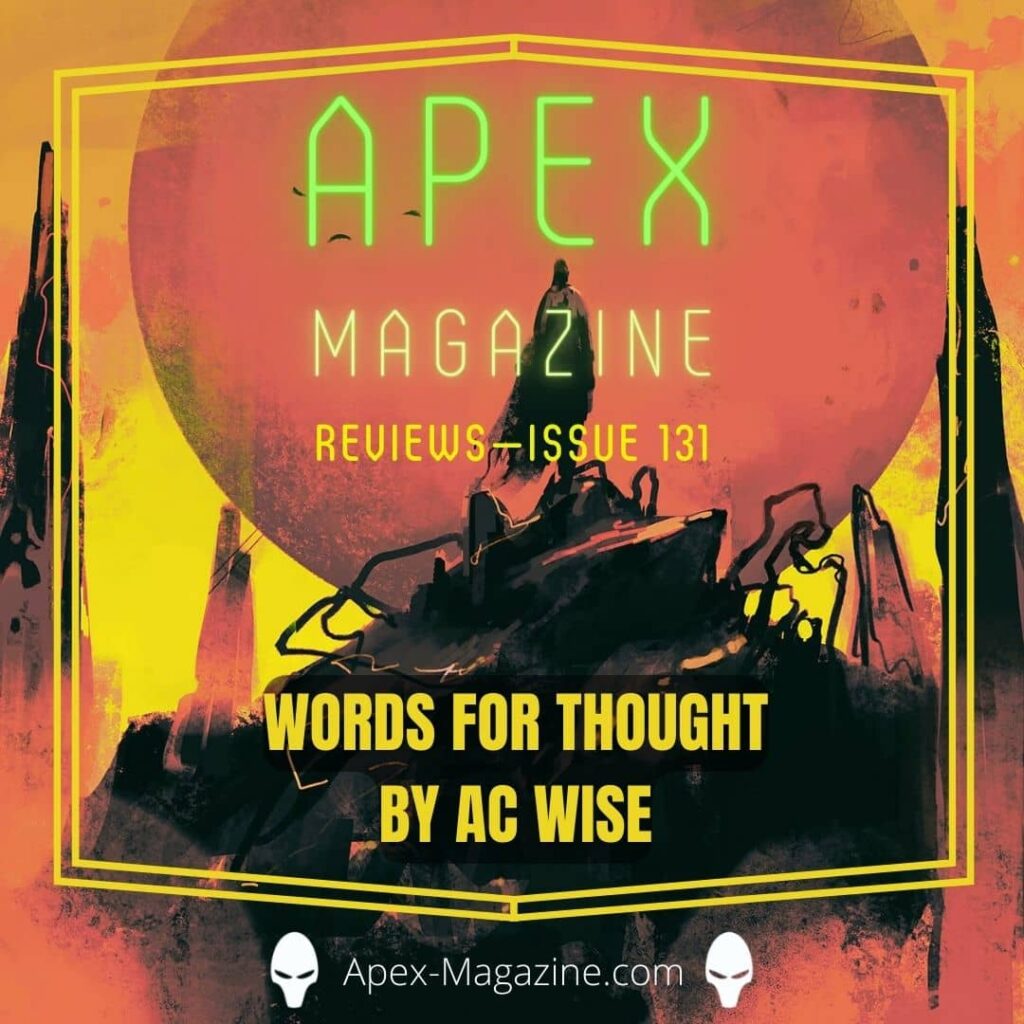