Welcome to another Words for Thought! Summer is upon us, which means it’s the perfect time to catch up on short fiction. (As are Fall, Winter, and Spring, but I digress.) This month’s column will focus on the idea of truth. How do we define it? Who gets to tell it? Can we even agree anymore that it exists or that it matters? These five stories grapple with truth in a variety of ways, sometimes directly and sometimes obliquely. Enjoy!

“The Bones Beneath” by Vanessa Fogg published by PodCastle  deals with the suppression of truth by government forces. Fay lives in a world where there is an officially approved history, books are regularly banned, and neighbors are encouraged to report on each other. Her friend, Tess, used to tell stories about powerful magicians who could manipulate bones—the kind of story appearing in books that are now considered dangerous. Tess and her mother were killed in a purge, and Fay is left to cope with her grief and her guilt while trying to find a meaningful way to honor her friend.

Four years ago, the bones began pushing up from the earth. Fay is now seventeen, and she feels the bones’ movements more strongly each year. It’s the end of winter, but not yet the beginning of spring. Snowmelt has turned the fields to mud, and the grass is dead and brown. The trees still bare, the air still chill. Mist in the morning, or her own breath white as frost.

The story is beautifully written, and Fogg does a wonderful job of portraying Fay and Tess’s friendship and suffusing the story with an atmosphere of suspicion, distrust, and fear. The characters have complicated relationships and are forced to make heartbreaking choices; on the night of the purge, Tess’s mother comes to Fay’s family for help, and her parents turn them away. The choice is heartbreaking, but also understandable as Fay’s parents are put in the impossible situation of wanting to help a neighbor, but not wanting to risk their own family. The idea of surfacing the truth is made very literal here, as bones push up from underground, providing hope that some truths are too big to stay buried, especially as long as there are people willing to push back against and ask questions.

“The Projectionists” by E.M. Linden published in The Deadlands pairs nicely with Fogg’s story. Hasan, like Fay, lives in a city where truth is suppressed and deaths are covered up to the degree that the dead cannot even be mourned, because to do so would admit said deaths happened in the first place.

Not everyone leaves footprints. There are the silent people. Hasan has seen them ever since he can remember, one or two in a week, perhaps, but there are more and more these days. They’re everywhere. Behind broken windows and waiting for buses on routes that are no longer serviced. Mostly they just seem bewildered. They make no tracks for Hasan to follow.

Denying these deaths doesn’t change the fact of them or stop ghosts from appearing. Soon, Hasan isn’t the only one who can see the ghosts and they grow stronger, refusing to be ignored, projecting their memories back into the world of the living, until everyone—the government included—is forced to acknowledge them.

Like Fogg’s story, the writing and imagery in Linden’s story are lovely, and both stories mix heartbreak with hope. Particularly effective is Hasan’s relationship with his father. Linden does a wonderful job of showing Hasan’s father’s quiet grief, making it clear he is a man mourning the death of his wife, but unable to speak about it, even to his son. The rift between them is palpable and painful. Hasan’s father  wants to comfort his son, he wants to admit the truth, but he’s afraid doing so will put Hasan in danger. Like Fay’s parents, Hasan’s father is forced to choose between the truth and protecting his son, and ultimately comes down on the side of perpetuating a lie, believing he is doing what’s best to keep his family safe.

“Baba Nowruz Gives His Wife a Flower Only Once a Year” by Fatima Taqvi in Fantasy Magazine asks us to think about the idea that there’s a right and wrong way to tell a myth, legend, or a fairy tale and that some versions are truer than others. I imagine this concept might resonate with parents who have heard from their children that they’re “not telling it right” when it comes to bedtime stories.

But my mother isn’t bound by what has gone before. And once she has decided this, there are no rules she cannot break.

The protagonist’s mother tells stories that branch away from traditional tales, where not everything ends in tragedy. Even though the girl is mocked for retelling the “wrong” version of stories, she continues the tradition after her mother’s death, spreading her mother’s version of the tales to others. Eventually, she encounters two mythical figures from one of her mother’s stories—Baba Nowruz and his wife Nane Sarma. He visits her only once a year, just as the stories say, and they can never be together for more than one night. When the protagonist confronts Baba Norwuz, he warns her that there would be dire consequences to changing the way things have always been done, which, of course, she doesn’t accept.

This is a story about the power of stories themselves, and how they can create new truths or reinforce old ones, shaping reality through the way they’re told. Taqvi does an excellent job of upending the idea that happy stories are less serious or valuable than grim stories that show “hard truths.” “Truth” in stories is malleable; why shouldn’t we choose a better ending if we can?

The story also takes on the character trope of the (usually male) gruff loner who takes the hard road and shoulders his burden alone because he is tougher than others and can handle the pain required to keep the world on course. Taqvi shows that sometimes true strength and courage is being the first to step away from an established path, and the idea of choosing to carry on alone “for the greater good” is sometimes just an excuse for avoiding the hard work needed to maintain a relationship.

“Riding Hood” by Tariro Ndoro in Omenana Magazine is another story about literally unearthing the truth. A series of brutal murders are committed against abusive men whose own crimes no one seemed interested in stopping. Rumors abound regarding the vigilante killer—men tending to view the crimes one way, while women tell different stories amongst themselves.

They say it was a serial killer. The manner of death, the MO as one officer rambled, was similar in all cases: blunt force trauma to the cranium, the murder weapon being an axe, bruises, and contusions consistent with grievous bodily harm before the final blow. DNA under the fingernails of the victims showed signs of struggle. Hard struggle.

The story’s structure mirrors the idea of investigation, uncovering new facts and elements a bit at a time, building up to a full picture. The reveal is satisfying, hinted at in a way that gives readers a glimpse of the truth, but given deeper meaning as more details are shared and as the characters gain new understandings of the situation. The supernatural elements add richness, as does the commentary on traditional gender roles, who holds power and who doesn’t, and the societal assumptions made about the types of people who commit violence and who deserve justice in this world—or the next.

Last, but not least, “To Live and Die in Dixieland” by Russell Nichols, published right here in Apex Magazine is a painful and brutal story about owning the truth and not shying away from it, especially when the truth is ugly. Brothers Walter and Royce run a VR experience that allows white people to experience slavery as a watered-down tourist attraction. From the get-go, the project is fraught. Technical glitches occur as Walter demonstrates the system for journalists, and the project’s purpose and who it serves is a pressing question as well.

Kamara waves her hands. “You’ve said you created this reverse slavery simulator for people like them to ‘experience the unspeakable horrors of America’s racist history.’” The group fidgets. Kamara goes to a young white girl, fresh out of journalism school. Blood spreading across her face like a bedsheet. “But if, say, this young lady here, say she has these big ideas for anti-racist policies, but she becomes a user and goes to Dixieland on a daily basis. Don’t you think she might feel … exonerated?”

The situation devolves further when Walter learns that one of the beta testers had a young son who snuck into the VR experience and committed suicide as a result of the horrors he witnessed. Walter learns that his brother temporarily turned off the filters, allowing the experience to show the full horrors of slavery including rape and torture, and that was the version that the boy experienced. While Royce didn’t intend to hurt anyone, he argues that Black children weren’t protected from the truth of slavery, why should white children, or white adults for that matter, only have to see a fraction of the truth?

Nichols does an incredible job with a painful subject. Both brothers and their points of view are fully developed and realized. At its heart, the story is a conversation between the two brothers, leading to a change in Walter’s worldview. Their relationship is further complicated by the way their father treated them, and the fact that Walter is lighter-skinned. Royce carries a lifetime of guilt for not protecting Walter from their father’s abuse, but he can’t stand by and let his brother present a watered-down truth either. The story is brilliantly done, layered, and nuanced, and again, like other stories here, deals with the concept of truths too big to look away from or deny. 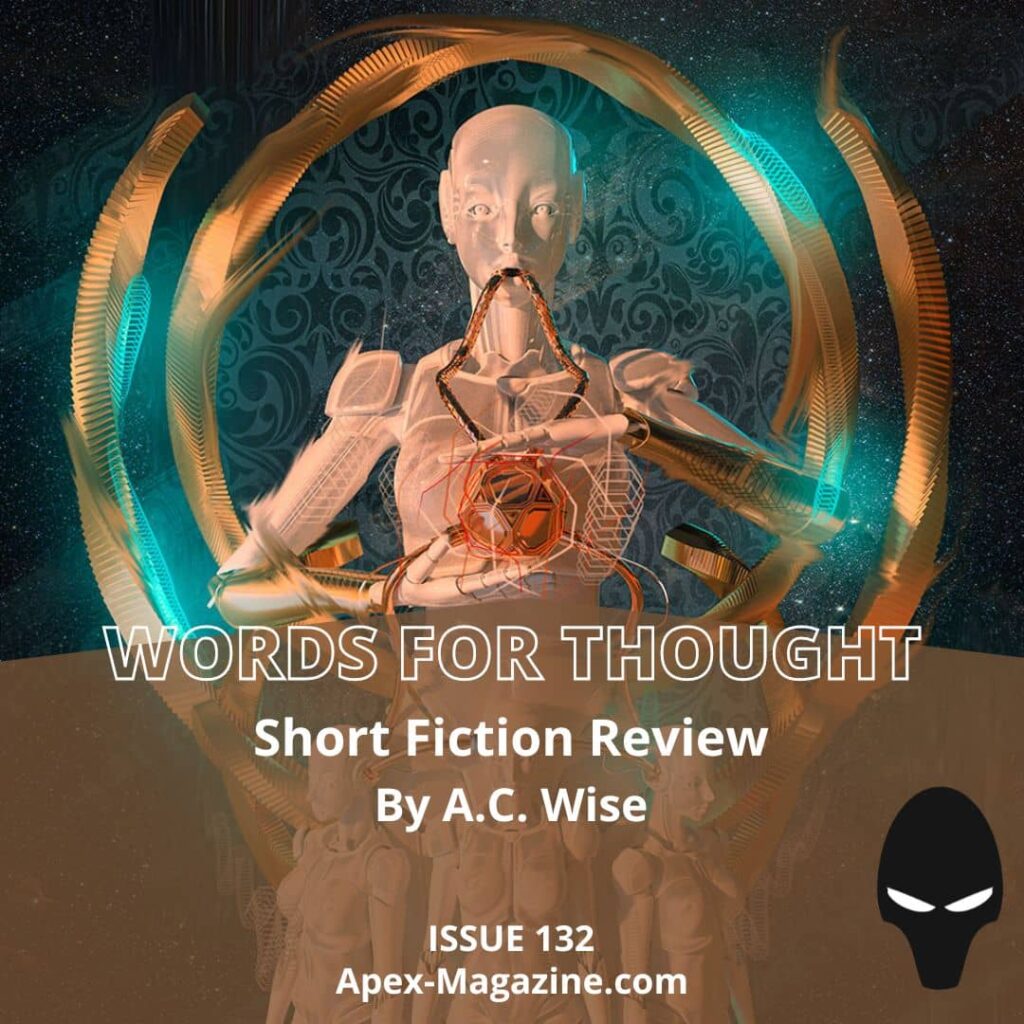