Welcome to another Words for Thought! This month’s column will discuss three recent stories and two slightly older stories, all by Indigenous authors, and all dealing in some way with the theme of perspective and perception. How do we see ourselves, how do others see us, and what happens when we try to see ourselves or the world from someone else’s point of view? Happy reading!

Mouth & Marsh, Silver & Song by Sloane Leong, published in Fireside Magazine, centers on a prophet perceived by humans as a monster, though one who serves a purpose. A cut with a silver blade opens mouths in her flesh that sing prophecies to make princes into kings. One day, a princess comes to her asking to be made queen rather than demanding or simply taking what she feels she is owed. The princess’s brother also wants the throne and is prepared with knights clad in silver and has no intention of taking no for an answer.

It took only a single night for me to grow to my mother’s stature, roped in muscle, a crown of hair as thick as a bramble. From sunrise to sunset, I dined on spearwort and frogs, milkweed and crane. Moth wings and cattails fell from my voracious lips like raindrops. Now the river was motionless, still as birth as it observed my growth like a profane weed. I settled into an engorged stupor in the chilled, wet meadow, content with only the moon as my witness.

The story is beautifully written, giving even its moments of violence and its descriptions of rot a poetic twist. The choice of language reflects one of the story’s central themes—the rejection of the idea that something needs to be beautiful, or at least palatable, to be worthy of respect and worship. The prophet reflects that if her nature were otherwise, supplicants would come to her with offerings and ask her for boons. But because she is a creature made of leeches who wallows in mud, men will never perceive her as anything but a monster and feel justified in taking what they want from her through violence. Leong shows the beauty in things often considered disgusting or beneath notice, like ticks and worms, and shows the power in them as well. The story also rejects the notion of kindness and bargaining as weak in comparison to the power implied in the ability to simply conquer. It isn’t an either-or proposition; it doesn’t require ruthlessness or the willingness to sacrifice others in order to rule. 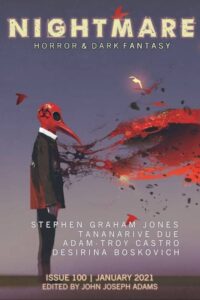 How to Break Into a Hotel Room by Stephen Graham Jones appears in Nightmare Magazine. Javi always has a scheme going and has ever since he was a kid. Now his longtime partner in crime, Tran, is dying and Javi wants to steal something for him to take his mind off death.

But you can hold a thing like that off with the right stolen watch, the right pair of cufflinks—cufflinks will be best, really, because what kind of shirt do you even need to wear them with, right? Stealing them will be stealing the most extra, useless thing, will prove that it’s about the act itself, not what you get. The scam is what’s holy, never mind what you get with it. What’s important is getting away with it.

Javi hatches the perfect plan to break into a series of hotel rooms, painting a picture for himself of him and Tran as cool kids almost akin to folk heroes while refusing to look at the darker side of their actions. But his plot also dredges up memories he’s tried to bury of the time a scheme went wrong and resulted in the murder of a high school classmate’s family and that guilt returns to haunt him in a very literal way.

The past returning to haunt the present is a horror trope used to great effect in this story. It’s clear from the start that the way Javi wants to perceive himself doesn’t match reality. He tells himself he’s helping his friend, but he knows he’s making excuses and what he’s doing is wrong. He’s never fully escaped the cycle of scamming and stealing; the past is still very much present for him and so it’s no surprise that rather than blundering into a stereotypical haunted hotel filled with someone else’s tragic past, the ghosts he encounters are the intensely personal ones he carried there himself. Jones effectively builds a sense of dread and manages to strike the perfect balance in Javi as a character who is far from innocent, but who is sufficiently relatable that the situation he finds himself in remains horrifying rather than one where the reader feels vindication watching a bad guy get what he deserves. 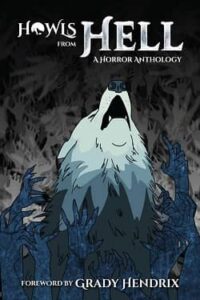 She’s Taken Away by Shane Hawk published in the anthology Howls from Hell plays with the good twin/evil twin trope and looks at the question of nature versus nurture. The story is presented in the form of a police transcript as Dr. Jay M. Landry interviews Annie Ellis about her twin sister and the terrible crimes she’s accused of committing.

Yes, she has acted like different people, not herself. Sometimes she would take on an unfamiliar accent or hold wildly different opinions on things. It was strange. It was only me who saw it, though. When we were at school or in front of our parents, she always acted normal. She only ever revealed that side of her to me. No one else.

The story has a strong voice and manages to do a lot in a relatively short space of time, dropping hints and playing with wording choices as it builds up to its finale. The question of nature versus nurture plays out not only the idea of one twin capable of committing horrific acts while the other is utterly innocent despite the same upbringing but through the doctor’s search for an explanation. He suggests both demonic possession and mental illness as the root cause, refusing the idea that some people might simply be bad and relish that badness. In its exploration of the good twin/evil twin trope, the story also takes a look at the absurdity of that same trope on a meta-level, showing how the desire to label things in a binary fashion and forming strict preconceptions about people can be a dangerous thing.

Te Ika by J.C. Hart originally appeared in Cthulhu: Land of the Long White Cloud and was reprinted in Year’s Best Aotearoa New Zealand Science Fiction & Fantasy in 2019. The story blends hints of cosmic horror with mythology while also being a touching story about two sisters trying to find common ground. Grace, an experienced cave diver and rock climber, convinces Izzy who is far more anxious and cautious to come with her on an exploration trip. She’s convinced Izzy will have a wonderful time if she can just let go of her fear, but partway through the climb, an earthquake hits and Izzy falls. Deep underground, she encounters a being who claims to have been imprisoned by Māui and strikes a deal, making it a condition of the bargain that along with Izzy getting out of the cave, Grace will also be safe and protected.

It was stars and dark skies. It was some creature I couldn’t understand, sprawling across the wallpaper, trailing dust and debris behind it, leaving fire in its wake. It was dark and vibrant and vivid and more than alive. I fell to my knees, all the strength leaving me at the sight of this great beast. What was this? What was going through Izzy’s mind?

The story is told in two halves, from each sister’s perspective, and this is where the story’s true strength lies. Izzy and Grace each push themselves out of their comfort zone and each put their trust entirely into the other’s hands, ignoring their own sense that something is wrong. This is both lovely and heartbreaking as each tries to see the situation from the other’s point of view, trying to do what they believe will make the other happy at the expense of their own comfort. Hart perfectly captures how complicated family relationships can be and how even love and trust can lead to unintentional harm. What makes this extra painful is that each sister’s heart is in the right place and both genuinely want to take care of each other, but they are caught up in circumstances utterly beyond their control.

Transitions by Gwen Benaway was published in Love Beyond Body, Space & Time in 2016. As the main character is transitioning, she signs up for an experimental drug trial promising fewer health risks and negative side effects. Shortly after taking her first dose, she attends an Elder’s Teaching at her workplace during which she hears singing no one else can hear. The next day she sees a woman in a traditional jingle dress who she, at first, takes for a performance artist until a man in a business suit walks straight through her. She wants to believe these are hallucinations caused by the drugs until she learns she’s part of the control group who received the placebo and must come to terms with the fact that something that cannot be scientifically explained is happening.

The elder sighed on the line. “Girlie, you aren’t listening to me. You must be Bear clan, so stubborn. Being a woman isn’t about your body. It’s about your spirit. You need ceremony to help with that, not pills.” She sighed a second time, this time a little tired. “Look, your ancestors are going to find you, one way or another. Call me when you are ready to talk to them again.”

Like Hart’s story, Benaway’s is also about a clash of perspectives, however, where Izzy and Grace try to see the world through each other’s eyes even when it’s to their own detriment, here the unnamed protagonist is so rooted in her perspective and has been so shaped by her past experiences that she is unable to accept the truth or accept help when it’s offered. Both stories are wonderful examples of characters shaping their narratives and moving the story rather than being moved by it. All throughout her transition thus far, the protagonist of Benaway’s story has had well-meaning people offering their advice. Even though they believe they are being helpful, from the protagonist’s perspective they’re judging her, telling her “the right way to be a woman,” and denying her personal journey. It’s only natural that she bristles at yet more “helpful advice.” One of the transitions of the title, however, is a transition in thinking as she learns to see the help she’s offered in the spirit it’s given, rather than as a judgment on her ability to find her own way.