The Upside of the Cataclysmic Meteorite Event 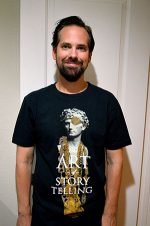 Zebulon Huset hoards his minutes and hours in San Diego where he writes, edits, and teaches creative writing. He recently posted Zebulon’s Guide to Flash Fiction Submissions (2015 year-end version) at his blog Notebooking Daily which lists over a dozen contests and more than 150 publications looking for flash fiction. His writing has appeared in The Southern Review, The North American Review, Dark Matter, The Portland Review, The Cortland Review, Permafrost, The Georgetown Review, Bayou, Harpur Palate, and Westview, among others.

When everyone thought the sky
would go red, it instead          went purple.
Scientists said the red spreads
through the midnight blue to the point
it will be lavender            any day now.
Don’t you see the surreality of your absence?
Squirrels have become the highest paid
animals in Hollywood since Eddie Murphy
finally took up permanence residence
in his lunar space station.
Sulfur looks like mustard,       but its gasses
taste more like asparagus.
One day, they say, we’ll get that glowing
red sky the doomsday prophecies promised,
and the meteorite’s fine shroud of diamond dust
which blocks the sun’s rays will finally top
LA’s smog-sets, and you’ll see the ice spreading
on the 405 and you’ll remember how much
you hated LA               HELL-A
and your dramatic exit and your promise
and wherever you are you’ll stop mid-stride
and feel the irresistible urge to come home
where I’ll have snow mobile suits and flint
and tinder and hot cocoa mix and miniature
marshmallows
ready.