the saddest of angels 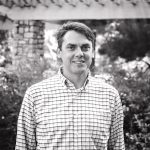 Jeremy Paden is the author of a chapbook of poems, Broken Tulips (Accents Press, 2013). His poems and translations have appeared in Asymptote, Adirondack Review, Beloit Poetry Journal, California Quarterly, Cortland Review, Drunken Boat, Hampden-Sydney Poetry Review, and Rattle, among other journals and anthologies. He is a member of the Affrilachian Poets, an Associate Professor of Spanish and Latin American Literature at Transylvania University, and teaches literary translation in Spalding’s low-residency MFA.

the saddest of angels is a girl who spends her days on black basalt boulders & sings the colors of night: crimson & cobalt, opal & malachite, sings the darkness of stars & the moon & the fullness of glaciers below, a girl who sings with the meadowlark & the southern lapwing, who swims with sea lions in blue arctic currents & dries her body in the southern sun

the saddest of angels sings with the meadowlark & the southern lapwing & was born in a house in a stand of widowed trees from the Mesozoic that still remember the giant lizards of old, a girl whose entrance into wisdom was the whispered stories of survivors, was lessons learned from the give & take of hunger & necessity, was hushed tales told in the dead time of trees waiting for a beautiful death that will never come

the saddest of angels waits for a beautiful death that will never come & is a boy whose song calls forth spring even at the end of autumn, a boy who sings the sad song of bees as they dance out their drunken figure eight, legs heavy with ambrosia collected from secret fields of wild flowers

the saddest of angel sings the drunken song of a unicorn brought all the way from India to Lisbon, not this time for the magic of the horn, but because kings collect unto themselves wonders like bees do pollen, & sings of Clara the rhinoceros who grew to love tobacco & beer & the monoceros that dazzled Durer, the one he cut into wood with armored flanks & a nose horn & a neck horn, the one he never even saw, the one the king of Portugal gave the Pope as one gives a lover a long-stemmed rose at the start of a night filled with longing, the chimera that chained to the hull of the ship drowned off the coast of Villefranche

the saddest of angel sings of unicorns & bees & his words etch dreams into flesh like acid eats images into copper plates, an angel who knows that life is a house built on the back of a seafaring rhinoceros

the saddest of angel is a house built on the back of a seafaring rhinoceros, filled with bees drunk on ambrosia, tended by a girl whose words are rosin distilled from the most ancient of conifers & a boy whose song is the mordant bath that bites the copper plate with the colors of night & autumn, is a house in the sky borne up by the wind of the wings of Angelus Novus

the saddest of angel is a house in the sky, a house whose home is the catastrophe of history, where a girl sits in the sun on boulders doused by the southern ocean, where a boy who had never seen the sea skips for the first time into waves that began as sea lions playing with a girl who sings on wet boulders & sleeps beneath a sky filled with stars whose names he does not yet know

the saddest of angel is a house afloat on the winds that sweep down from Paradise, an angel whose smile without a trace of irony says welcome, whose mischievous eyes say, come, sit beside me, I promise I’ll only think about your impossible request to not upend your life