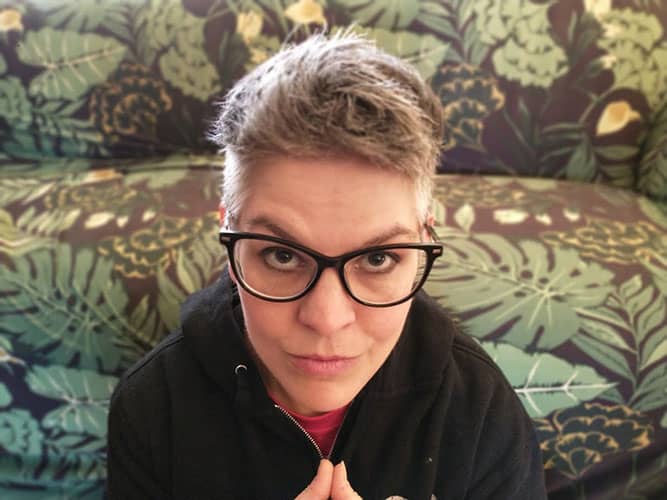 Wendy N. Wagner is the editor of Nightmare Magazine, as well as the author of the forthcoming horror novel The Deer Kings (Summer 2021) and the forthcoming gothic novella The Secret Skin (Fall 2021). Her short stories, poetry, and essays have appeared in more than fifty venues. She also serves as the managing/senior editor of Lightspeed Magazine. She lives in Oregon with her very understanding family, two large cats, and a Muppet disguised as a dog. Find her online at winniewoohoo.com.

A hawk can scissor off the top of a squirrel’s skull as neatly as you or I might snip open an Otter Pop. The bird is surprisingly tidy about the entire process of eating a squirrel, although they feel no qualms about leaving the bits they don’t like behind in your yard—as I learned when I caught my dog nibbling the squirrel’s first finger-joint, its umber-tinted claw nearly as long as my dog’s entire paw. I took it from my dog, horrified she might catch some disease, and flung it into the neighbor’s bushes.

My dog made the saddest of sounds. She is a connoisseur of death and decay, sniffing out horror on every walk through our neighborhood: rancid chicken bones tucked beneath the succulents, mummified rats caught in storm drains, preserved squirrel tail fluff floating along the sidewalks, the bloody back ends of road-killed opossums dripping off curbs. Her prodigious sense of smell ferrets out every last rotting bit of dead animal within reach of her teeth.

When I was a child, I, too, was compelled toward dead things. I didn’t want to see the creatures left flattened beside our driveway or on the adjoining country lane where log trucks and hunters sped, but I couldn’t not see them. It was as if I had grown a kind of third eye whose vision was drawn to the mutilated, the mangled, and destroyed, capturing them in a sharp focus that imprinted each death not merely in my mind, but my heart. I keenly felt the injustice of these small deaths, their frightened, suffering final moments, even if no one else cared to.

I spent three or four years giving every dead creature I found in our yard or along our narrow country road a proper burial. Instead of joining Girl Scouts or 4H, I devoured books about ghosts and the undead. Instead of becoming horse crazed, as so many second- and third-grade girls do, I developed a passion for war, weapons, and Romantic poetry. I eschewed pink for a palette of all-black.

No one seemed concerned by any of this. In fourth grade, my teacher asked us to make a timeline of our lives. It had to be as long as we were tall, elaborately decorated, and rolled like a sacred scroll. At conference time, Mrs. Wexler spread mine out to show my mother, slowly rewinding the years of my short life:

Did Mrs. Wexler point out to my mother that every milestone in my childhood was marked with a headstone? And did my mother say “Oh, ever since Wendy’s best friend died in a tragic accident, she’s been obsessed with death and afraid every cold will put her in a coffin?”

“She always has,” Mom agreed.

I still like cats. And dogs, and all the other little animals. That’s why I’m out in the front yard to discover my dog scavenging for discarded squirrel bits. I distract her with a stick to gather up the remains. Here’s a chunk of vertebrae, the tiny facets lined in white cartilage shining like mother of pearl. Here’s the pelt, heavy and damp as a jacket left out in the rain, the inside polished clean. It’s not gross. It’s almost beautiful. The death of this squirrel seems simple and wholesome—as if it were part of something natural and complete, nothing wasted, nothing uncared for.

I’m not sure I know many humans whose death will be so clean. It is the rare human being whose dead body will be touched with as much care as first the hawk and then, afterward, I have taken handling this squirrel’s. We tend to leave these things to professionals, abandoning our loved ones first to hospitals and undertakers.

It makes dying and death such lonely territory. We Americans are taught to put the dead in their boxes and vanish them from our lives. We reject our sadness and pain—both an attack to the spirit of American optimism—as we reject the corpses of our loved ones, plumping their skins and encasing them in concrete so we can hide from the filthy, stinking truth of decay.

And yet the body remains a part of the world, silent and real, no matter how hard we’ve worked to tidy it away. Every bit of this dead squirrel will be recycled and stirred into the mix of living matter, ready for some other story, some other life. Decay is not repellant or even haunting, but simply the nature of molecules and elements.

As I tuck the squirrel’s pelt in a plastic bag, I see my dog has one more gray trophy in her mouth. I wrestle it away from her and realize it’s the top of the squirrel’s skull, the edges cut with precision, each line as smooth as if it had been trimmed and sanded with power tools.

In shape and size and weight, it is a little smaller than half of a walnut shell. A tiny oval, on the inside pale, on the outside cloaked in the softest silver velvet. The hawk has cleaned it so well a rodent Lord Byron could serve wine from it at his gothic poetry readings.

It is a thing of beauty. I don’t think it’s morbid to say that. I don’t think it was morbid for an eight-year-old to spend their time burying dead garter snakes and raccoons and deer, either. I was simply trapped in silence, worried that someday I, like my dead childhood friend, would no longer be a part of a family, part of a community, but something transformed into the unspeakable. That, I, too would be finally, horribly gone.

Left to nature, our bodies go so very quickly. The thin, fine layer of bone and fur resting on my palm will easily dissolve in the acidic soil of my yard. In a few weeks, a few months at most, it will be gone. My own bony carapace, thicker and harder, will last longer, but it, too, is ephemeral. I am only borrowing the calcium as I spin my story for the people I love, hoping they will not reject me when I die, but speak of me for years and years beyond my mortal span.

My dog barks and I realize I am standing there with a skull in my hand, a Hamlet of suburbia. I toss the tiny thing into the bushes, out of my dog’s reach, but not out of the grasp of other hungry scavengers. They will make good use of it, I hope. Maybe their bodies, like the hawk’s body, will tell the story of that squirrel as they bound through the world.

I myself must go inside and write stories about ghosts.