Sympathy for the Devil: A Duet in Two Solos

Originally appeared in the liner notes for Slightly Above Below Average: A Tribute to Chet Atkins by His Friends, 2011, available at www.chetatkinssolosessions.com. 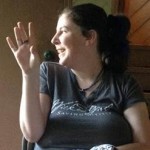 Elizabeth R. McClellan is a poet, editor, lawyer, and occasional loudmouth who lives in the geographic center of the State of Tennessee and thus considers the whole state her backyard. She is a previous Rhysling Award nominee, winner of the Naked Girls Reading Literary Honors Award, and was the 2014 Rhysling Chair. Her work has appeared in the Moment of Change and I Know What I Saw anthologies, as well as Apex Magazine, Calliope Magazine, Goblin Fruit, The Legendary, NewMyths.com, and Stone Telling. For more about Elizabeth follow her on Twitter at @popelizbet or visit www.elizabethrmcclellan.com.

When the Devil’s in Nashville
he stops by Third and Union, late,
after the bars close, where

someone always offers half a beer
at the feet of Chet Atkins. The Devil
tends to leave them for the dudes

who didn’t make it
to the Mission tonight,
but sometimes he clambers up

on the stool the sculptor knew
belonged there, drinks the remains
of a not–quite–cold one,
smokes a discarded butt, plays
what anybody passing by would swear

is a duet, the Ave Maria
audible from up near St. Mary
of the Seven Sorrows, echoing
against the stations of a mother’s grief

until the bell in the tower lets out
a hesitant toll in reply, one
you gotta be listening for to hear.

The few who pass stop, listen, faces
crinkling in joy or grief, shake
like dogs waking up, keep walking,
dazed as a near miss can make you.

It’s hard to have
a private moment
in the public street.

The Damascus Road
wasn’t as well traveled
as the District. This
is a moment of mercy
only bronze can withstand.

I never told anybody this before but
my cousin’s girlfriend’s brother John plays guitar
for a band called Infernatus. (He’s not a Satanist.
Just a metalhead.) He swears one June night

he was walking stone cold sober down Union
at four in the morning, came to and realized
it was nearly dawn. This old man,

he’s sitting on the stool of that sculpture
by the Bank of America building, picking
a righteous tune, some weird echo mimicking

the sound of two guitars. I had no idea
how long I’d been standing there, he said,
I just wanted to listen to it forever and man,
that old stuff really isn’t my thing.

He gets agitated, ’cause he knows
it’s corny as the Nun Bun,
but he swears on his mama’s grave
stony–eyed and serious

the strings on that statue were humming,
those metal fingers were plucking ’em.

I kept looking for the camera,
the hidden microphone, the gimmick.
The old man, still picking, says

Did you steal that line off of me
or was it yours to start with?

The way they laughed together was like
two more guitars in chorus, he says,
before the old man handed him
that battered old Gretsch,
faded off into the darkness,
gone in a blazing instant.

in its smile, takes time
to wander the District
at dawn, listening to silence.

where he got it, he’d come up
with a story anybody would believe
without having seen
some strange shit in her time.

picks his way alone, unaccompanied
into Nervous Breakdown as the cops
come on shift, the dawn breaks.