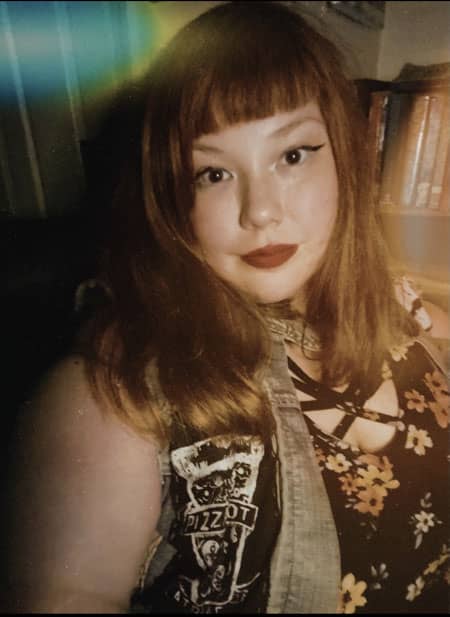 Before they arrived, the visitors announced it by radio: signals traversing galaxies, warping time and particle. Syllables spelled out in numbers and strange hieroglyphs confirming presence and arrival.

Stella knew that there had been stories of people who lived in the stars, the world above the sky, and the people from Earth who’d visited them: holes that opened in the cosmos and had people waking up beyond the stratosphere, staring from above the clouds and down into their old home. There were newer stories, too, of strange lights blinking gold and green, streaking across the heavens, hovering as they hummed a chromatic machine chorus over the sleeping ink-black world below.

What did they want? An anthropological survey. Earth had gasped back into life with cyborg rhizomes, machine seeds scattering hope that stretched horizon to horizon. Metal merged with the primordial: synthetic, but alive, the world breathed green once again. Unama’ki, where Stella lived, had been returned to Mi’kmaq stewardship before she was even born, and Stella was part of her community’s organization that took care of the wetlands. Every time she walked through the swamp, the understanding of time immemorial shone blue sky bright and deep as the shimmering Atlantic that swelled a few kilometers up the coast.

The visitors came in peace. They just wanted to see the restoration. Of course. People were excited to meet the visitors. Of course.

She’d visited the welcome mawiomi, participated in the ceremonies, smiled at the people gathered with signs of welcome in Mi’kmaq and Gaelic. She stood and watched drummers making music that was heartbeat beautiful in her family’s hands.

She tried to ignore the fear and doubt clenching her fists shut. Invasion wouldn’t have to be laser beams dissolving tall buildings to rubble. They all knew that much.

On the edge of what had once been the reserve, the visitors met with Elders and other members of the community. They were shiny Brocken-spectre human shadows ringed with oil-slick rainbow light.

It was the closest approximation to a human they could do, they’d said, a tinny, apologetic tone to their voice. They’d wanted to take a welcoming shape. Energy radiated off them like warm sunlight. It was a word, softly spoken.

Stella still tried not to look at them. They were preparing to walk the marshland. The late afternoon light illuminated the golden sheen on the hybrid trees.

“Kwe’, cuz. We’re going to go to the Old Willow.” Maryann, her cousin, walked up to her.

“E’e, just the edge of it,” Maryann said, “not actually to the whole thing. Clara wants to show them the sunset there.”

Worry surged in her veins. What if they damaged it? They’d all worked so hard to keep that old part of the land as original as possible. The willow had survived for hundreds of years.

“Okay,” Stella said. “I’m definitely coming too, then.” She didn’t know if she’d need to stop them, but she would do anything to protect that tree.

Clara, an Elder and Stella’s ex-girlfriend’s grandmother, led the group. Her clear, strong voice switched seamlessly between English and Mi’kmaq as she identified the trees: ksu’sk, hemlock, stoqn, fir. The shadows beamed and dimmed as they walked, their metallic hum echoing in the humid air.

The visitors explained that time was a spiderweb, each moment a star in a small constellation stretching blue and bright. Clara explained our language, how things are known by what they do, that colors are alive and act as verbs. The visitors shone brighter and emitted a crackling sound at that. Clara chuckled.

They walked the twenty-minute hike to Old Willow. Stella tried not to jump every time the visitors’ brightness changed or when they emitted strange sounds. Maryann wasn’t bothered at all by their appearance or their presence.

“I knew it,” she kept saying. “I always knew they were real.” She didn’t take her eyes off them.

They reached the edge of the authentic marsh where the Old Willow bowed to the still water. Reeds jutted from the soft brown-green shallows.

The visitors tried to move closer.

“Stop,” Stella yelled. Everyone in the group looked at her. Some laughed.

Clara smiled at the visitors. “This area is protected. We can’t go any further. Just wait.”

The shadows retreated back a few steps. The sunlight stretched and sank closer to the tops of the trees. People laughed among themselves, making peaceful, happy conversation. Stella allowed herself to calm.

Sunset deepened pink and orange over the water. Frogs croaked in the distance.

The shadows crackled campfire bright, their rainbow rings whirling around them. The moment stretched infinite around them all, another constellation caught in the spider’s web.