To Blight a Fig Tree Before It Bears Fruit 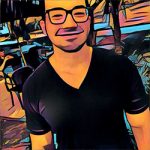 Ben Kingsley is best known for his Academy Award winning role as Mahatma Gandhi. A touch less famous, Affrilachian author Benjamín Naka-Hasebe Kingsley has not acted since his third-grade debut as the undertaker in Music Man. A Kundiman and UPenn alumni, Ben is currently the 22nd Tickner Writing Fellow and recipient of a Provincetown Fine Arts Work Center fellowship as well as scholarships from Sewanee & VONA. He belongs to the Onondaga Nation of Indigenous Americans in New York. In 2017, his work can be found in Best New Poets 2017 (ed. Natalie Diaz), the Iowa Review, Narrative, Ninth Letter, PANK, PEN America, the Poetry Review, Prairie Schooner, & Tin House, among others.

Witness the Meshing. What a crowd has gathered. Reappropriated gallows creak beneath the weight of eight brown bodies hanging. Their wrists are shackled with electric zip ties. Their bellies are swollen to a healthy eight months. Pink worms of stretch marks crawl across the upturned earth of their bellies. Their fate is a downpour of three parts. Here is the finale: the brief connection of lightning between heaven and earth.

Meshee’s hair twists hot and black across her bare shoulders. The yolk of new sun cracked early today, and the stage is a proper frying pan. She wants to lower her hands in a cradle of support around the egg of her belly, but the shackles above her head are deceivingly tight. I must look like some rich girl’s Barbie doll, she thought when they first strung her up. Never in her life have her fingers and toes been so immaculately manicured, glittering a shade of rust; her armpits are shaved, and the iron smell of her odor cuts through heavy perfume; a pumice stone was taken to her heels, the calluses filed off her palms; her whole damn body is lathered in a slippery lotion that gathers in the creases of her thighs, pools in the shallow divot of her pregnant bellybutton.

Sweet baby Jesus, how she wants to die.

As if in rebuttal, the life inside her rolls over.

“Welcome, witnesses—truly, welcome.” A man in a slim white suit gesticulates toward the crowd with both hands. “But, most of all, welcome, our Investors.” He bows to six men in black orbitchairs, just beyond the stage’s edge.

They are ancient as sin.

One by one, they raise translucent hands. Their thin legs are tucked backwards in dark slacks, crushed uselessly beneath bulbous torsos. In the center of each of their foreheads is a single, gaping silver medallion, large as the bearing of a fist-sized wheel. Eagerness is laid bare on their faces. Several are experiencing a swaying vertigo that, were it not for the stabilizing pistons in their orbitchairs, would knock them to the ground. Several are hunched over, relishing the oddity of an unaided erection. All are a chorus of spittle-washed gasps, of heaving chests.

Nothing could be worth enduring this hot sun—the pale skin all but peeling off their impatient faces—nothing but the promise of new life.

At the sound of the auctioneer’s shrill voice, the child inside Meshee kicks and she winces, letting an even more uncomfortable amount of her weight hang from the shackles. Be calm, healthy boy. Easy, my strong son, she wants to say. So badly now, she wants to lay hands to her belly. The drooping heads of the other women lull and bob beside her in acknowledgement of the Meshing’s commencement. Two or three women lift their chins from the sweaty hollow of their throats. They glance sporadically at the gathering of witnesses, but the mothers’ eyes never wander, not even to the edge, of where the Investors lie in pregnant wait.

Meshee understands the procession is something of a marvel, not because she can watch it, of course—the holo playing directly behind her—but because she sees excitement and terror winding across the faces of those in the crowd, the now-writhing mass of onlookers. The holo’s film reels and flickers on the surface of their eyes: the miracle of Mesh Tech. Roaring in speakerphonic tones, the narrator will yet make future Investors of them all:

“TO LIVE AND LIVE AGAIN!”

Meshee’s mother would have called this brujería, voodoo, dark magic. No, Mother, she would have said, it’s science. The pigheadedness of youth.

But now she herself is a mother, and her unborn child will never taste the rush of Spanish syllables on his tongue. He will never talk back to her in an unencumbered voice. He will know only that he does not know himself, but even that—

The cry is guttural, the exact pitch of a meat resynthesizer or a good, old-fashioned garbage disposal. Head jerked backward, chin tipped toward the sky, one of the mothers must have had her vocal cords frozen by the Auctioneer. The mother’s hair falls behind her like a long, black curtain, shaking despite the absence of wind.

What she is trying to scream—the host mother six women down—Meshee can only imagine.

The auctioneer flicks the host mother’s spittle from his palms and motions to one of the ancient men as if to say “We are ready to begin.”

An Investor at the end of the queue gusts forward, his orbitchair purring when its cycle finishes a foot from the mother’s womb. The Investor pulls something—a tip, perhaps—from the breast pocket of his suit and palms it to the Auctioneer who takes it with a bow.

“My dear sir,” he says, bowing until his head is level with the Investor’s armrest.

As he would a child whose ball scuttled into his backyard, the Investor smacks the Auctioneers head aside. While the blow is too weak to pain him, the Auctioneer lurches backward in surprise, gathering his suit around him.

New sun splinters off the disk in the center of the Investor’s head, and Meshee squints so as to ward off refracted orbs of light.

“And so we shall begin!” cries the Auctioneer, returning his gaze to the crowd.

An aid from behind the stage scampers forward, lugging a strange contraption. It is a monochromatic, two-way pump, or billow, or vacuum, Meshee isn’t sure. On one end is a nozzle and the other a needle, and a hell of a needle at that.

The host mother’s guttural whine begins to sound closer to the drowning of a large animal, and the aid brings an upright gurney. She secures the mother’s swollen feet, and straps a brown belt beneath the weight of the Mother’s ample chest.

Then, without a sound, the Investor leans forward and touches the tips of his fingers to the woman’s enormous belly.

He whispers something unintelligible and the Mother’s whine turns into a full-bodied wail. Blood spurts up and out from between her white teeth, trickling down the corners of her carmine lips. Her vocal cords now torn, ruptured, or worse, she makes no further noise after the aid pricks her neck with the needle of a bright pink syringe. The aid glazes a thick, gelatinous substance over the Mother’s belly and steps back, picking up the monochromatic machine’s curved thorn of a needle. She drapes it over one shoulder.

Meshee winces again, a contraction gripping her lower abdomen, radiating down her thighs.

“Be-GIN,” says the Auctioneer, addressing the crowd. He places a firm hand on the back of the Investor’s head and fits the nozzle’s short, gyred end of pump exactly into the silver medallion bullseye. It locks in place, clicking into the center of the Investor’s forehead.

There is no sound now, as the aid has already begun sliding the curved needle down and through the mother’s belly. There is only the swell of shallow breath after shallow breath steaming off the surface of the crowd.

The Investor’s eyes roll white, the same blanched shade as his sagging jowls, lolled open. His hands go limp. His small feet spin like tornado-tossed weathervanes. His lips are pulled back revealing teeth a chatter of discolor.

The Meshing. The Investor and the child.

Meshee puffs small, panicky breaths out her nose and prays to her mother’s god that she still has a choice, that the rumors are true: that the Meshing requires an unborn child—that a born son or daughter cannot be overtaken.

The Investor’s head sags against his chest, dead.

“TO HAVE LIVED LIFE,” howls the Auctioneer, testing for a pulse.

“And to live, again,” says the Auctioneer.

There is blood and a rush of fluid. Viscera spilled and spilling.

There is a child with blanched skin and unnatural eyes.

Urine runs down the inside of Meshee’s thighs, pooling at her newly pedicured toes.

She begins to push. Hard.