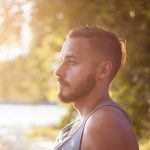 You wake up to your phone crawling across your face, buzzing hard against your cheekbone. Snatch it up on muscle memory and the little plastic cilia retract. The screen is achingly bright, needles your eyes. Squinting, you see an avalanche of notification flags. Incoming calls. It churns your scraped-raw stomach. Something is wrong. Wronger.

Your neck is sore from the crook of the modular couch and one bra strap is digging into your skin. Night’s detritus on the low table beside you: crumpled foil from a Potshop blunt, empty glass sitting between sticky crescents of spilled wine, a souvenir cigar cutter, a mickey of Smirnoff down to dregs, shawarma wrappers. Move your mummified tongue around your mouth, taste vodka and vomit.

Vera is calling you. She hasn’t called you in months.

Vera’s voice is hoarse with tears. “Oh, my god. You haven’t been active yet. Oh, my god, Sav, why would you do that? Why would you fucking do that?”

Panic comes clawing up your throat. Makes it hard to talk. “Do what?”

“I’m so sorry. I’m so sorry, Sav. I have to block you for a while and I might say some shit, but it isn’t real, you know? Everything will be okay. I just want you to know that it will be okay. But, why, why, why did you have to do that? You got listed, Sav. They’re coming.”

Black rubber squeezes in the sides of your vision. Phone skitters in a circle on the floor, buzzing with more calls, more messages, more updates. You dropped it because you can barely feel your hands. Can barely breathe. You gasp the word fuck just once.

Snowman. Prosper bought him even though he knew you were half-allergic. Said you’d get used to it; his cousin got used to it and then never had an allergy problem again.

The night comes back in slippery pieces. Finishing the wine, trying to smile at your reflection, grin stained red, but starting to cry instead. Taking an icy walk to the Depot to get the Smirnoff, coming back, tripping up the steps. Facecalling Prosper over and over, no answer. Being so fucking angry.

Your phone crawls onto your foot so you finally stoop to pick it up, shaking all over. Your feed is overflowing:

So sick, sooo sad. Can’t wait til you get yours

Cant wait till she wakes up, wake up bitch!!!

Fingers trembling so bad you can barely swipe through the flood. A few are double priority tagged. Termination notice from Stop N Fab, but that was coming anyway; you had two lates in a row. Message from Mom, all cracked-heart emotes and demanding how you could do something that would affect the whole family; if it was that bad with Prosper, why didn’t you just say so, just say something.

Clinging to the top of the feed, so small you almost miss it: the Blacklist notification. You thumb it open with a sob building in your throat. It’s brief. Brusque. You’re on the Blacklist. Any attempt to circumvent the process will lead to further penalties.

Sink to the floor. You know you shouldn’t look, but you have to. The bold black B is a magnet. Tap through to their stream, and it’s surreal because you’ve done it so many times but now it’s so different. One of the hosts, Callum Jones, the one your sister used to have such a big crush on, is walking down the street, ranting to a follow-cam. His fitted jacket is shiny-black and his hair is gelled into a perfect halo around his furious face.

“—think we can all agree on that much, I think, you know, every single person in this whole country would agree that this is one fucked-up individual,” he says, enunciating through his gleaming teeth. “I mean, seriously, what the fuck? I’ve had bad days. We’ve all had bad days. Like, every single person in this whole country has had bad days, but guess what? We don’t do that shit. Because we’re, you know, human beings. With this thing called morals? You know? Clearly, Savina Walmsley doesn’t. I mean, clearly.”

You’re dry heaving. Never felt fear like this before, fear that eats holes through your bones and prickles hot and cold all over your skin. Beside Callum’s beautiful head the upvotes are swelling like mad, into the millions, people tap-tap-tapping their agreement. A hundred more feeds spiral off from the main one.

Grainy cam footage of a heavyset man slipping and falling outside the library, someone else rushing past, not pausing or even looking down, and it must be you because they’re wearing your red scarf from Granada.

Of course … fuck this piece of shit. Zero empathy.

Old snaps and Whispas flushed out of hiding, the one where you were so pissed at your calc professor you called her Ms. Cuntley and suggested the only reason she had a job was because she was fucking everybody in admin.

Wow can u say sexshaming ? Someone cares wayyyy too much about other peoples sex life, maybe because hers is nada ?

And it’s Prosper, of course, it is. Wearing the black frames he doesn’t need except to look clever, saying he had no idea how fucked up you are, how he’d be over there right now to collect what’s left of poor Snowman but he didn’t want to get in the way, but he had a grief fund set up if anyone wanted to contribute to that.

You tap back to the main feed and now you recognize the street Callum is on, recognize the dented, green electrical box and the slushy sidewalk scattered with salt. Your street. He has two cops walking with him now, truncheons in hand.

“Probably won’t have to use them,” he admits to the follow cam. “But you never know. If she can do that, if she can commit that kind of moral-violence, not to mention the other violence, you never know, you know? But, don’t worry. Either way, she’ll get what she deserves. We all agree on that. Who bets on her running?”

The poll pops up beside his head and votes pour in. But you couldn’t run if you wanted to; your joints are all loose and weak and watery. And it would only mean more people tapping the stream. More eyes. You taste saline and realize you’ve been crying for a while, tears and snot dripping and mixing. Maybe you should try to get ready before they show up. Some people do that, try to look a little better.

Because everyone will be watching. Everyone. Blacklisting always dominates the news feeds, and yours is no different. You swipe down and down and down, trying to find something, anything, that isn’t your life rendered into its wretched components. There’s some government infoscandal, a nuclear aggression in Mashhad, but nothing anyone will care about.

Snowman meowls, wandering out from the laundry room, the tip of his tail scabbed red from where you tried to snip it off with the cigar cutter, telling Prosper you would mail him his fucking cat one piece at a time if he didn’t come fucking get him.

They’ll be here soon. You sit and stare into space, eyes stinging. Your phone buzzes and buzzes. Snowman walks over and pushes his bony body against your shin, like, feed me. Someone has to.