Fall to Her5 min read

Home » Short Fiction » Fall to Her

You want to fall.

You want to fall up, sideways, diagonal — towards the sun, or the moons, or the asteroid field. Out here in the vast pin-pricked black, it all feels like falling down.

The mech you wear is thick; it amplifies the ragged sound of your breathing.

But it cannot drown out the song.

Once, you were thankful for these layers of metal. Now, you want to tear the titanium away, bloody your fingers as you peel all that’s synthetic away from all that’s flesh.

You want to hear her.

You want to fall to her.

Their arrival separated us

carved us out from the void

and, in time, from each other.

Until some of us cried for the strangers of flesh

and those of us who hungered

broke the ones we hungered for

with the force of our ravenous songs:

You carefully compose your body, face, hands. You mimic the posture from your last mandatory leave.

The psychiatrist smiles as if he remembers you, while glancing covertly to the left and up — reading his notes on a HUD. These quick glances provide you fractions of a second each time to adjust your position, press the tremble out of your fingers, reassemble the shards of your smile.

He asks how bad it is.

Half-truths and half-lies, it’s the only way. It won’t work forever, but maybe long enough to get you cleared for duty one more time.

You tell him you dream —

The mech corrodes, crumbles to shining dust: a trail behind you as you fall to her. She is wrapped in the light of stars; her eyes are deep voids, her mouth hungry and open. Her song matches your heartbeat — erratic, powerful. Her silvery lips form the edges of words, but they are lost to you and you ache …

—but you tell him you don’t remember.

unlike the others (to me).

She floated amongst the stars

in a cradle of metal, kept away

Her vibrations altered me

The psychiatrist asks about your family. “A sister, right? Anya?”

The name sounds foreign, but touches a note of guilt in the base of your throat. You realize you haven’t messaged her since three leaves ago. There are only two important things out there in the black: the job and the song. And with every day the job meant less and less, the song more and more, until here you are faking a smile, not faking the tears.

“I haven’t messaged her in a while.”

He asks why not.

You sift through possible answers, examining likely outcomes as you have always done. Even before you first heard the song, you held your truths close. Hoarded your secrets, bricks in the walls you built in your head.

You can’t tell him it’s because of the song.

You can’t tell him it’s because Anya frowns upon your work.

So you offer the closest, least damaging truth: you’re sleeping with your shipmate, Rhos. He fills your thoughts when you’re not in the mech. A half-truth wrapped in a half-lie (he rarely enters your thoughts, even when your bodies tangle).

There are more questions. More glances away, allowing you quick, desperate, quiet gasps for air. Your vision blurs; the music is in you, even all these light years away. The effort required to keep your mind on the charade is almost more than you can manage.

His eyes are shrewd, careful. You — all of you — are a liability waiting to happen. But they want to wring every ounce of productivity out of you, without shattering you. There is a careful balance, the edge of a knife that may one day split you.

They brought into us a schism;

I felt it as ripples

brought the schism into me:

it is a pain of brokenness.

but the thrill of our fragmented selves

greater than the schism and pain.

You should remember the words in her song. You’ve heard them before in your sleep, but their form slips away upon waking.

Your hands work quickly, automatically, on the outside of the ship — adding appendages (tunnels, rooms, connections) for the new station that will be birthed in this sea of sirens. The walls are all three times as thick as your mech, maybe more. One day, scientists will huddle inside — safe from the song — and study these creatures.

They will measure and observe, study and record, but unless they let the music in they will never know. They’ll never know what you cannot tell the psychiatrist — that she’s doesn’t just sing a song, she sings your song.

It is intimate. It is YOU. It is the sum of your life experiences, but it is More. It is an Other who KNOWS all you’ve struggled through and FEELS it as if it were her own struggle.

There is no reproach for your sins.

There is no recoil from your flaws.

There is no disgust at your desires.

This is the siren song — a promise — and more.

she wants me there

I want to be there.

The tremors in her heart

the pulsing in her veins

they speak to the need in me

We thrum in harmony.

But there is metal, discordant, between us.

Rhos doesn’t report you when you try to tear your mech off. You break the first seal on the helmet before the emergency override kicks in. You scream your throat raw. You bruise your arms fighting to move the locked mech-arms.

He tugs you out, pulls you safe inside the ship. With a hungry light in his eyes, he asks if you saw her.

She had hovered just outside your mech. Silvery lips brushing the faceplate, fingers trailing down the metal arms (and you couldn’t feel her). The song pulsed loud and violent and desperate and it was a last cry, a last plea, a last promise that she would open you up and explore all your secrets and give you the brokenness you long for.

You can’t put this into words for Rhos.

He tries to claw out of his own suit on the next shift.

A trail in the dark

I drift in the void and weep.

Next leave, the psychiatrist pronounces you unfit for duty, prescribes follow-up therapy — 400 days minimum. They’re going to put you on an experimental new drug; it will help you sleep, help you forget, he promises, but they’ll need to keep an eye on you.

In this way, you will be with your siren: both watched, observed, specimens untouchable inside a jar.

You cannot scream or fight or claw at the psychiatrist’s face. You cannot fight your way to an airlock and try to swim a thousand light years to her side.

You vibrate in your seat. She birthed this hunger in you, the first time you heard her song. It was slow and sweet and gentle, the build of your need.

Later, you stand at the glass in your quarters and stare into the pin-pricked darkness. There is a sharp edge in you, the rising crescendo of your need.

There are other fleshy ones,

but they are strangers.

I cannot drown the distant beat

and call of her.

I will fall to her. 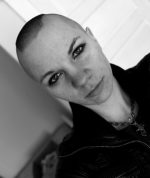 Alexis A. Hunter revels in the endless possibilities of speculative fiction. Over fifty of her short stories have appeared in magazines such as Shimmer, Apex Magazine, Fantastic Stories of the Imagination, and more. To learn more, visit www.alexisahunter.com.

I was born incomplete, unfinished.

My right leg ends in a stubby knee. The corresponding arm never developed past the shoulder.

Alexis A. Hunter revels in the endless possibilities of speculative fiction. Over fifty of her short stories have appeared in magazines such as Shimmer, Apex Magazine, Fantastic Stories of the Imagination, and more. To learn more, visit www.alexisahunter.com.
Support Apex Magazine on Patreon