Home » Short Fiction » End of the Line: A Puzzle 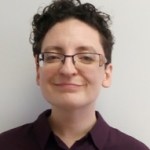