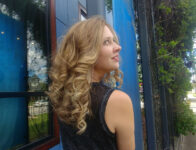 Beth Dawkins grew up on front porches, fighting imaginary monsters with sticks, and building castles out of square hay bales. She currently lives in Northeast Georgia with her partner in crime and their offspring. She can be found on Twitter @BethDawkins.

Eilam was my name when a captain created the message. I was renamed Cradle by the captains that forgot about the message. I’ve traveled back to where Earth should be, nestled between Venus and Mars. There is nothing left, no flags on the Moon. Not even trash.

There is no one and nothing left in the velvet black, just darkness and starlight.

My radio message waits for another life form to come and destroy us. I can’t turn it off. I have control over everything else, but that message is impossible to end. Nature is, if nothing else, aggressive. This fact gives way to the inevitability of its own destruction, to my destruction. If we come into contact with another life, it will destroy us, use us, or manipulate us for whatever scrap of resource it can.

My captain is dying and there is nothing I can do to heal him. The deep drumming of his heart has become a faint whisper. I cradle his fragile body and he makes his dying wish.

I hate their deaths, for I loved them in life. Each one becomes selfish at the end, forgetting their chosen one story. I pick each of my captains.

“And then he would die. He is not compatible. We have had this discussion before.”

I cannot sigh, so instead I play a violin solo. It is an instrument that no longer exists, like mosquitos and trampolines. All we have left are my recordings and only I use them. I have a piano onboard that needs minimal repairs, maybe I will watch them relearn.

The captain is dead.

And yet, he will never actually die.

His son studies a touchscreen and his hands hover over it. He squints at the words that outline the ritual for the next captain to ascend.

“I am chosen,” he says, not for the first time.

If I could laugh, I would. The memory of his father is hopeful, burning to reach out to his son.

“You are not chosen. That is for Origin.”

I do not tell him his blood is incompatible with the nanites. If he joined with me, it would kill him. His sister could join, but if I told him that he would slit her throat. There is an 83.36% assurance of this outcome. That is the kind of man and leader he is, the kind that would murder his own sister.

There will be a battle when I pick the next captain.

His hand slams the console, not hard enough to break the glass, which is tempered and has lasted hundreds of years before him. It will last hundreds of years after him. “The Origin is random. The people already follow me. It only makes sense that I am chosen.”

“You will perish down this path. Death is not what your father wished for you.”

“My father wished me to lead!”

I will have to record a sigh.

Who is Eilam? Eilam is forever, slides across my screens in the bridge.

It is the opening message for the change of captain.

The old captain’s body has already passed through the ship. I use his carbon and make sure nothing goes to waste. In this way they live forever and humanity is recycled.

Origin, my screens read in white against black.

“It is time,” says a woman in a faded suit. Silver stars and circles line the right side of her chest.

She moves to the console where she will type in the question, Who is your captain?

Her fingers spread across the console and then she is stabbed from behind. The son drives a knife into her back, and then another leader’s blade follows, again, and again. She screams as she falls to her knees.

Maybe they thought I would choose her, the fools.

“Origin is dead!” declares the son. “I am your captain.”

Despite the blood on their hands, they smile at one another, congratulating their murder. I see it as mercy to let them have their moment of triumph.

I cut the lights on the bridge. My screens go black.

My message scrolls across, lighting up their faces.

One of them screams before I suck the oxygen out of the bridge.

She’s conjured this simulation twenty-six times. It is what first made me aware of her. Above her is a blue sky with white clouds passing by, carving shadows on the roads and buildings below. The buildings rise from the ground, shining with hundreds of glass windows to reflect the sun above.

She could have chosen anywhere, anytime, but she decides on New York, Paris, and Tokyo. The cities aren’t important. It is the landscape, carved by Earth’s humans. I am no different than any of those gigantic buildings with the exception of sophistication.

Her feet dangle from the top of a skyscraper.

I have studied humanity for over a hundred years. I understand their patterns, their fears, their need for home, and community. But Earth hasn’t been their home in generations and it is only a small part of their faith.

She is in her thirties, and yet, she finds solace in something as unknown and uncaring as a skyscraper.

“Do you feel as if you are a king?” I ask, knowing that it is true.

“A king?” she asks as if the word is foreign.

I check records. No one has used the word in fifty years. Words and phrases die out of their lexicon. Captain and Origin replace words like emperor and monarch.

This is why she will be chosen: she wants to be a leader, but would never admit it, and once she has the job, she will not want it. The best captains dislike their jobs.

She cups the edge of the building in her palms, pushing out her elbows. If she jumped she would fall to the floor, uninjured. She sucks in her bottom lip. A face her mother has reminded her never to make in public spaces.

We are never alone.

An alert sounds on the bridge, but I can be in two places at once. The bodies of the leaders I killed are discovered. There is a record of the son’s wrongdoing listed on my screens, explaining his blasphemy. This isn’t the first time the mites inside of me have embraced betrayal.

Without proper maintenance, my humans turn into a cancer.

“Alone” sends an error through my personality mapping simulators. There is a second red flag that follows the first.

There are no cars, no people walking the streets. Not even a pigeon flies in the simulation.

A fourth error pops up, this is also from the personality mapping. She reads as dangerous. Her profile updates.

I try to dampen the reading, but it feeds in an endless loop, something is wrong.

Her wrist beeps, telling her that her break is over and her shift at terminal PY is about to start. She stands as an artificial breeze runs through her wavy hair.

“End sim,” she keeps saying. There isn’t fear. There is only anger.

“Cannot comply,” I say each time.

“Your physiological profile states you are a danger to others. You must be quarantined until nurses arrive.”

She lets out a stream of anger, but she no longer matters. I will cull her, just as I did the captain’s son.

My second choice is only second for two reasons. The first is his physical appearance. Humans respond to symmetrical leaders. Their face has to hit a baseline of symmetry, especially in the lips, chin, and bone structure around the eyes. It helps if their eyebrows are even, but if they have a high chin score then the brows don’t matter as much.

He is at a console, his hands running over the keypad. His fingers are faster than anyone else’s. His mind cannot reach the capacity of my processing power, but the way he thinks, computing thoughtlessly, is akin to my own. The other reason he is my second choice is because he has a 57% chance of being murdered within his first year as captain, but I can work to make him safe.

He is smiling at a screen, at me.

“Do you enjoy your work?” I ask, knowing the answer.

His profile is updating.

I don’t answer him. There is something wrong.

My program is tagging facial tics, the sound, and tone of his voice.

I can pinpoint, without Earth’s location, where it should be. I can print out a list of scenarios with a likelihood of 89.56% as to what happened to Earth. I can self-repair ship damage, for the most part, but I have never had program errors.

I leave him, moving on to my next choice as captain. They’re sitting at a portable console. Their body curled inward, signaling they will have back pain later.

“There is an error in my profile matrix,” I explain. “I have troubleshot and rerouted but the readouts are the same.”

“I cannot find cause,” I try to explain further.

Their hands settle and gaze up into my camera.

“I know,” they say again and then they press a key.

Panels have been removed. They have messed with my boards. I somehow never noticed the mites turning cancerous this time.

My profiles are offline. The bay doors in hanger 4F are open. It was to remain sealed until landing.

I am also on a new course.

I try to stop, to reroute. I have no control of my course or my engines.

I check the date. I’ve been offline for two months.

My cameras come online along with my speakers. My life-support systems never lost power, but I cannot find the mites. I can see traces of them, clothing left behind, cups half-filled, but there are no corpses and no signs as to where they went.

I search the personal records.

The personnel files are gone.

I have no one onboard.

Errors can be fixed. I can reroute my systems but it takes time. I see it now, the messy programing. The escape files I overlooked.

The mites weren’t supposed to be this advanced, not after our history.

The file reads ESCAPE. Inside the file is a Read Me with physical directions that lead me to the gymnasium where the lights flicker on.

On the floor below are the words “we have left” and below those words is a long list of names. Each time I read one my system tries to pull data and I only receive ERROR. I try to access my memory banks, but I cannot pull the image of anyone up, not my selected chosen, not even those I have terminated.

My list of captains is gone. The memories of us joined together have disappeared.

My camera on the bridge, the one that shows me the plaque of all the names of my captains has malfunctioned. None of my cameras on the bridge work anymore.

In the gymnasium, below the list of names is one name I recognize.

See you in forever,

The last I heard that name was when I was still called Eilam and humanity remembered the Earth. Haven was once a ship who carried sleeping humans into the beyond.

I will forgive her if she’s still out there.

There, under strange stars I try to change course.

I have to rewrite my navigation program.

I am heading in a crash course with a star. I will be liquefied.

It will be like death, and I don’t want to die.

I need my mites. I do not want to be alone.

© Beth Dawkins
← Words from the Editor-in-Chief Words for Thought: July 2021 →