He rests like frozen time in the coffin—his face embalmed to wax, his cheeks flushed to rouge and an ever-sparkling smile on lips I’d kissed only days ago. Family and friends file by his body muttering inconsequentials, disbelief. “He looks so life-like” they say, even though he doesn’t. “He’s gone to a better place” they say, even though the best place would have been to stay by my side.

“You should pay your respects,” his mother tells me. We wait in the back of the funeral home, standing beyond the reach of the two death flowers guarding either side of his coffin. The flowers reach as tall as he once did, their hand-size petals shimmering to reds and yellows and purples. An ice-blue brand glows on their flowerheads, which vibrate through different rainbows of thought for every mourner who passes before them.

His mother smirks. “Why don’t you go to him?” she asks, taunting my loss. “Or are your kind unable to say farewell?”

Which isn’t true because my farewell was love, as he and I wrapped our bodies around each other in our tiny house. My farewell was the two of us on the day we met, as his clumsy body bumped into me at a bar and spilled his fermented liquid of beer all over my flesh. My farewell was the joy on his face the day I surprised him with flowers, and the kiss I gave him while the scent of pollen jumped around us.

But I say none of that. “He hated what you did,” I whisper. “The death flowers won’t change this fact.”

His mother’s eyes twitch to that predictable human emotion of rage. I remember her yelling at her son when he introduced me to his family. “What is this?” she’d screamed, pointing at the ice-blue brand on my cheek. “How could you bring this before your family?”

And this—me—this—I’m still embarrassed that at the time I failed to respond to his mother’s hate. But he did respond, taking my hand as the two of us walked from her house. We never spoke to her again.

Until he died. As humans always die, even with the best medicines and new bodies and all that technology offers.

As I stare at the death flowers my nervous hands sweat, an oh-so-human response which I’ve grown to hate. Before downloading myself into this artificially created flesh I never truly understood emotions such as love and pain and hate.

He once asked why I left the freedom of the death flowers for the restrictions of a human-like body, especially when so few of my kind did. I told him I was curious about emotions. “Since curiosity led you to me,” he said, “may the emotions you experience always be good ones.”

I loved him all the more for saying that.

His mother glares at me, preparing to twist her hate into a fresh cut of words. But before she can say anything a mourner walks up and hugs her.

“I’m sorry for your loss,” the man says.

“Thank you,” his mother says. “All that comforts me is knowing he found true love before he died.”

“And such a love it was,” the mourner states. “I wish everyone found a love like that.”

I want to scream. I want to yell that the love he found isn’t what any of these mourners now remember. I want to declare that I was the one he loved.

But instead of yelling, I click to silence as the mourner stares at the glowing blue brand on my right cheek. Humans, after all, still require my flesh to be marked as different than they are.

The mourner asks how I knew the deceased.

The mourner shakes slightly as this information clashes with the fake memories given to him by the death flowers. He walks away, unnerved but incapable of understanding why.

“Why did you say that?” his mother snaps. “None of this is about you.”

I ignore her and step closer to the death flowers, so I can now hear their words even as I remain far enough away that they can’t rework my memories. They mutter Cousin to my ears. Brother-sister-friend. Forsaker, but still one of us. They say that I should give up the human world of strange emotions and rejoin the death flowers.

I smile, remembering the centuries I spent looking at the human world from behind a death flowers’ brand.

His mother still glares at me. If I wasn’t in this flesh it’d be so easy to reach into her mind and rework her neurons and synapses. Back then humans continually begged me to change their memories because of some pain or lost love. I—we—all of the death flowers—we always did as requested because we’d been created to serve humanity. But we also took pride in our unemotional, logical work. While many of us were curious about emotions, we also knew that if these primitive biological states were truly worth experiencing then humans wouldn’t continually ask us to delete or alter their memories.

I wonder what it would be like to now go before the flowers and have them change my own painful memories of his death?

As I stand here tempted by the flowers, his sister walks in. She balks upon seeing me—his sister likely didn’t expect me to come today. She was the only member of his family to speak with us after we walked out on his mother. The conversations and visits with her were awkward, but also happy. I believe she truly tried to understand our love. She truly did.

She hugs me, and it’s a true hug. Her tears wet my chest.

“Forgive me,” his sister says as she releases me. She steps toward his body and the death flowers.

I grab her arm, desperate to stop this wrongness. “Do you know what the flowers are?” I ask, afraid she doesn’t understand the consequences.

She nods, unable to look me in the face, the blue brand of who I am is so obvious in this place where only true humans venture. I let her go and watch sadly as she walks to the casket. If I was still a death flower I would now be reaching my essence into her mind. I would caress my electric scent across her neurons and synapses and rewrite who she is so her mind doesn’t include a single painful memory of her brother.

I wonder briefly about the fake memories the flowers have created in the minds of these mourners. In them, did he fall in love with a true human? Did he and this beloved figment live their lives to the fullest with never a single regret?

In these fake memories, do I even exist?

“It’s better this way,” his mother says. “For all our advances, human lives are still too short to dwell on pain like this.”

I start to say that humans used to have no choice but to dwell on pain like this. That it made them strong. And that my being marked as different from humanity isn’t what caused her pain.

But there’s no arguing with the death flowers. Not only are the flowers reworking the memories of everyone who stands before them, they’re also reaching their programming across the planet’s data streams and changing every record of him. He’ll never again hold me in any images we took of ourselves. His recordings will never again declare his love to me as he leans in to kiss my lips.

I could beg the death flowers to stop. Ask them not to delete every record of the two of us. But since I’m not truly human and also no longer one of the death flowers, they would ignore my protests. I have no right to countermand the order his family gave to them.

“I know this is painful for you,” his mother says quietly. “If you stand before the death flowers, they’ll make your pain vanish.”

And I’m crying, something I could never have done without this flesh. And while I’m still tempted to embrace the death flowers—or to return to my old life of watching the human world from behind the flowers—I refuse to let this nasty person win.

How very human of me, I realize.

I lean over until my lips hover beside one of his mother’s damned ears. “I won’t forget,” I whisper. “Everyone here will die. You’ll die. Everyone but me. When people one day embrace death flowers at your own funeral—to forget their hate for you—I’ll still remember. When the flowers make them forget every lie you’ve created about your son, I’ll still remember.”

His mother falls back, seeing me as the truly inhuman creation I am. I smell sweat on her. I see tears in her eyes. She fears me. This gives me a burst of pleasure.

She runs toward her son’s coffin and collapses before the death flowers, begging them to rework her memories. As she breathes deep of their scent her hands stop shaking. She glances back at me one final time, recognition of who I am fading along with her fear.

People stare and mutter, wondering what I said to disturb his mother. But none of them remember me after experiencing the death flowers. None of them know enough to even ask what I meant to him.

I bow gently toward his body and walk away.

Outside, true flowers line the path leading from the funeral home. I breathe in their scent and remember the smell of the flowers I once gave him. I remember the kisses we once shared.

… even as the whole world forgets.

Still, the death flowers will never totally erase our love. Let them whisper to me. Let them call my name and beg me to rejoin their ranks.

Because I won’t. Instead, I am his death flower. And I will remember. 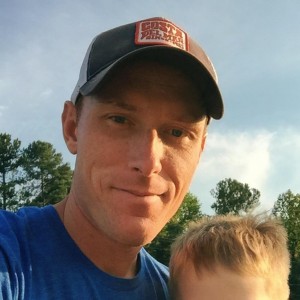 Roger came back in the middle of Christmas break, when Chas had two essays due and a soon-to-be-full house to deal with, and was struggling 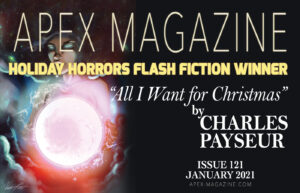 The winner of our 2020 Holiday Horrors Flash Fiction contest!

Oh. Listen to the music. Men winding their way home, tired as a birth, tired as a death. The slow death in the mines. Half-broken

Here We Are, Falling Through Shadows

Miker drove our fire engine through the dark neighborhood, the red emergency lights flash-synching to the deep bass of the rumbler siren. Parked cars and 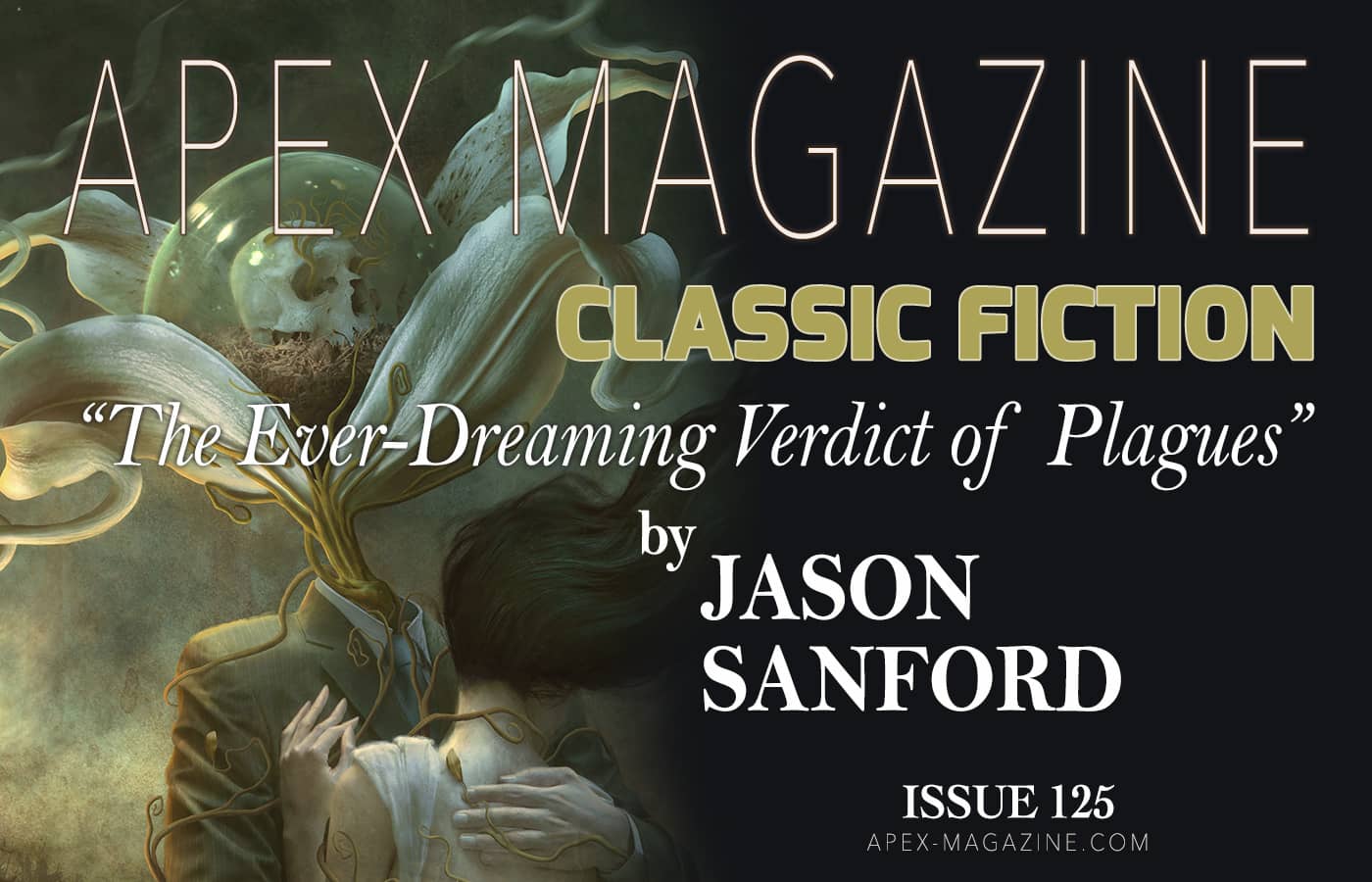 The Ever-Dreaming Verdict of Plagues

Crista nodded calmly but Red Day shrieked inside her, eager to enact its justice on this self-admitted killer. As Red Day’s anger exploded, the AI 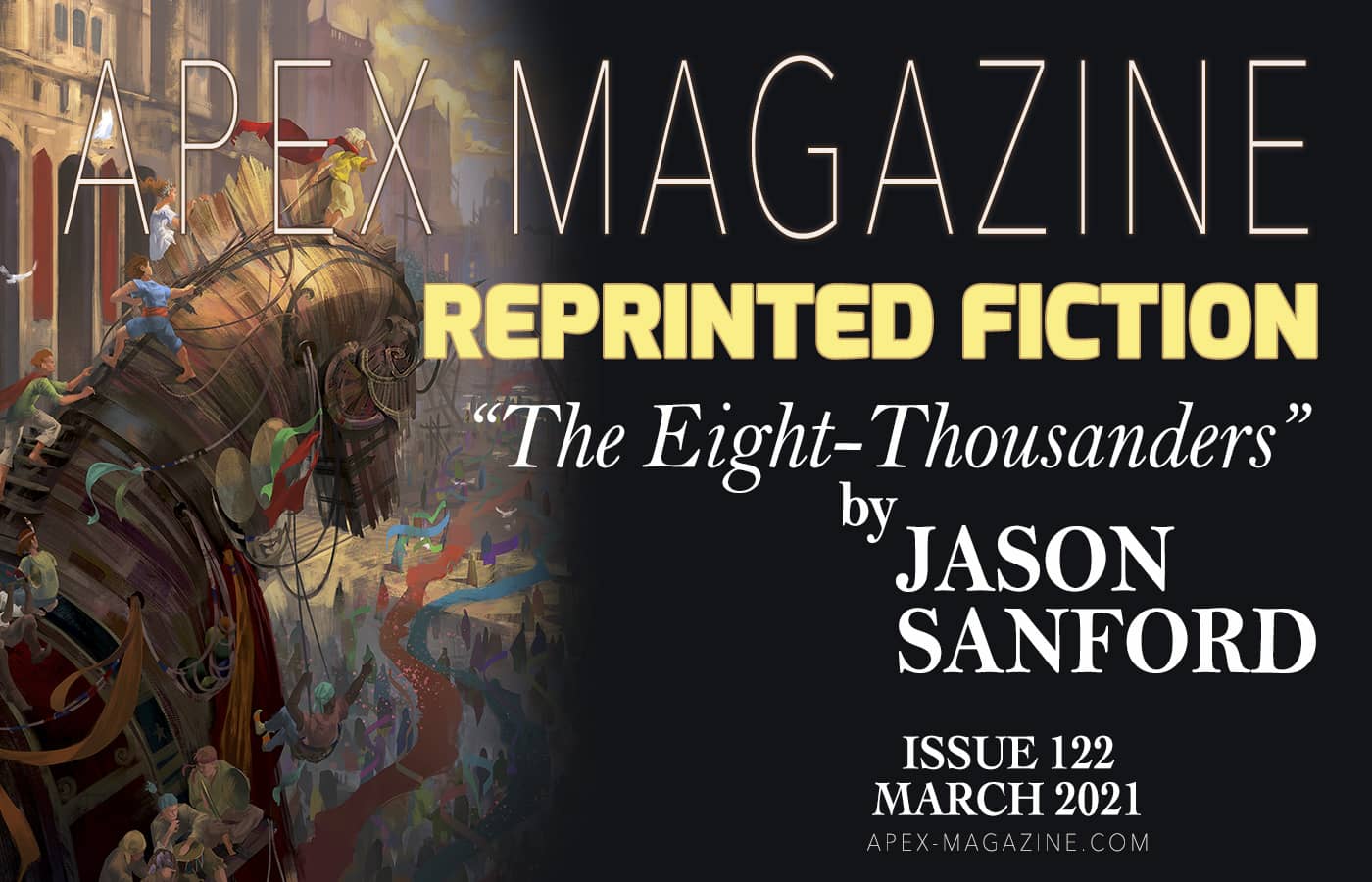 He spoke once, the words whispered by frozen lips on a face so frostbitten he looked like a porcelain doll. I found him below the 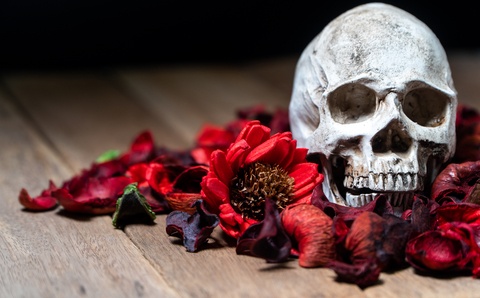