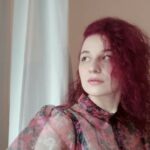 Eugenia Triantafyllou is a Greek author and artist. She loves writing ghost stories. She currently lives in Northern Sweden with a boy and a dog. Her short fiction has appeared in Black Static and Liminal Stories. You can find her on Twitter @FoxesandRoses or her website eugeniatriantafyllou.wordpress.com.

The voices begin three days before someone is to die. The coffin-maker wakes up covered in sweat. He has been talking in his sleep again, his wife says, in the language of the dead.

He looks at her under the waning light of the candle. Edna’s face is pallid and lined with a liquid transparency. Dark circles nestle under her eyes. He kisses her cheek and goes to work in the middle of the night.

The coffin must be of mahogany, he knows that already. An important person will die, a person of wealth and power. He will figure out the rest as he goes.

The coffin whispers louder and more coherently as the days pass.

No, the hardwood explains, as he tries to note the measurements. Not for an adult. This will be a child’s coffin. He clenches his fists and his head stoops more than usual, but he keeps on with his work.

All this time the coffin-maker is locked in his basement alone. Only once a day does his wife come downstairs to bring him bread and tea. She caresses his hair as he leans over his woodwork. She covers her mouth with a handkerchief; a stain of blood taints its whiteness.

The client comes on the second day, as the coffin-maker picks the coffin’s fittings. They are shaped like golden doves that fly towards the sky, albeit wounded. Seems most appropriate.

She is wrapped in a red velvet shawl and smells of expensive soap. The coffin cuts in, She is the mother.

She sits on the only chair he keeps in the basement. He offers her tea, but she refuses politely. When she lowers her shawl, the coffin-maker recognizes her. Mrs. Griggs, the merchant’s wife. She is upfront about it. Her son is dying, she says. It won’t be long. Surely he knows. She points at the expensive casket on his workbench.

Her voice breaks, but she retains an air of pride people of her class naturally have, even when they are begging.

She offers him gold. Double, no, triple what her husband will pay for the coffin. He doesn’t even have to do it himself. She has people. They will take the coffin and turn it into kindling. Then her boy can stay with her forever. He won’t face the darkness.

The coffin-maker avoids the woman’s stare. “It’s against the law,” he says, trying to sound stern. He wishes it were that easy. That the woman would bow and apologize for the disturbance, then open the door and leave. But she stays there, with her red eyes, her pouch of gold.

She is not the first to ask him this, and she won’t be the last. She doesn’t know what she is asking, though. That’s the reason there are laws about this. The dead must be allowed to rest.

The woman gives him a perplexed look but gets up and follows him upstairs.

His walking is slow, burdened. Hers is light and rhythmic, more like dancing. He can hear her heels tap-taping on the stairs.

He gestures towards the closed door at the back of the house.

“Darling, is that you?” Edna’s voice comes from inside.

The smell as they approach is putrid. The woman brings a scented handkerchief against her nose.

He stops in front of the door and turns to face her.

Mrs. Griggs pauses and takes a step back.

He opens the door wide and lets her peer inside.

Even in the half-darkness of the closed drapes and the candlelight, she can see the unnatural shape. The empty eyes. The handkerchief falls to the ground and Mrs. Griggs flinches. A muffled scream escapes her lips.

“I am sorry,” the coffin-maker says, but she is already on her way out.

It’s late and the coffin-maker has to finish the job. He has to varnish the casket. Tomorrow the child will die and once he is in the coffin, it will finally fall silent. But the cherry wood pile he keeps buried in the basement will never leave him alone.