She watched him basking in the dawn by the river, the butterfly man. She gave chase, with net and long legs, and he was eagerly captivated.  She held her breath and him close, and he stayed still in her hands.

She whispered low, when I go to the mountain, you will fly.
His eyes pooled.  Her doubt cut through marrow.  He broke from his back his only collateral, one wing of seemingly soap bubble skin, stretched thin over lace veins.

Without you, I cannot fly.

She left the river slow, cradling her frail treasure.
Her fingertips traced veins in the night as she flew to dreams of him.

Days became weeks, and weeks became nights, and nights were long, long.
She left love’s wing …
… on the seat of a friend’s car.
… in the pocket of jeans in the wash.
… behind the dresser, with 38 cents and one sock.

She checked her watch, and gasped.  She ran from the mountain, through the tall grass. She came to the river and took her old path.

She was breathless when she found him.  The lonely wing of the butterfly man was glowing with the sun.  She hid behind the tallest grasses, crying silently into one hand, the other wrapped around glitter dust and frayed black thread.  He was dreaming of carrying her over oceans and islands.  He didn’t know yet that he would never fly again.

Tonya Walter lives in Minnesota with two children and a husband. When she is not writing and attending tea parties, she works odd jobs and almost starts working on her first novel. This is her first published work. 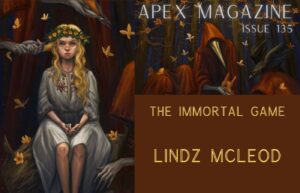 It had all sounded reasonable enough, and she had privately welcomed the break from the crowds and the terror and horror and, far worse, pity