Beyond the Garden Close7 min read

Lena rocked back and forth, feet aching from standing so long, as if the metal floors were harder in the auditorium than anywhere else in the ship. The paper bib she wore rustled as she shifted. The waiting that the high-holy put the prospectives through made Lena nervous. Which was part of the point, of course, and Lena tried not to let her nerves show. There were nine prospectives this quarter, standing in a cluster. Lena knew the other women, but maintained the ship-standard illusion of privacy by ignoring them.

She wouldn’t be among the prospective child-bearers if Phoebe hadn’t wanted a babe so much.

All long-limbs and soft curves, Phoebe had the grace of a goddess, but she’d never be granted child-rights. She had the taint of celiac disease as a hand-me-down from some grand or other and that throwback meant her stock had to be culled from the tree. Even if she made it through the trials today, the high holies would never let her bear a child.

But Lena, now. Lena would pass for sure and certain, only problem was that she didn’t want a child. At least not on her own account, but for her love she would do anything. The memory of her fingers trailing around the soft mound of Phoebe’s freckled breast as her beloved’s nose wrinkled with laughter made Lena want to back out of line, pull Phoebe out of the crowd of watchers and race home. Why change something as perfect as their love? She held her ground. Phoebe wanted a babe.

At the other side of the cluster, the old woman waddled around behind them. She stopped at each girl and put a disk on the base of the skull, where it joined the neck. Lena bent forward to accept hers, sweeping her long hair out of the way.

When the disc touched her skin, the cold sliced through her skull and made the roof of her mouth ache. It would monitor her actions and ensure no cheating occurred. The final trials for the prospective child-bearers differed every time, which didn’t stop people from trying to guarantee that their genes were the ones passed down.

Still waiting as the others received their disc, Lena bounced on her toes. The rituals. The endless rituals of ship life touched every act. Sometimes she wondered if an OCD strain had gotten in, all unnoticed, and infected every line. But it was really just a way to pass the time until the next generation took over and then the generation after that, all biding time until they reached Planetfall. Why did Phoebe want to bring a child into a life of endless waiting for a prize that never came?

The old woman slipped into the middle of the cluster, holding a raku pot. She sloshed water back and forth in the vessel, drawing circles in the air. “Strong, quick and smart. That’s what you need to be. Which of you says you are better than your grands?”

“Aye!” They shouted as one.

She flung the water ceiling-ward over the group of them. Lena bent back, arching so that her bib faced the ceiling as the water splashed off and spattered back on them. Her bib clung to her skin where the water dampened it. When she righted herself, the girl across and to the right–Marta–had not moved fast enough. Her bib was dry.

Weeping, she was pulled out of the group, leaving only eight. Lena had half a moment of wanting to give Marta her spot, of wanting to admit that she didn’t need a child. But Phoebe stood watching and the hope in her eyes staked Lena to the spot.

The old woman bade them all to turn and as dancers, they did. Some girls had spent their whole lives prepping for this moment, and it seemed that their only goal in life was to produce the next generation. If they were near Planetfall, the high holies might have overlooked Phoebe’s ailment, but not this far out. Near the front of the crowd, Phoebe had her arms wrapped about herself, chewing on the cupid’s bow of her lip the way she did when she was nervous.

Lena tried to smile, to reassure her.

Sorted by the amount of water caught, the prospectives were lined up at the mouth of the labyrinth. Lena stood third in line. The door snicked open, the girl in front stepped through into darkness and vanished before the door snicked closed again. Then the second girl. And then Lena.

The darkness was absolute at first. But as her eyes adjusted, she realized a faint glow came from the bib she wore. The water had a bio-luminescence to it. Lena stripped it off and held it in front of her, blocking her view of the bib itself with her hand so that faint glow did not blind her to the things it illuminated.

A narrow space, not much wider than arm-span, stretched beyond the range of the glow. Lena walked forward as quickly as she dared. Time mattered here. The hall twisted and turned, with no branches, but she kept resolutely forward not letting the turns slacken her pace.

A breeze stopped her. Turning, she felt the walls on either side but there was no crack or hint of an opening. Her hair stirred slightly across her back and Lena lifted her face. Cool air dusted her from above.

Lifting her feeble light, she saw a square in the ceiling, handholds visible, just out of reach. A ladder above them. She studied it, until she felt that she’d gauged the distance, then gripped the bib in her teeth. Blind now to what was above her, Lena jumped.

Palms slapped against the handholds, locking around them reflexively. Her body swung forward, carried by her momentum, and slammed against the edge of the opening. Grunting, Lena pulled herself up.

Hand over hand, she hauled up until her feet gained purchase and then began to climb, still blind.

The ladder curved backward, so she began to hang from it. Her left foot cramped as she flexed the toes trying for some traction on the rung. Between one hand hold and the next, light cut on.

Blinded by white, Lena shut her eyes. Tears leaked from under her lids. Two heartbeats were all she gave herself. Time mattered here. When she reopened her eyes, they stung and burned as they readjusted. Lena hung over a fathomless drop into the bowels of the ship. Ventilation ducts, pipes and service ladders lined the shaft until it reached the glowing core of the engine. The ladder she hung from ended abruptly in a wall.

The drop was impossible.

The grands would have had no reason to build the ship that way, not when every iota of space was needed for the generations. Projection then.

But what lay beneath the projection could be dangerous if she misjudged the jump. Lena wrapped her hand in her hair and pulled free some long strands. Dropping the three hairs, they drifted down to land a body length away, appearing to hover in midair.

Lena released her feet from the ladder and let them drop to touch a floor. She flexed her foot against the floor, which felt as though it were hard metal like the rest of the ship. Without letting go of the rungs Lena walked toward the wall where the ladder disappeared. Then she stopped dead.

Having a labyrinth in the ship made no sense if it was only used occasionally. Not when there were other ways of learning the same things about the women vying for reproduction rights. The disc, for instance, recorded her speed and reactions straight from her brain. If it could receive signals, could it also transmit?

“This whole thing is a projection, isn’t it?” Reaching back, Lena pulled the disk off her neck.

The room stuttered and faded around her.

She stood in a storeroom, four of the other girls stood behind her, eyes twitching as if they were deep in REM.

On the far side of the room, a door opened. Light shone in the next chamber. For a moment, Lena wanted to pull the disks off the other girls’ necks, but the door started to slide closed as a reminder that time mattered.

She dove through into Classroom A. The shock at finding herself in familiar surroundings almost confused her more than the darkness had. Calling up a mental image of the ship, she could see how the auditorium was only two corridors over from the block of classrooms.

One woman sat, a blank white mask covering her face with crisp neutrality. She held a Personal Screen unrolled in front of her. “Well done.” The mask distorted her voice, stripping it of identity.

“No. Your scores are very good though, so you get the last part of the trial. One question.” She tapped the PS. “Why do you want a child?”

Lena stared at her. She did not want a child. Not for herself. She wanted a child for Phoebe. Phoebe who loved her. Phoebe for whom she would give anything to stay with. But that was not the answer they were looking for. “To be part of something larger. I want to contribute to the next generation.”

The woman looked down at her screen. “I’m so sorry.”

The door to the far side of the room opened, a silent escort. “What? Why not?”

“You hesitated.” She shook her head. “You don’t want a child, do you?”

Lena’s heart thumped. Time matters. “I don’t. No. But the woman I love does. Give the child my genes and her love. Please.” Her voice broke. “Oh please.”

“I’m so sorry.” The woman gestured to the door. “But we can’t pass on this trait. At Planetfall, a lack of the nurturing instinct would doom us.”

Lena stumbled into the hall and leaned against it as the door snicked shut. She rested her back against the wall and slid down to hide her face in her hands. If she hadn’t hesitated at the beginning. If she had spoken faster, the woman would have believed her.

The urge for a child, never present before, consumed her. This time, it mattered. 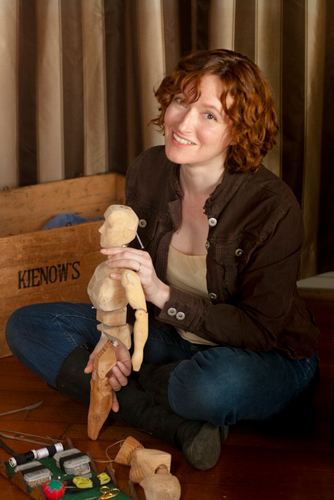 Mary Robinette Kowal is the author of Shades of Milk and Honey, Glamour in Glass, and Without a Summer. In 2008 she received the Campbell Award for Best New Writer, and in 2011, her short story “For Want of a Nail” won the Hugo Award for Short Story. Her work has been nominated for the Hugo, Nebula and Locus awards. Her stories appear in Asimov’s, Clarkesworld, and several Year’s Best anthologies. Mary, a professional puppeteer, also performs as a voice actor, recording fiction for authors such as Seanan McGuire, Cory Doctorow and John Scalzi. She lives in Chicago with her husband Rob and over a dozen manual typewriters. Visit www.maryrobinettekowal.com for more information.

There was once a Padishah who one day found a little insect. 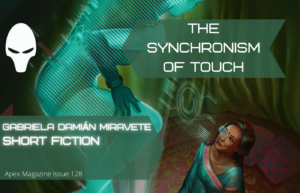 The synchronism of touch

I breathed in. It had a complex smell with many layers. I sniffed until I sneezed. It reminded me of luxury fragrances composed of many

David watched from behind the crowd, as two men led a young woman up a small set of steps to the hangman’s noose. A razor-sharp

Saskia leaned into the darkness above the stage, only vaguely aware of the wood rail against her hips as she retied the left headstring on

The moment Tuyet walked into the Dagenais’s compartment, she knew something was different. The usual pack of dogs swarmed around her, distracting her, before

When the matriarch announced that she was sending the sixteen members of Pimi’s small-family across the ocean to settle in Repp-Virja, Pimi thought it the