Home » Short Fiction » All Things to All People

All Things to All People 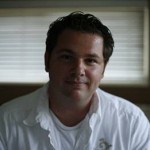 D. K. Thompson (also known as the Easter Werewolf) has written stories featured or forthcoming in Beneath Ceaseless Skies, Bull Spec, Drabblecast, Pseudopod, and Escape Pod, and has lost NaNoWriMo twice. He was the former host and co-editor of PodCastle and has narrated audiobooks by Tim Pratt, Greg van Eekhout, and James Maxey, and others. His collection of stories And Welcome Back was funded via Kickstarter earlier this year and will be out by the year’s end. He lives in Southern California with his wife and three children.

I wake up in someone else’s house every morning, and lay my head somewhere else every night. The tattoos are my only constant company, covering almost all my skin. I’d stretch the free space of my flesh out if I could, but I don’t make or choose the pictures—and I can’t control the size. I’m running out of skin, and I know what that means. When it’s all inked, I’ll be out of time.

The angel here, on the inside of my wrist, that was the first one. A cartoon character—the tips of his wings sharp as knives. That’s as far back as I can remember: waking up on the side of the road with the taste of dirt in my mouth and the smell of gasoline on my hands. The asphalt and the sun had burned my face from opposing sides, like I’d been twice-grilled. Gravel bounced around me as semi-trucks roared by. I flexed my hands—my knuckles were bloody and cracked. I’d been in a fight, but despite the pain, I grinned because I was pretty sure I’d won.

Then I saw the dead man in the ditch.

His fat, shirtless body was covered with illustrations. Flies crawled over him, giving the illusion the tattoos themselves wriggled. But when I slid down beside him, I waved them away, and the ink remained on his skin, still and lifeless. There was bruising on his face and ribs, around his neck. That wasn’t what killed him, though. I didn’t kill him.

I pray a lot these days, as the ink clothes my skin. Beg God to remove this burden from me, take this thorn from my flesh. But I don’t get any answers. Or maybe I do, and the problem is they’re just not the answers I want?

I don’t know if I’m drawn to the people, or if they’re drawn to me, but the important thing is we find each other, and we do our best to take care of each other. That means different things to different people.

Back in June, there was a man evangelizing on a Vegas street corner. He gave me a tract with a picture of a man praying at the cross, asked if I knew where my soul would go if I died tomorrow. Right away I knew he needed grace more than anyone he’d solicited. I told him I loved Jesus, said that Jesus wanted me to minister to him, and bought him a coffee. His name was Harold.

We sat on the curb and he told me about his six-year-old daughter’s obsession with the drums. He’d play a song on his iPod and she’d listen for several seconds, then pound along in time with it. His smile faltered when he spoke of his wife whom he loved, but hadn’t touched since winter. I nodded and squeezed his hand. Harold looked away embarrassed, but didn’t pull back. A little while later, he led me to his station wagon, and we took a drive.

He wept after he came inside me, so I twisted around and held him. There’s no sin in this, I told him. Guilt isn’t of God. It’ll be okay.

I believe that. I really do.

We held each other as airplanes flew through the warm summer, guided by invisible voices in the night.

That night, I dreamed of Harold talking to his wife. She screamed and cried. He cried, too. Eventually, they held each other. Then I woke up.

I was on a park bench, and I had a new tattoo on my calf: a station wagon.

I don’t really like those nights, but sometimes you have to break some people to save others. Last Friday, I’d wandered to the edge of the suburbs, and a group of teenagers pulled up in a shiny Ford Explorer, an H2O Polo sticker slapped on the back windshield, illuminated by red brake lights. They laughed, dangled a six pack out the window, and offered it to me if I got in. So I did, even before seeing the man in the backseat. Freeman. I don’t know how old he was—might’ve been younger than me, but his face was as worn and cracked as a chunk of limestone, and he smelled like more than a single six pack. The teenagers reeked of chlorine.

When we got to the parking lot, they pulled out the brass knuckles, said the beer went to the winner, then aimed their phones at us.

I took Freeman down with two quick blows, one to his gut, then a sharp elbow between his shoulders. When he hit the asphalt, I kicked his thigh as hard as I could. He’d bruise, maybe limp for a couple days, but I didn’t want to really hurt him.

The teenagers—clapping and cat-calling—weren’t so lucky. They were surprised when I turned on them, when I smashed against them. I made sure to leave them with scars and broken bones. Memories. They tried to fight back, but they couldn’t stop me. The places covered by tattoos don’t get hurt, and I made sure to keep my face out of striking distance.

When it was over, I knelt beside Freeman. Told him to get some help. Told him I’d be watching. Then I collected the teenagers’ wallets (fat with bills) and cell phones. Called 9-1-1. I took the six pack from the front seat and stuffed it into my backpack.

I wonder if one day I’ll be back to help those kids? I hope they’ll need a less violent grace then. I hope I still have some skin to spare for their tattoos.

When I dreamed that night, I saw Freeman toss the knuckles into a trashcan with shaking hands, and check himself into a shelter.

Saturday, a fist with brass knuckles was inked onto my chest, like it was trying to squeeze my heart, and keep it pumping.

Sometimes, I try and hide.

Last night, I woke alone in the motel, sobbing. No dreams—I’d avoided any company before falling asleep. The thin pages of the Bible on my bedside table were shuffled—I’d been reading the story of Jacob wrestling the angel, but the pages had flipped to a different passage. The words were in red, but I couldn’t read them.

A fly buzzed my ear. I swatted at it and missed.

The air conditioner rattled, and a puddle formed beneath it. I don’t know if I was shivering from the cold, or from the blood seeping from my skin. Splotchy, red images stained the wrinkled, off-white bedsheets—an impressionistic mirror of my tattoos.

I should know better. It’s not the first time I’ve played the recluse. It’s not the first time I’ve tried to run away and not do anything. But I’m not ready to be finished yet. There’s so many people out there that I haven’t been able to see—that I haven’t been able to help. And there’s so little uninked skin left, I get desperate.

I try to hide. Try to buy time. And then I bleed.

The fly buzzes by me again, and I think of insects crawling over tattoos.

Tonight, I’m with Sadie. She wears long, dark sleeves, and I can see some ink of her own peeking out from under her cuff. A raven, maybe? I can’t see enough to tell for sure, but some kind of bird. Sadie’s not exactly beautiful, but her smile is disarming, and spending a few hours drinking beer with her is the most pleasant job I’ve had in weeks. I think of all the pictures covering me, swallowing my skin. How I’m maybe all used up.

This could be my last act of grace.

My hand shakes as I lift the beer, splashing some onto the wood chips scattered on the floor. I force a smile, and sip the last of my IPA, savoring the bitter hops. I could do worse than spending my last night with Sadie.

I order another drink, and try to get a better read on her. Who she is, what she needs, how I can help her. She’s been quiet, which makes it difficult.

Then I realize I’ve done most of the talking. That’s unusual. So I shut up.

When I do, Sadie smiles and takes my hand. There are letters on her knuckles, a word on each hand. W-A-K-E and A-N-E-W.

She whispers in my ear that it’ll be alright, touches my shoulder. Her sleeve rides up, and I see it wasn’t a bird at all inked on her wrist. It was an angel.

I hold onto her hand, cling to it as tight as I can. If it hurts, she doesn’t show it, just smiles at me, and we leave together.

Tonight, I dream of my own skin, clean and unwritten. A blank page waiting to be filled.

© D.K. Thompson
← Super Duper Fly Me and Jasper, Down By the Meth Shack →