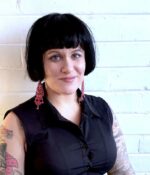 Marlee is a writer of short fiction, non-fiction, novellas and novels. Her work can be found at Terraform, Apex Magazine, Aurealis, Overland, Meanjin, and more. She is the author of the award-winning Orphancorp Trilogy. Marlee likes dreaming of the future, cats, and making a spectacle of herself. She is currently living her dream of being an apocalypse witch and someone’s fabulous goth aunt. She maintains an online home at marleejaneward.com

Of course Mum and Dad have to live on opposite sides of the galaxy. Neither will relent, so I gotta spend halfa Xmas day with Mums, then get my atoms bust apart and sent across the Milky to have reconstituted Turkey with Pops in his sad little hab in the Io mining zone. Ugh.

Pops bought me an optical with his sweet mining-creds so I don’t have to be bored while I stay still during the atom-read. Mum was all like, ‘she’s too young for an optical’, and Pops just grinned, ‘cause it was already installed and everything.

Anyways, the dude on the teleporter’s like, ‘this read’s fuckity,’ and I’m all ‘don’t say that when you’re ‘bout to break me apart, bru’, but it’s too late. I feel that sick breakup and this weird kinda ‘zzhoom’ feeling-noise, then I’m rearranged on Io already, but something’s wrong.

I can feel it. Something clinging to every part of me. Like, every single atom. It takes a sec, but then, boom, Ican feel it. I can hear it.

Dad’s waiting for me with his little red-and-white hat and a box wrapped and ribboned under his arm, but they won’t let me out.

‘She’s been invaded,’ someone says, and Dad goes pale and I dunno what they’re on about. I hear something about ‘alien particles’ and ‘glomming’ and a ‘glitch in the teleporter.’

‘We’re one now,’ it says, singing from every cell. ‘I want some turkey.’