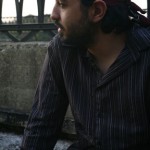 Keith S. Wilson is an Affrilachian Poet, Cave Canem fellow, graduate of the Callaloo Creative Writing Workshop, and recipient of a Bread Loaf scholarship. His work has appeared or is appearing in the following journals: American Letters & Commentary, 32 Poems, Cider Press Review, Anti-, Muzzle, Mobius, and The Dead Mule School of Southern Literature. Additionally, he has had poems nominated for a Pushcart Prize and Best of the Net award.

“at least” is the phrase apologists use
to characterize icharus

icharus, so white
his teeth, icharus, so straight
his gait, his cell phone coverage,

as if those poor teeth were even covered
there in ancient greece, the fried
chicken spots on the toga, the shadow of icharus
the slow strum of feathers
that are hardly worth noting
except when they are finally moving,

as they renovate the sky,

except when lazing about, viscous
and thick, accept the thin hips and whiteness

of feathers, be
in the moment, down

which is to say, as a child,
i never worried much about dragons, here bees
would see in colors i could neither differ nor dream
and i have heard caged raisins sing

and even dance effervescent on the thick lip
of a cup of mountain dew,

as if science or athleticism could save them,
or icharus, who didn’t need to fly to expatriate

for even i have lived
in many countries, i am a settler myself
of ribcages,
couches, language

like many pied things, and when my gullet catches
the dulcet blue groan,
my body a bully of purple light,

i am most at home, there in the shade
of a phalanx, the sun coming down on me
like a surprise

the way that as you advance
with age, all surprises are less surprising,

in wonder, at least
with our age comes an unwillingness to pass

every day i think, more than the last,
now i might die, now i might die
and this little glory, the black birds are taking to the sky,
what are they

© Keith S. Wilson
← The Multiple Lives of Juan and Pedro He Dreams of Salt and Sea →