The Excavation of Troy 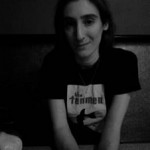 Sonya Taaffe’s short fiction and poetry can be found in the collections Postcards from the Province of Hyphens (Prime Books), Singing Innocence and Experience (Prime Books), and A Mayse–Bikhl (Papaveria Press), and in anthologies including Aliens: Recent Encounters, Beyond Binary: Genderqueer and Sexually Fluid Speculative Fiction, The Moment of Change: An Anthology of Feminist Speculative Poetry, People of the Book: A Decade of Jewish Science Fiction & Fantasy, The Year’s Best Fantasy and Horror, The Alchemy of Stars: Rhysling Award Winners Showcase, and The Best of Not One of Us. She is currently senior poetry editor at Strange Horizons; she holds master’s degrees in Classics from Brandeis and Yale and once named a Kuiper belt object. She lives in Somerville with her husband and two cats.

Schliemann digs by day in the winds of Hisarlık,
prospecting for myth with digammas and dynamite.
His children’s names roll like the sea
grounding black ships on burning shores,
his wife with the hair of a saffron gatherer
looks past the camera as if to Paris at the feast;
year by thousand years, thirteen Troy towns
give up their gold as one.

The woman comes each night on the boat from Ithaki,
steered by her husband with a soldier’s sea–mazed eyes.
Her jewels are a handful of olives, sucked salt on the journey,
a loom–brown woman, the lines of her mouth warp and weft.
With wool–worn fingers, she ravels the earth of Ilion,
amending all that picks and photographs may do —
cups, cauldrons, dry estuary shells anonymous
as the beloved profile beneath a draping shroud.

She shakes time out, folds it, leaves it flat as a tarp
while her husband talks Turkish, offers almonds
to the guards at the site.
In the morning, Heinrich digs for his childhood city,
sifting dirt again and again
for the tangible, not the true.

© Sonya Taaffe
← Half Wives On the Excarnations of the Gods →