Home » Poetry » The Djinn Prince in America: A Microepic in 9 Tracks

The Djinn Prince in America: A Microepic in 9 Tracks 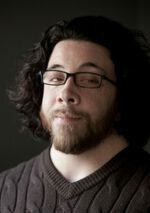 Saladin Ahmed has been a finalist for the Nebula and Campbell Awards. His fiction has appeared in Strange Horizons, IGMS, Beneath Ceaseless Skies, Clockwork Phoenix 2, PodCastle, and other venues. His fantasy novel Throne of the Crescent Moon is available from DAW books. His website is saladinahmed.com.

1: Astronomy and that dude across the street
The sky is a lonely shade of cobalt, the color of television spied through the windows of an ex-lover. A hard sliver of day-moon is visible, a wickedly curved bit of impossible silver like the manicured sci-fi fingernail of some high school hoochie who he never had a chance with poised to strike a precise puh-leease incision into his ventricles. On the smoke-scented streets, couples pass by, binary stars giving off residual light for thousands of years after the last burst of heat-energy. Him? He’s nothing but a sputtering comet, glowing with the weak-ass purple of a faded Adidas sweatshirt, pushing his way through these cosmic dust clouds slowly, with a pathetic lack of pyrotechnics. All the while stale, self-pitying tongues of flame lap at the edges of his cold, rocky, center.

2: An Apology To Our Hero For A Subway Nudge From A Fellow
Storyteller Sleeping Beneath A Blanket Of Newspaper
Forgive me, Papi, if I mistake your
earlobes for my bootstraps.

But I have too few remaining
weeks on this earth and I
have realized that I am writing
the poems of a dude
much more mad than myself.

3: Day-glo green distractions from anticapitalism
And here he is in the white man’s Manhattan. Sky textured with testaments to avarice. He sees gorgeous orange brick, whittled white stone and mirror-grim glass. His thoughts are on blood, bone and cist-matter. He sees the strong blue arms of the sky torn open by antennae, clouds bleeding out slowly. He is filled with righteous fire and has visions of the kisses of hot surgical steel and scorpions. But then he catches the lilac blast of a certain scented soap and damn, man, he’s slammed back to a Beirut balcony, fresh Mediterranean beneath, the kiln of the sun, the furious cerulean of that sky, and the cooking concrete crossed by Jordanian girls in two-piece bathing suits.

4: Over The Phone, One Of Our Hero’s Close Personal Homeboys
Recounts Life In A College Town
I miss having you around too, dawg.
Listen to my wack-ass routine:
The Great Hand makes a striking motion,
and the day is cracked open,
sliding onto the blazing iron of the world.

I imagine myself as the yellow center:
inconstant, supple and relaxed
until forced to harden against
the whiteness that surrounds me,
the encroaching blank.

5: Goin’ goin’ back back to
Rolling past the hairy green hills of San Francisco, a fog begins to part. The steel and belching smoke of Oakland taunt him with promises of home. Before this day is out, wings and wheels will steamroll hope and the ghosts of eighteen Eastern girls. He will leave wide miles in his wake, make minarets in his head and feel Nike prints on the back of his neck. And yes, days later, while stomping through hard Harlem muck and rockin’ a look of “don’t give a fuck,” while walking backwards through the sliced-open blue fruit of morning, he stops, staring at a pink ribbon across the sky, and for a lonely moment the birds—varied in shape, color, and philosophy—are the loudest screaming species. Following a trail of chicken bones and Newport butts, he spots the hot promise of small New Year’s dragons whiskering their way through the painful near-dark with sparks of ruby, gold and jade. They sing to him of the West Coast, they sing to him of libraries.

6: The Third World Werewolf Speaks To Our Hero
Of Life In The Financial Zone
In a word, brother, it is dangerous—
Silver is too easy to come by in this country,
and they confuse the moon with lasers and smog.
But even a half-man has to make a living.
I will have to hide among them until the time is right—
I’ll have to hide, one-eyebrowed,
a computer folded beneath my arm.

7: Fresh in negotiation with finite
He has long believed in Allah’s revealing truth through a few small, soft words uttered by a caramel-complected, well-read girl of nineteen nations. He has long believed in the power of these words to rip universes from their midnight blue backdrops and rearrange the planes of existence. But in this city where one is forced to live in the future, forever traveling among bedrock and rats, his faith begins to waver. Moving through a tangle of colors and letters, the possibility looms – perhaps tomorrow, breathing a cloud of pink lilies and linseed oil—that he will reach an edge; find himself nailed by tiny titanium tacks to a grey-white wall—coffin-colored and undramatically grim. To prepare himself he dons a breastplate of orange butterflies and a cloak of green tornado skies. He seems nervous. For some reason, he diffuses ink molecules among paper molecules for thirty-three minutes, and eyes a white knife.

8: The Drunk White Man With The Cowboy Hat And The Illegible Sign Around His Neck Disturbs Our Hero With His Park Bench Prophecy
The small room, that college town, that
strange smell of summer and espresso!
Those evenings spent on sangria and record scratching!
Ha! Be careful, boy. These things can strike
your chest like a sledgehammer!

LISTEN to me, boy!
This is not meant as hyperbole—
a sledgehammer to the chest
breaks bones, crushes muscle,
tears open the spaces between ribs
—not hyperbole!—I been in love
and I seen a baseball bat
strike a standing man’s skull.

9: Elegy in the shadow of a newly built casino
This, then, the mystery to him: after digging through dusty tomes seeking an elusive beat, after unsagely searches for knowledge in the dustless corners of the Internet, after filling his nostrils with the petrol and spice of Casablanca, after gazing wearily at the minefields and green mountains of Lebanon, after shouting revolutionary slogans in the wrong language under arches and serpentine glasswork, that he should be here, in the great grey sweep of Southwest Detroit, city of soul and motor, amid houses broken as bones and large dark cars barreling through the night, forcing his way through the purple press of burnt landscape and folding his mind around fundamental truths: the pull of collapsed stars, whiffs of acrylic paint, a girl’s dark eyes, the obstinate smell of Zen in her hair, the promise that she will dig him, that she will make nightsleeping possible for him, that she will worry over him, her finger in his asshole—fundamental truths: the grip of a sympathetic homeboy on shoulder and the winter-breathing night sky of his city, its clouds like ink in dark water, its moonbeams lancing gang handshakes, its one thousand and one rough reunions.