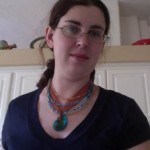 Amanda Lord majored in English, decided writing was an unlikely career path, and went on to get a degree in library science. After a few years in libraries, she decided that perhaps writing was a better path afterall. She lives in a dilapidated Victorian in upstate NY with her husband Joel. Her poem “Harpsong for Heurodis” was published in issue nine of Scheherezade’s Bequest. Her short story “Red Dust” appeared in the sixth issue of Crossed Genres and in their first anthology. In addition to writing, she is a traditional storyteller who dabbles in playing the harp.

That’s where it started.
One question followed by a challenge,
an appeal to Superman’s better nature.
So they took him to the turbines,
and put him to work.

As God said, “Let there be light.”
Light and refrigeration and cell phones,
as he ran on and on.
One day of perfect, clean energy
carried on his sculpted shoulders.
That was all it was supposed to be.

Now he runs alone —
grinding the gold for Froði’s children.
The rooms beyond him
glow sickly green.
Lois imprisoned for
leaking state secrets.

He doesn’t know he’s not the only one,
as his legs blur, feet rising and falling.
We fed our best to the singing wires,
but no longer fight for fossils,
no longer dirty our skies and water.
We celebrate a perpetual summer bounty,
and have no place to walk away to.

He can run forever, can’t he?