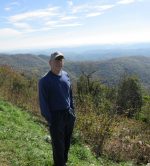 Peter Venable has written both free and metric verse for over fifty years. He has been published in Prairie Messenger, Torrid Literature Journal, Third Wednesday, Windhover—A Journal of Christian Literature, most recently Flying South 2016, and others. He is a retired clinician, volunteers at a prison camp, seniors’ center, and food pantry; and is graced with a happy marriage, daughter, son-in-law, Emma and Yeshua. Visit him at petervenable.com.

Resembling a migraine
spreading over my visual field,

Hubble pictured stars incubating in fiery tips
Six trillion miles long into gaseous bulbs.
They appeared as late-night peninsulas,
contoured by neon glare in a nebula
seven-thousand light-years away and as old.

The ancient questions still bewilder me.

“Why more nothing than something?
Did something come from nothing—
or was there always something?
Are we from a ‘what’ or a ‘who?’”

My first wrinkle is an asteroid fissure.

My first gray hair is a comet’s tail plunging into a dying sun.

Dread, a frozen moon, orbits around my bedroom ceiling.