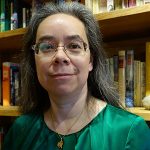 Mary Soon Lee was born and raised in London, but now lives in Pittsburgh. She writes both fiction and poetry, and has won the Rhysling Award and the Elgin Award. Her credits include Analog, F&SF, and Strange Horizons. She has an antiquated website at https://www.marysoonlee.com and tweets at @MarySoonLee.
Not like this,
it wasn’t meant to be like this:
rain, wind, water, night,
King Xau staggering
out of the churning river
beside a staggering, stricken horse,
the horse’s foreleg spurting blood,
skin hanging in ribbons;
Atun examining the mare
by wavering torchlight,
shaking his head;
the look the king gave him then.

Like this,
it was meant to be like this:
Atun, one of King Xau’s guards,
accompanying king, queen, princeling
on a state visit to Ritany,
his bow ready but unneeded,
the arrow of his life
flown straight.

Not like this:
their visit to Ritany
coinciding with its worst flood
in three hundred years;
refugees struggling mile on mile to the ford,
but the river fickle, furious, fast,
too powerful to cross
even at the ford,
the Ritan army overmatched,
King Xau and his guards
trying to help.

How the world should be:
as it was, eight years ago,
when eighteen hundred wild horses
followed the king from the hills
of the horse country,
and Atun, twelve years old,
prostrated himself on the ground;
the leader of the horse lords
bowing so low to Xau
his braid brushed the dirt;
the greatest day of Atun’s life,
though he did nothing
but watch.

Not as it was at dawn:
the Ritan commander eyeing
Atun’s braid, Atun’s silver armbands
as though Atun were a savage.
The Ritan cavalry, Xau’s guards
trying to persuade horses
into the ford’s foaming fury.
Failing.

Nor as it was at noon:
supports shearing, splitting, splintering,
the army’s attempt to build
a wooden bridge over the river.
Failed.

Perhaps this, the hour after dawn:
sixty horses followed the king
into the churning water;
stood, stoic, one in front of another
—a wall across the ford—
people wading along that wall to safety.

And then, repeated all day into night:
Xau leading spent horses from the river
into Atun’s care (the horses exhausted, cold)
while others tended the king (exhausted, cold)
>before Xau led fresh horses into the river,
staying with them, speaking to them.
Over and over, six times over,
and each time the king put his hand
on Atun’s shoulder and thanked him,
and Atun (weary, shivering, rain running
down his braid, down his back)
filled then with pride.

But not like this,
it wasn’t meant to be like this:
rain, wind, water, night
when the king staggered out
beside the torn horse.
Only the stricken horse
and the two of them then,
all else shadows, torchlight, wind.
Shadows that shouted
that there were other horses,
that the king must rest,
that did not understand;
what the horses had given must be honored.
Atun inspected the horse’s leg,
shook his head,
offered his sword to the king.
The shadows shouted,
the king swayed on his feet,
but Atun steadied him
so Xau could raise the sword.
The horse’s neck divided on the blade.
Shadows. Water. Wind. Blood.