Myrrh, and the Sun3 min read

Home » Poetry » Myrrh, and the Sun

Myrhh, and the Sun

Sun on the grey and the sap-gold

Turning from there, from the myrhh, going to the door

way out, standing, one hand leant

on the empty ledge, looking out

on the empty city. There used to be people here

there were always people here,

flocks on the hills, stupid and stinking,

grapevines strung up on their poles

raisins drying in their sheds

the check-pattern of bricks letting the wind through.

The raisins that are left still dry and are

pecked by sparrows, who dart in

chirruping certain they will not be chased off.

The raisins that are left are dried so dark now,

so dark on their vines that they curl in on themselves

tiny black-brown bugs, the water gone out of them

the buds of their seeds pushed tight against the grapeskin

the grapeskin shrivelled a maze of wrinkles in on itself.

Some hang tight to the vine, some

at the slightest touch, fall

into the beaks of sparrows or

to the floor for the mice and ants to find.

The land around the sheds is as it ever was

Dry in the winter, with white-skinned aspens growing reluctantly up out of it

dry in the summer, with green flecks of fallen or dropping grass

dry in the fall, when the weather cools and the leaves grow old-green

There were people here. They built the drying sheds.

They grew the grapes. They held the flocks.

They planted the grown-wild gardens, and buried their dead under those long, coffin-shaped stones.

the powerlines to out here were first to go

the wind-farms that turned their slow sails in the mountains

stopped their revolving, one by one

as no one came to repair them, they gave up

The big cities—those were the places not to be

they ran out of food first

the people running, hiding out in the farms

taking their cars and driving out as far as they could

and when it reached them the cars breaking down in the roads.

The apartments are long clean. The cities stank for a few days, but

ruffled, sure, by the speed and shuffle of grabbed property,

mussed by the sudden disappearance of quick-snatched valuables

but, on the whole, mostly as they had been when it came over them.

Out here, life continued. The city

had never done them nothing. It had tried—when there were people, they’d come out here

in their trains and administrated; they’d set up great, blocky buildings,

presided over by a beneficent statue of poured bronze.

Having no farms, no land, nowhere to go, when it came, the cities

When it came, it was not so sudden.

A family here, a family there.

One would not come back from herding the flocks.

Another would go to pull carrots for the pilaf

and would not return by the time the grease had heated.

stopped in a waspy parkinglot.

It came over them, and then,

after a long, low sound

for was there not wind? and the rustling of leaves in the trees?

and the sun on the parching earth, and the buzzing of wasps on new meat?

Now the warm rays beat down on the red mountains

they brighten the pearly grey stream where people once hunted jade.

houses a thousand years ago, a thriving city of seven thousand

still and crumbling these past five hundred

silent now except for the wind. 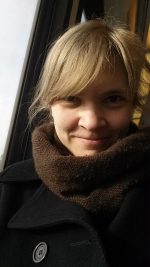 Lara Ek is a Hungarian-American who long taught English in China and now works with international exchange. Her previous publications are in The Colored Lens, Crossed Genres, the Dieselpunk Anthology, and the Q&W Old Weird South Anthology, among others. She speaks enough languages for half of her fingers, is interested in everything, and has walked among the raisin huts of Xinjiang and the melting ruins of Yar/Jiaohe, where this poem is based.

Lara Ek is a Hungarian-American who long taught English in China and now works with international exchange. Her previous publications are in The Colored Lens, Crossed Genres, the Dieselpunk Anthology, and the Q&W Old Weird South Anthology, among others. She speaks enough languages for half of her fingers, is interested in everything, and has walked among the raisin huts of Xinjiang and the melting ruins of Yar/Jiaohe, where this poem is based.