Home » Poetry » And Cut Down a Moment Later

And Cut Down a Moment Later 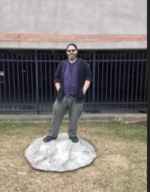 Erik Amundsen is pictured here having tracked and defeated the winter of 2013–2014. When not pursuing vendettas against the seasons, he lives and writes poetry and short fiction in central Connecticut. You can find him at Clarkesworld, Strange Horizons, Stone Telling, and Goblin Fruit.

Light creep down the stairs,
each day, a different plan of attack
each angle a different disposition
the great face plate of the sun,
a golden shield, but beneath it,
beautiful robes that you never see.
And in his hands a sickle and a scythe,
the corn bends up to tickle him
and cut down a moment later.

The women sing in rows,
where a creek a river and a road
run parallel, and the song so low
so peaceful, makes you think
it’s all over already. A warp
in the sky, spots in the eye, the tower
leans toward this bright new thing
and cut down a moment later.

Head aching with the sound,
thin little threads of visions of heavens
full of sweet popcorn and cheap treats,
making out in the cheap seats,
but down those stairs, further down
than the sun ever goes, here is everyone
all-ages general admission,
a pomegranate little queen,
seated up in glory down below,
in her hands a scissors and a sigh,
the thread whines with a wish to never die
press the blades together,
and cut.

© Erik Amundsen
← Down Cycles In Search of a North Countrie →