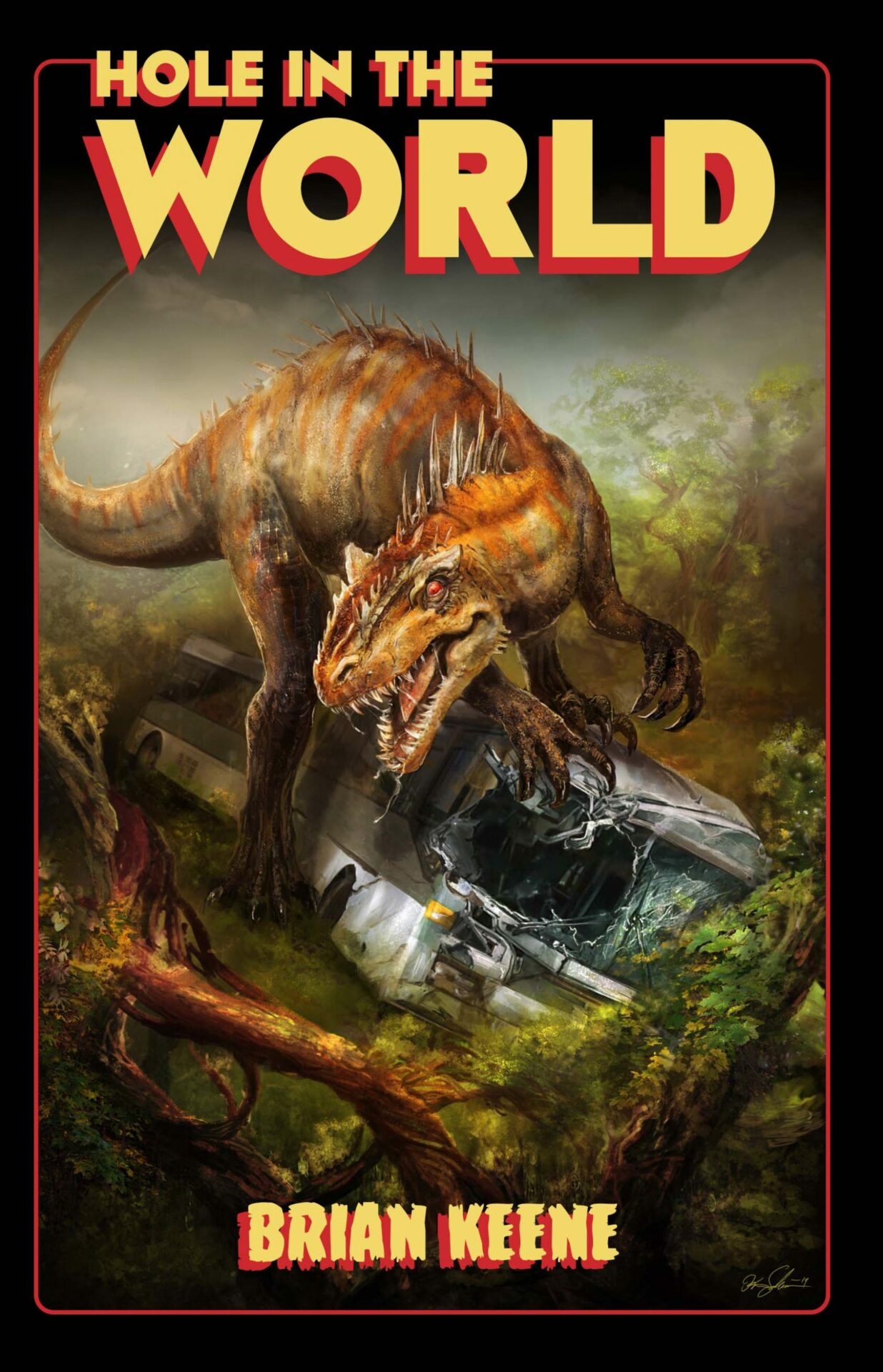 RIDERS ON THE STORM

At least they’re not talking much, Lucinda Hawkins thought as she eased the airport shuttle bus through the blizzard. Lucinda had been awake for seventeen hours straight, was well into overtime, and had a vicious migraine forming behind her temples. The coffee cup in the drink holder beside her was cold, the coffee inside it was even colder, and the bus’s heater was lethargic at best. It wheezed like an asthmatic robot, belching out pitiful, lukewarm drafts of air. Lucinda gripped the steering wheel and stared straight ahead into the storm. She couldn’t see more than a few feet ahead of her, and although the plows had gone through only moments before, the road was already covered again with drifting, blowing snow. Lucinda was tense, tired, and pissed off. Yattering passengers, angry over their flight cancellations, would have only added to her stress levels. A few of them murmured into their cell phones, but for the most part, they sat in uneasy silence, watching the snow fall.

As often happened while she was driving, Lucinda’s thoughts turned to her granddaughter, Mikya. Her mother, Lucinda’s daughter, had passed away two years ago after a quick and unexpected battle with ovarian cancer. The girl’s father was currently serving twenty-five to thirty years at the Maryland Correctional Institution in Jessup. He was allowed two visits per week, but had expressed no interest in seeing his daughter, and indeed, hadn’t even added Mikya or Lucinda to his approved visitor list. Lucinda was raising the five-year-old on her own, something she hadn’t expected to be doing at this stage of her life. Raising children was hard enough when you were in your twenties or thirties. To be doing it again at age forty-eight? That was exhausting.

Mikya was with a neighbor tonight, one that Lucinda trusted, but she also knew that the little girl would be upset about spending the night there. Since the loss of both parents, she’d clung even tighter to her grandmother. Lucinda hadn’t minded, though. After two ex-husbands and the death of her only daughter, Mikya was pretty much all she had. Mikya was Lucinda’s whole world, along with her few friends from church, and this stupid job.

A snapshot of the little girl was taped to Lucinda’s dashboard. Next to it, tucked into the console, was a paperback copy of And Then There Were None by Agatha Christie. Lucinda had checked it out of the library last week, and read it during her lunch breaks. Judging by the weather, she’d be lucky to get a lunch break tonight.

A passenger seated behind her raised his voice, apparently losing his cell phone signal. “Buzz? Buzz, are you there? Oh, you stupid fucking cock-sucking phone!”

Lucinda frowned. She debated asking the man to watch his language, but she didn’t want to start an altercation. He already seemed wound up. If he became any more belligerent, it could distract her from the road. The storm seemed to be growing worse.

Across from Lucinda, beneath a blue handicapped sign, a bespectacled man in a wheelchair stared at the angry caller, his expression impassive. Seated next to him was a short, thin man, who was nodding off and apparently oblivious to the commotion. Lucinda glanced at them and then turned her attention back to the road. She wondered how anyone could be sleepy in the midst of a blizzard. Then she remembered that she had heard him speak when they first boarded the shuttle. He’d had an Australian accent. The time zone difference was probably catching up with him. Poor thing.

“Buzz?” The irate passenger’s voice grew louder. “Shannon? Are you there? Goddamn it! This fucking phone …”

Sighing, Lucinda focused on guiding them safely through the storm, and tried to tune the man out.

Paul Legerski stared at his phone in annoyance. He had three bars of coverage, yet the call had dropped. Noticing that the screen was smudged, he wiped it off on his San Jose Sharks jersey, and then tried redialing Shannon again. He watched as the signal bars rose to five, then dipped to one, before finally settling on three again. It looked like the call was connecting, so he brought the phone to his ear.

“Buzz,” he said, calling Shannon by her nickname. “You there?”

“I’m here, Paul,” she replied, “but I can barely hear you over the noise.”

“There’s a weird background noise. It was there before the call dropped, and now it’s back again. Don’t you hear it?”

“More like a blizzard,” Paul said. “Listen, let me tell you what’s going on in case the call drops again. They’ve cancelled all flights out of Baltimore. The airport is shut down. I tried to get a flight out of Washington-Dulles, but apparently they’re closed down, too. The airline is putting us up in a hotel tonight, at least. I’m on the shuttle now, heading to it.”

“Tell me about it. What’s the weather like back there in Corona?”

“Sunny and warm. You know how it is. Typical California day.”

Shannon’s voice was suddenly replaced by another, as if their call had intersected with someone else’s. The new speaker was male, his tone gravely and harsh. It reminded Paul of the Klingon’s on Star Trek. Paul frowned as the voice overrode Shannon’s. The language was like nothing he recognized.

“Buzz,” Paul said into the phone, “if you can still hear me, I’ll call you back when I get to the hotel.”

Paul disconnected the call and stuffed his phone in his pocket. Then he glanced across the aisle and noticed a paralyzed man in a wheelchair staring at him.

“Phone,” Paul said with a shrug. “Bad connection. Must be the storm. I’ve got a signal but the fucking call keeps dropping.”

The man smiled, indicating what Paul assumed was sympathy. For a moment, Paul imagined pushing the man out into traffic, or straddling his wheelchair and slowly strangling him to death. His penis began to stir and twitch in his pants.

Careful, he thought. You keep daydreaming about shit like that, you’ll get a hard on right here in the shuttle. That wouldn’t do. That would attract the wrong kind of attention, and you can’t afford that …

Paul looked out the window, watching the snow fall. He’d never seen anything like this. Snow, yes. As the owner of his own environmental consulting service since 1997, he’d travelled all over the world, and seen plenty of snow. But he’d never experienced a storm like this one. It felt almost apocalyptic. He marveled at the size of the drifts along the road and idly wondered how his Tesla Model S would perform in such conditions. Probably not very well.

He considered the flask of Maker’s Mark in his suitcase—checked with his luggage so it wouldn’t get pulled by security when he was boarding—and debated having a drink. Then the bus slid to the right, jolting all of the passengers before it lurched back into the lane. A few passengers gasped in alarm, and murmured among themselves. Paul decided against standing up and rummaging through his suitcase. There would be time enough for a nightcap when they reached the hotel.

No time for killing, but time for a drink.