Not Here to Check Boxes 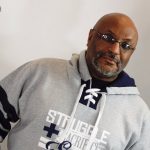 A few months ago, Jason Sizemore approached me about guest-editing an issue of Apex Magazine. I was a little suspicious of the timing as it came soon after the release of the Fireside Report which concluded (shockingly!) that the marginalization of black people is still a huge problem in publishing. I responded that I didn’t want to be some sort of “tag-a-Negro” check off item. But also that Apex Magazine had nothing to apologize for. While there’s always room for improvement, Apex has always been a leading light for diversity and inclusivity.

Jason assured me that this was about celebrating the fact that I had a short story collection, The Voices of Martyrs, coming out (three of the stories first appearing in either Apex Magazine or one of the Apex Books’ anthologies) and a novella from Tor.com, Buffalo Soldier. He wanted to celebrate our ten-year anniversary of working together. Ten years since the original Apex Science Fiction and Horror Digest published a short story of mine, “Broken Strand.” Then a novella, Orgy of Souls. Our relationship continued to see me edit Dark Faith and Dark Faith: Invocations, write another novella, I Can Transform You, as well as stories in a half dozen Apex Books’ anthologies.

I approached editing this issue the way I do all my editing projects: I reached out to a dream list of writers I have always wanted to work with and made sure that the word got out in the various spaces I hang-out. One of the conclusions I’ve come to is that diversity doesn’t just happen. Back in 2006, Jason approached me about submitting to Apex Digest. There’s something about the extra effort of reaching out to marginalized folks to signal that yours is a truly welcoming market. This is a conversation Tanya DePass picks up in her essay, “Time to get serious about diversity and inclusion,” regarding the next steps in creating more diversity in the gaming industry (FTR, she did not know I was one of the consultants on the videogame Watch Dogs 2).

As with both Dark Faiths, I didn’t know what this issue was going to look like until I read the first story that screamed “I’m what you’re looking for.” That story, in case you were wondering, always kicks off the project to set the tone. In this instance, that would be Sheree Renée Thomas’s “Aunt Dissy’s Policy Dream Book.”

Then there’s the 1-2 punch of Chesya Burke’s “Say, She Toy” and Kendra Fortmeyer’s “The Selkie Wives.” The former grabs you by the throat (throws you to the ground and talks about your momma) and the latter haunts your mind (its echoes even in your dreams).

I have loved Linda Addison’s work for years. She’s been instrumental in developing my appreciation for poetry. Her “Things That Earth No Longer Bears” and LH Moore’s “Vox” pair up nicely.

Lastly, there’s one of my dream list authors, Walter Mosley, and his story “Cut, Cut, Cut.” My favorite genre to read is crime fiction, so I was already a huge Walter Mosley fan. When I found out that he’d written a collection of short stories, I snatched it up immediately. Futureland: Nine Stories of an Imminent World had a huge impact on me in terms of me developing my voice as a writer, as well as showing me the possibilities of what SF could do. It’s one of those collections that I rarely hear anyone talk about. A series of nine interconnected tales about a dystopian future where rich technocrats rule and poverty is basically considered a crime. The world-building is dizzying and he piles idea on idea on idea while speaking to issues of race and class.

Diversity doesn’t just happen, nor do I set out to work on any project with diversity as the goal. Diversity done well isn’t just about the appearance of marginalized people, but our stories being positioned and told with equal complexity as the privileged. What I do is solicit and read widely to find the best stories I can. It’s the Apex way.

(And you’ll probably be feeling my fingerprints for a few months as I sent along a few stories from the slush pile I couldn’t quite let go of for Jason to choose from for future issues.)