This summer, I attended Gen Con, a large gaming convention that heavily features cosplay. It is also a central hub for writers to come and participate in panels and discuss their books with those who are interested via their highly regarded Writers’ Symposium. While Gen Con wasn’t the launching point of my journey as a writer, it certainly marked a noted step up in my professional development. I am a fourteen-year-old author. It was Maurice Broaddus who encouraged me to attend Gen Con. I met Mr. Broaddus during my eighth-grade year at the Oaks Academy, where I and a few other friends asked him to host a creative writing club. The club provided an outlet for us to express our artistic voices through writing. But the club ended too quickly, and I really wanted more. High school was fast approaching, and it was time to get serious. My mom often lectures me about how being an author will be difficult, and I don’t doubt her. The time to act was now. I asked Mr. Broaddus if he had any interning opportunities over the summer, and he said that he could probably figure something out. The rest is history. Gen Con was the last hoorah of my writing internship, a way for me to go out and test the waters. I wanted to find people who understood what it means to be an author, and people who I could trust to guide me on the path to success.

I’ll be honest. When Mr. Broaddus suggested that I should attend Gen Con, I was ambivalent. I didn’t know much about the convention, nor did I think it would be my thing. Boy, was I wrong!  I mean, the whole idea of going to a huge gaming-based convention made me nervous, and then, when he told me that multitudes of influential authors were attending, it scared me even more. The thought of being acquainted with people who had succeeded in the profession that I had only started made my stomach clench. Literally.

My first impression of Gen Con was that it is a place for the outcasts, for those who are different and special. A place for them to come and all be weird together. Walking through the doors of the Indianapolis Convention Center felt like I had entered a new, magical land filled with people wearing all different types of costumes. One of my favorites was a man in a giant scarecrow costume. It certainly made me feel like I was in a world other than our own. Another one of my favorites was seeing people walking around in elven costumes. I’ve always loved elven fantasy books, and the stories and the clothing. The dealer room was one of my favorite places to people watch. No one was bullied for being authentic. Good vibes existed all around. I felt like a “not real adult,” which, to me, are the best kind. “Not real adults,” such as Mr. Broaddus, [eds note: I love it when she calls me “Mr. Broaddus” and can’t stand when she refers to me as a “not real adult.”], are those who assume the responsibilities of being an adult, but still make time to have a daily dose of youthful fun.

Despite the large crowds, I felt safe the whole time. Everyone who I spoke with was friendly and unique and made me feel welcomed. While there, I sat in on a few panels and found them to be a great learning experience. Not only did they give me some useful insights on the different genres and pieces that constitute the writing puzzle, they were also super funny. I discovered that a lot of the authors are laid-back and not scary. They’re like regular people who talk about things that they love. While there is definitely a certain level of respect owed to them for how far they’ve come and how hard they’ve worked to get where they are, it’s still hard to not go all fan girl sometimes because they are pretty awesome.

The Writers’ Symposium green room was my favorite part of the whole experience. The place was like stepping through the doors of a magic wardrobe, a land filled with magical stories and magical people. I loved sitting back and listening to professionals discuss things they really truly cared about.

One important and crucial part of being a writer is learning how to network. Networking is essentially making friends in the industry and keeping those relationships strong. To be a part of a community of writers is to be a part of a family; being a part of a family means that you have to learn to coexist with everyone around you. It’s a place where you can find yourself and find where you belong in the world.

Alethea Kontis—She was such an inspiration, a true princess. She really showed me how to be absolutely, unapologetically myself.

Melanie Meadors—She was gentle and kind, while still being professional and confident. She knew what she was doing, and she wasn’t going to let anyone put her in a box just because she was considerate of others’ feelings. I really admire that.

Elizabeth Vaughn—She bought me dinner (which is always appreciated) and was encouraging and had a lot of great ideas to share. She made me feel secure.

Elizabeth Bear—Now where do I begin? The fact that she even took the time to have a conversation with me was incredible. The advice she provided, and our conversation about resilience, was truly inspiring and will stick with me for the rest of my writing career.

Jaym Gates—Meeting her was intimidating to say the least, but she is someone who I aspire to be like. I discovered that we shared the same opinions on a multitude of topics that I had been scared to discuss with most people. Hearing things that you have thought, having that “Really! Me, too!” moment is almost always the start of a great relationship. She knows that it is hard to be a woman in this career. She knows that it is hard, and you have to juggle all that life throws at you, and she offered good advice on how to do just that. She gave me hope for college and some idea of how to approach the whole situation, for which I will be eternally grateful.

Toiya Finley—She is a strong and powerful black woman who knows what she is doing. While it is difficult to be young, black, and a woman, seeing someone like you be successful is special and encouraging. She shared a great piece of advice I will remember for the rest of my life: “If you know what you want to do, why wait? Start now.”

Gen Con was not perfect, as some of the lessons I learned were not so nice. A male author assumed I was Mr. Broaddus’s daughter (something we get a lot), but he proceeded to ask Mr. Broaddus’s son if he had any interest in writing. When his son said no and laughed, someone said, “She’s pretty interested,” in reference to me. The author’s response was, “Oh, okay,” and he joined another conversation. I don’t like being ignored or overlooked. This minor setback didn’t discourage me, though. I know that people will look down on me because of who I am. This was not the first time, and will most certainly not be the last. It only made me realize how much nicer it will feel when I succeed. I know that the world will look at me and make assumptions, and I know that people will underestimate my power, but that will not discourage me. It will drive my successes. The world is not going to give me a leg up, so I have to make my own and I am not afraid.

Prior to Gen Con, I had two different images about what it means to be an author. Either you ended up like J.K. Rowling, or living in your mother’s basement. I thought you had to attend college for creative writing and nothing else. There was so much I didn’t know. I’ve had to learn to balance a love of writing and the fact that I still want to live my life as a teenager. At Gen Con, I felt as though I was having mature conversations with professionals about writing and its different styles and genres, but I could also gawk at insanely cool costumes and crack jokes with people in the green room. Gen Con provided confidence for me to pursue a career in writing, and I am eternally grateful.

Isabella Faidley is a freshman in high school and a writer. She lives in Indianapolis with one mom, one dad, one brother, one cat, three dogs, and six snakes. This marks her first publishing credit.

Isabella Faidley is a freshman in high school and a writer. She lives in Indianapolis with one mom, one dad, one brother, one cat, three dogs, and six snakes. This marks her first publishing credit. 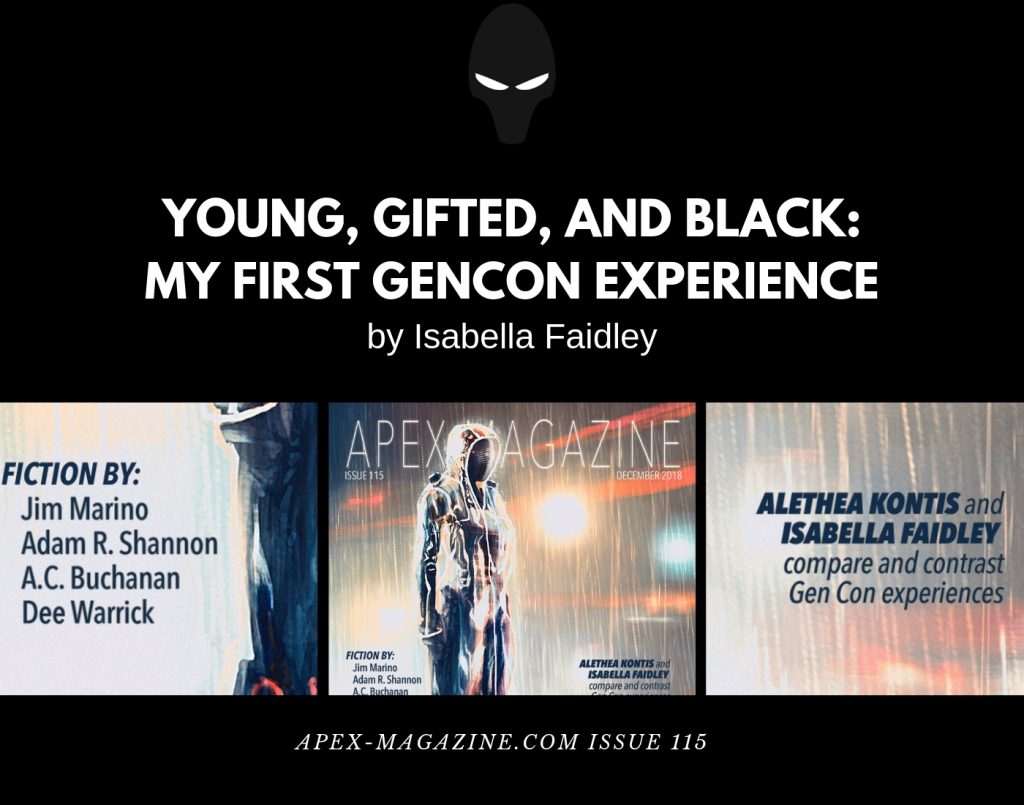