You in Your Headmeats5 min read

Home » Nonfiction » You in Your Headmeats

Maybe you’re up a bit later than normal, even though you know that nowadays a regular sleep cycle does wonders for you. But it’s only because you mixed yourself a very adult cocktail. The kind made entirely of liquors—like a Negroni—and it’s on a good amount of rocks, a drink for sipping, not gulping. There you are: sipping like a responsible adult, watching a bit of TV. You’re on your own since your partner has made a smarter decision than you. They do that. Often. It’s okay though, you can watch some stuff, the sorts of things only you enjoy. Can even skip through to the best parts because you’ve seen it before.

Let’s say you’re watching Sweetheart on fast-forward and skipping along thinking about why you enjoyed this movie so much. Sure, it’s a monster movie and you love those, but it’s the protagonist, a woman—a Black woman—that drives the narrative. Her skin color isn’t a factor in the story, though, but it is important for the viewer. It’s the sort of casting that should be seen as often as any other. It’s mostly a solo bid, her being a castaway on this island, alone. By the end of the movie, she’s different, she’s grown, become more of who she could be rather than the manipulated drifter who found herself on a party boat with not-quite friends. The character has dodged plenty of tropes along the way too. She’s not a kick-ass fighter ready for adversity, she’s not cocky or self-assured. She’s, well, normal. A baseline, regular person thrown into a mess, and she is well and truly over her head. (Still, the monster is very cool.)

Anyhow, you finish your cocktail, miraculously remember to move the laundry from washer-droid to dryer-bot, and haul yourself upstairs. You trade some banter with your significant other and crawl into bed just as they start making short work of long logs. There’s no sleeping until the sawing is done, so you decide to read a bit. Maybe you’ll go back to beta-reading that thriller your pal wrote or maybe you’ll catch up on some nonfiction that’s been piling up—you know: the news and such. The news, as you like to say, in the twenty-first century, is logic-defying horror fiction. If your best friend had written it, you wouldn’t think it plausible. It’s what makes the news both bizarrely compelling and disconcerting. The last article you read is Gerald L. Coleman’s, “The Death of Captain Kirk: Why the Illusory Singularity of the White Hero Must Die” in Apex Magazine because you stumbled upon it on the ol’ social media feed earlier in the day. And that’s it, lights out. Only … your brain likes to make a weird salad when you muck with the circadian rhythm. It mucks back and makes the sort of salad that’s all bitter greens and chicken bones, chunks of raw meat and nuts you don’t like. (There are fucking raisins, too.) The dreams aren’t often nightmares, no, you spent a significant amount of time in the physical world curbing the issues that fueled the heavy stuff, that dulled the sharp corners of anxiety that used to drive terrifying dreams.

Now, where you are is a movie theater, you’re sure, but it’s sloping nonsensically in both directions. You’re on stage and backstage, there’s a big screen, and the audience is full of tropes sitting socially distanced in every other seat. The screen flickers, the only light in the dark hall. It smells like popcorn and sugar, the floor is sticky and the rug is trampled flat and slick. It’s all too odd and you think, time to go, because you know this is a dream; you can tell by how off the whole affair manifests. It’s not exactly scary, just very weird. Then you bump into a carousel, which, if we’re being consistent about the theater being full of tropes, turns on, and damn if the tropes don’t rise up and try to keep you from leaving.

The girls-who-love-ponies are the first to get in your way. There’s a carousel and, natch, it has ponies on it. Behind them are their BBFs: Best Black Friends. A gaggle of women waggling fingers and shaking heads and exclaiming, gurl, repeatedly. The kick-ass-but-no-one-knows-it Asian girls square up with you, but their favored-older-sisters-who’re-definitely-getting-married pull them away one by one. The tough-as-nails nurses have their disapproving eyes on the whole affair in case someone needs medical attention. It is their unhappy lot in life, after all, to provide tough love and healing while destroying themselves through neglect or addiction. There’s more. A horde. The entire crowd has risen up, agitated by the carousel’s noise. There are women the color of coffee and chocolate, of fresh milk and caramel, with almond eyes and whipped cream hair and so many other foods. Sexy witches and sexy jungle princesses and butch-lady-jocks-who-are-definitely-lesbians and manic pixie girls and hot Goth chicks and science babes and fiery Latinas and …

You have to urinate.

There’s no sleeping through it. The clock tells you it has only been an hour since you went to sleep. It’s a groggy stumble to the bathroom and you realize this is your fault. Not all of it, no, but you carry some responsibility for these never-ending tropes. You’re an author. Make no mistake, it’s writers that codify these things, that cement them in the public consciousness by their prose. In books and articles and screenplays and stageplays, in ways both overt and subtle. You know your stupid brain absorbs things during the day and blends things at night, that it regurgitates whatever has caught its fancy, that you must be aware when it is leading you astray. The experiences are yours, the thoughts are yours, the words are yours.

It takes a while to get back to sleep because you’re trying to remember this dream, to make as much sense of it as possible. There is a fog of nonsense in front of you and behind you, it is an atmosphere that is penetrable and someday it will be clear, truly clear, and you will see people before anything else. But until then, you must be careful, not afraid, just have care and create with respect. Society is messy. Like sleep and family and— In the morning, you remember this dream, its sledgehammer tropes, and urgent weirdness. You know that you can play a part in reversing the whole of it. Play a small part, at least, in whatever you create next, wherever you go. 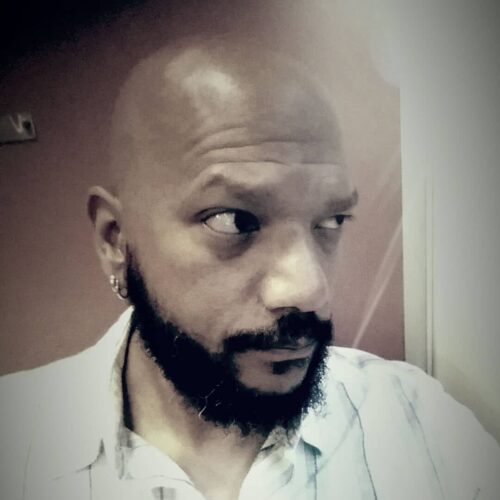 Errick Nunnally was born and raised in Boston, Massachusetts, and served one tour in the Marine Corps before deciding art school was a safer pursuit. He enjoys art, comics, and genre novels. A graphic designer, he has trained in Krav Maga and Muay Thai kickboxing. His work has appeared in several anthologies and is best described as “dark pulp” and can be found in Fiyah Magazine, Galaxy’s Edge, Lamplight, The Final Summons, Protectors 2, Nightlight Podcast, and the novels Lightning Wears a Red Cape, Blood for the Sun, and All the Dead Mean. Visit erricknunnally.us to learn more about his work. 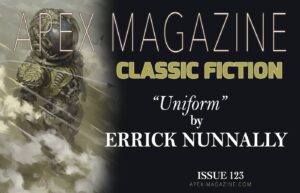 The phone rang, had been ringing; his family calling early. He relaxed and reached out along the electromagnetic connections in the air, pushing his will across the apartment’s network to open a connection directly into the OsNun CR permanently embedded in his skull. The conductive receiver, buried beneath the layers of carbon filaments and reinforced ceramics that replaced most of his brown skin, buzzed with every word.

Errick Nunnally was born and raised in Boston, Massachusetts, and served one tour in the Marine Corps before deciding art school was a safer pursuit. He enjoys art, comics, and genre novels. A graphic designer, he has trained in Krav Maga and Muay Thai kickboxing. His work has appeared in several anthologies and is best described as “dark pulp” and can be found in Fiyah Magazine, Galaxy’s Edge, Lamplight, The Final Summons, Protectors 2, Nightlight Podcast, and the novels Lightning Wears a Red Cape, Blood for the Sun, and All the Dead Mean. Visit erricknunnally.us to learn more about his work. 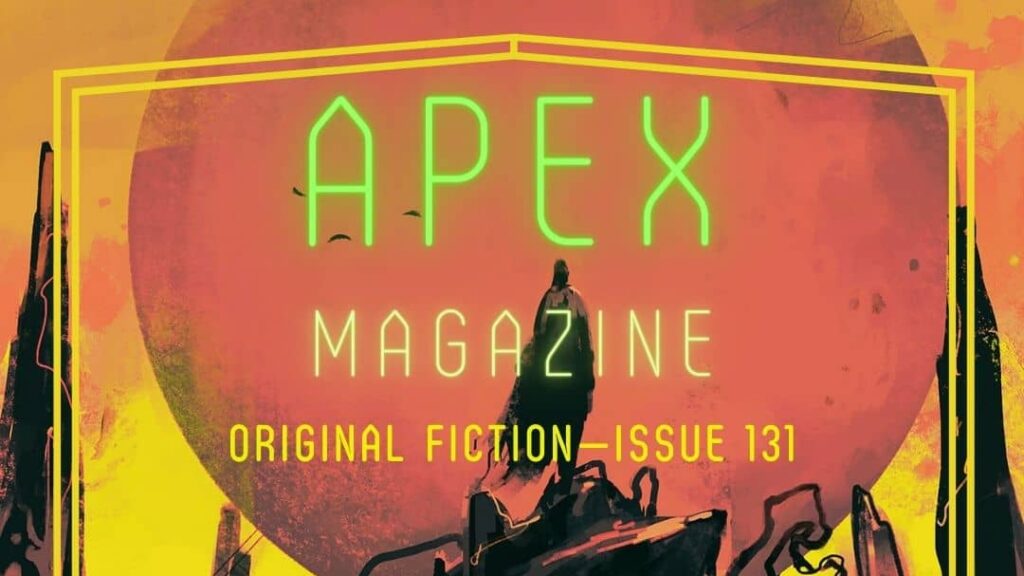