I wrote my debut novel, Junction, in the year of the birth of my second daughter, which was also the year I developed colon cancer.

I didn’t know it at the time. For about a year, all I knew was that I was always tired. My work, family, and writing were turning into the grind between one sleep and the next, and the only time I really felt alive was after a cup of coffee. Then it was only in the first hour after coffee. The first couple of minutes.

I started losing weight. My skin turned gray. I had increasingly frequent and severe “stomach bugs” that merged into regular pulses of pain and nausea as my large intestine clenched, trying to push its contents past the tumor. In the spring, I started having spells of cold so intense, my shivering became tachycardia. But I pushed through it. I forced myself to get out of bed and work until I could get back under the sheets, planning for the summer when I could finally have enough sleep.

My problems are right there in Junction, especially near the end, when both the story’s main character and I were struggling to survive. One might say that, through my writing, I was trying to understand my illness.

One might also say that, through my writing, I was participating in my illness. I was making it worse. I prioritized number of words typed over the quality of the writing and my quality of life. I only allowed myself to feel happy when I met a deadline. I spent my time with my family waiting for a chance to lock myself up with the computer again, high on caffeine and panic. Because what if I didn’t write enough?

The result wasn’t just bad writing, it was wrong writing. I had turned what should have been my creative outlet, my comfort, into another shrieking alarm on my to-do list. I kicked myself into waking up, taking care of my kids’ problems, teaching my students, and oh hell, now I have a thousand words of writing to do. Why can’t I write these thousand words? Get up, you stupid animal, stop lying there, wasting time and produce something! No, that wasn’t enough! Type faster, work harder, run, run, run. If I thought that all writers had to be tortured the way I was torturing myself, I’d never read a novel again. And during all this, my tumor was growing.

Eventually, I did talk to doctors. I went to the hospital. I had an ultrasound that found nothing, and I was sent home with a laxative. One laxative later, I was in the emergency room, and I got a second ultrasound, which found the tumor. They operated and removed the tumor! Complications set it. A week after one emergency, life-saving surgery, I needed another even more urgently. When they were prepping me for that second surgery, and the anesthesia was finally kicking in, my thoughts were, “At least my kids have already been born. At least Junction has been written. If I don’t wake up, I will still have left something worthwhile behind me.”

So, I did wake up. I was moved from Recovery to ICU and from ICU to a private room. I stood up, I walked. My wife and I talked. I watched kestrels fly outside my window. I drank some unpleasant protein shakes, then the best damn chicken broth I’d ever tasted, then baby food (which was fine with some salt). I read when I could. I looked at photos of my daughters and the pictures they’d drawn. I learned to use my colostomy bag. I tried to work a bit on Junction.

I tried often. I’d get out of bed to get my laptop. Roll over onto my right side, swing my legs over, get a good grip on the floor, sit up, get my various hoses untangled, stand, then wait for my guts to settle into the new position. Then I would drag my unruly IV stand over to my closet, where my backpack and the laptop were. I loved it. All of this moving around sure as hell beat the alternative.

But then I got back in bed with my laptop, opened the “Junction” file, and thought to myself, okay now, you stupid writing machine, churn out a thousand words right now or else! And the answer I got back was NO! The physical reaction was like having cancer again. I could not treat myself that way anymore.

For the first five or so years of my attempts to write professionally, I thought that success meant putting my foot down on the gas as hard and for as long as possible. After I got sick, I realized that my body isn’t a car. I’m not a perfect, idealized mind, piloting a machine. I’m an animal, and when I pushed myself so hard, I was abusing that animal. I needed to give the poor ape a break.

So, I ate food that I enjoyed. After eating through an IV for two weeks, I enjoyed everything. Man, that chicken broth was like a religious experience. The first time I went outside, the smell of soil blew me away. I went home, and my own bed was so much better than the one in the hospital. I went out to a movie with a friend and I didn’t collapse. I got to eat meat again, cheese, bread, then hot sauce, and, since last fall, leafy vegetables and nuts. I took walks. I enjoyed pretty scenery. I noted the color of the sunset, the way it felt to press my palm against a hot cup of tea. I wrote haikus. If it was after 9 p.m., I didn’t think about anything worrying. I scheduled reliable writing time on a repeating schedule. I tracked what I did after I did it, and celebrated small victories, looking for reasons to reward myself. I learned how to be kind to myself.

That decision would make sense even if I had to give up writing productivity in return for mental health, but it turned out I didn’t have to. After I started tracking myself and savoring soup and whatnot, my writing speed actually doubled (and I can prove it because I was tracking myself). The work I produced was also of much higher quality. All those haikus and sunsets and practicing being content gave me something to write about. I remembered what was important. That’s not because of my cancer; it’s because of my recovery.

I edited Junction over the process of that recovery. I did my chemotherapy during the big, drastic rewrites (remember how wrongly I had written that first draft?). My agent sent Junction to Flametree, right after I got home from my third surgery, the one where they hooked my intestines back up and got rid of the colostomy. About six months later, I got the news that Flametree had picked the book up, then I went in for a CAT scan check-up and freaked the hell out (“He’s totally clean!” said the radiologist, “and next time get a prescription for sedatives before his scan, please.”) Another six months passed, and when I turned in the last proofs, I was still trying to dismantle my crippling fear of drinking-coffee-and-still-feeling-sleepy. Now, the proofs are in, the hardcovers are in the mail, and I’m waiting to hear from my publicist (I have a publicist!). 2019 will be first year in six years where nobody in my family underwent major surgery. Um. Knock on wood.

So, the book that’s going to get published isn’t about a hero driving himself to the finish line before collapsing. That was the first draft, and it was wrong. As I healed and revised Junction, I saw another theme emerging: survival is hard, but it’s also beautiful. As living things, we all managed to be born. Every day, we manage to stay alive. I’ve seen the alternative to living, and it’s made me more appreciative. Writing isn’t my desperate bid for fame anymore. It isn’t the punishment I must absorb before I’m worthy of immortality. Writing is good for me. Writing is fun. Junction is fun, too. It’s got monsters eating people. I hope you enjoy it. 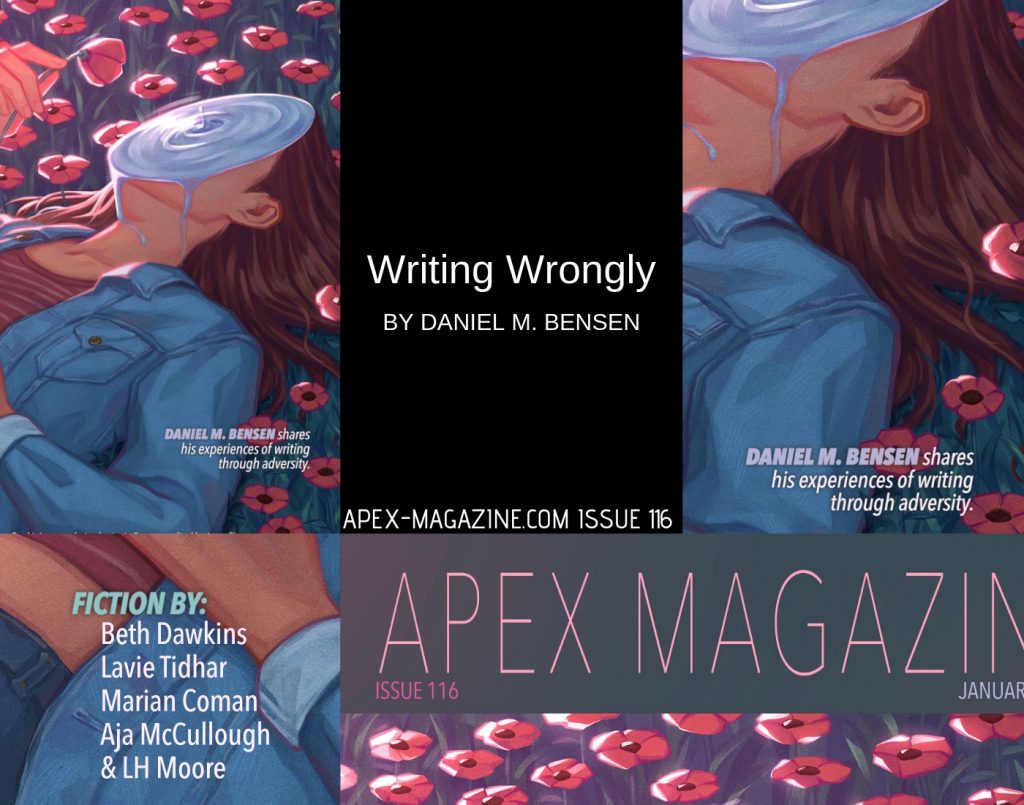