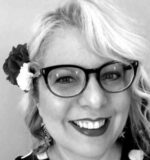 The world’s history is riddled with inaccuracies, partially because it’s impossible to read or decipher what actually happened, or when it happened. Using a combination of science and intuition, we can guess what may have occurred in history, but a lot of the time we’re not entirely sure. Additionally, since it is almost impossible to find written records that haven’t been penned with a slant or bias, it can make it difficult to find one cohesive version of a historical time line that doesn’t skip a significant (e.g. fifty or more) number of years.

Although our own world is fraught with many inconsistencies, when we immerse ourselves in an alternate world through fiction or film, we expect everything to tie together in a cohesive whole because, otherwise, we would not ‘believe’ the story. In other words, when the setting is broken, our suspension of disbelief suffers and we no longer want to ‘participate’ in that story.

When building worlds for the dark science fiction genre, I feel that the world must achieve two goals. Firstly, it needs to achieve the goal of every science fiction world: the technology (or the biology) has to be believable ‘enough’ to hold that suspension of disbelief. Secondly, the setting needs to have elements that will attribute to a mood of horror. Aliens, for example, meet both criteria. The world, prior to human settlement, was settled by aliens. When humans tried to settle on that world, there was a conflict that resulted in destruction. That violence was the catalyst for all the mood-building elements in that world. Broken lighting and wires, dead bodies, alien slime are all pieces of the world that lend themselves to dark science fiction.

A good catalyst can change any science fiction setting from its original intention to something darker and more ominous. That catalyst can be masked in the form of a protagonist or antagonist, an event like war, famine or disease, or it can also appear as a misunderstanding. Television series like Stargate: SG1 or Farscape can be excellent to study because, while not every episode is dark, you’ll often see the writers choose a particular element to turn that world upside down and reveal its darker, more dangerous side.

Of course, another element of world building that can help establish a darker mood is the way the story is recanted. Imagine if Dune were narrated by Baron Harkonnen, or if War of the Worlds had been told from the alien’s point-of-view. While both settings are pretty dark to begin with, the antagonist’s perspective can immerse a reader into the darkest corners of the universe because they are intimately familiar with them.

Whether you enjoy reading, writing or watching dark science fiction, the keys to world building in the genre are sandwiched between believability and causality. First, build your science fiction setting as you would any other world for any other genre. Next, you’ll want to decide on a catalyst that will fundamentally change that world in an irreparable way. Finally, you’ll need to determine not only how that change affects your plot, but also how it affects your characters. By combining these three things, you’ll both ‘help’ maintain that suspension of disbelief, and eliminate any glaring inaccuracies that might jar the reader (or the viewer) and teleport them out of your world.

© Monica Valentinelli
← Game Fiction: Why It Works (and Why It Doesn't) 2012: The Good, the Bad, and the Apocalyptic →