It’s fantastical, illogical, ambitious, somewhat irreal, even unsettling—you may have read the literary strange in all its jarring, but just didn’t know it by name as ‘slipstream’. I first met slipstream fiction through Andrew Hook. Not everybody has read this European author as compulsively as I have. Hook appears to prefer a quiet life, lurking under the radar—his writing is anything but.

One of Hook’s collections, Frequencies of Existence, shows you the world through a quirky lens. You’re enamoured by writing in its beauty, strangeness, and horror. It’s surreal, even frightful to contemplate, yet—true to the author’s name—hooking. Nothing is what it seems. In a review of the collection, I wrote:

‘For lovers of metafiction, poetic text, intellectual narrative and elusive characters who linger to haunt you. The thrill you get reading Andrew Hook’s weird collection is out of this world. It’s a pastiche of the literary strange.’

‘Slipstream’ is a term believed to have originated from American author Bruce Sterling in 1989 to denote obscure stories that are neither mainstream nor genre science fiction (SF). Such stories show a particular contempt of the implicit canon and embedded protocols that SF fandom might expect, but embrace the refreshing snobbery in genre deviants like Kurt Vonnegut Jr and his deeply sardonic masterpiece Slaugherhouse 5.

Understanding Vonnegut’s unique flavour in his gaze of the world, Salman Rushdie wrote in an article in The New Yorker:

‘To read Vonnegut is to know that he was repeatedly drawn to the investigation of free will, of what it might be and how it might or might not function, and that he came at the subject from many different angles. Many of his ruminations were presented in the form of works by his fictional alter ego, Kilgore Trout.’

In a definition of slipstream fiction, The Best Sci-Fi Books deems it ‘an ill-defined subgenre that usually boils down to being some combination of literary, fantastical, illogical, surreal, and jarring’. The site lists, under the slipstream umbrella, titles full of dissonance— ambitious literature poised between literary, dreamspace, even the supernatural.

Herein we meet Jorge Luis Borges’ puzzling yet philosophical collection, The Aleph and Other Stories (1949), with its dreams, labyrinths, elusive identities, and uncanny insight into fully-realised human characters.

There’s China Miéville’s Perdido Street Station that blends genres and subgenres of speculative fiction, including fantasy, modern, and contemporary fiction, and cyberpunk, in a city nightscape harbouring humans and re-mades, and a scientist fixated with crisis theory.

Miéville’s The City & the City also crosses genre to blend crime fiction, fantasy, and science fiction in a slipstream offering that the publisher Pan Macmillan describes in its selling blurb as ‘a murder mystery taken to dazzling metaphysical and artistic heights’.

Haruki Murakami is another author with a strong offering of slipstream fiction in his repertoire of the bizarre. The Wind-Up Bird Chronicle is as unreal and mesmeric as you might expect, in a Tokyo-based fiction where protagonist Toru Okada loses both his wife and her cat—enfolding a ‘netherworld beneath the city’s placid surface’.

Like Hook, each of these ambitious authors offer text that is elusive yet gripping, abstract yet recognizable in familiar yet peculiar worlds. Explaining where his mind goes when he writes, Hook said:

‘It’s life as I see it. I appreciate I have quite a weird take on the world, that we are living what are considered to be quite normal lives (ignoring Covid) and yet, if you take away the restraints and conditions which society imposes on us for purposes of conformity and sanity, then actually we’re in absolute chaos on a ball of rock spinning within an infinite universe, surrounded by other animals and plant life which we impose understanding on but in reality are just as fluid and magical as we are.

So reality is fantasy in any event.’

Entranced with Hook’s mind, perhaps in some form of sapiosexuality, it was inevitable that I would broach him to collaborate on writing a short story.

‘A collaboration sounds like fun and something I’d definitely be interested in,’ he surprised me with his response. ‘Do you have any specific ideas?’

‘When I’ve done it before,’ he said, ‘it was a case of taking turns with the other writer, adding 500-750 words or so and then sending it back and forth until the story was finished.’

Now that was a plan.

‘Looking forward to seeing the start of the collaboration,’ he said, leaving me in a mixture of trepidation and ecstasy. What the hell were we going to write?

But we found words in slipstream. Back and forth, we expanded our fiction. He had lived in Melbourne, Australia, before and was excited to set this new story in a city that carried for him fond memories.

What struck me about Hook was how he sent back polished drafts. His email would be something like: ‘… been busy … found a minute … hope you like it …’ And it would be a perfect write. Where I fiddled and fuddled, moved things around, edited, edited … Hook took a minute on his computer, skimmed through the story so far, then whizzed out polish straight from his head.

What started off as ‘An Unnamed Story’ became ‘Messier 94’:

The driver pulled off, abandoning me to a hammer of music that was spiked with wailing. I looked at my bearing: 200 metres from Flinders Street towards Spring Street. Behind me, a wire fence – if you climbed it, you’d plummet to the rail tracks where slow trains pulled into the station’s tunnel and to the platforms. Ahead, between me and a closed Indian restaurant, was an abandoned tram stop. I couldn’t see the nightclub but could certainly see its sound. Blobs of strobe light and patterns of zigs and zags, then random blots and bursts to a beat on the other side. It was beginning to pour. By the time I made up my mind, crossed the road and walked around the Indian restaurant, the skies were gushing down.

The bouncers, sour sorts with serious muscle guns on their arms, looked right through me. I slipped past them into a doorway. Nine windy steps down from the hammer of beats on the street, I found myself in a basement of inside music that wasn’t so loud. It was like the notes and mismelodies had escaped from themselves and the basement, and spilled into the streets. What remained was a husk, the memory of a song. A haze of peals, a prowl of wails. A sound of something you didn’t know but you wished it was deep. A whistle of broken lips, a tap of bones. Keening, wailing. On occasion, a drum. Clapping, too, vibrating to a shuffle groove.

Forms and images bobbed on the dancefloor. Ellipses, parabolas, three-dimensional polyhedrons. Flat faces, egg faces, cones and cylinders. People with shut eyes, moving bodies. Faces fading, assembling. They turned from me when I approached them. Reassembling. I floated to lost music in a sense of beauty and terror. Weightlessness. A whiff of smoke, metal, blood. The basement was packed yet unpacked. I was surrounded yet alone. Dry from the rain but alone. I was here and now. I was absent.

Suddenly he grabbed my elbow. He was there, dancing with me. He was here, he was there – his fresh young face, eyes lit with mischief. We were tight. We were tense. We were fluid. Assembling, reassembling. She was back, she was forth – dark sweet notes of her perfume, blue-black hair in a fringe across her face. They were handsome. They were dangerous. I was playing a game, and it was deadly.

The music reverberated. Tremors in my soles. We cut shapes. Strobed. I went in to their out and vice versa. The fluidity of existence. A dance to the beginning of time.

Our fiction exposes the blurring nature of slipstream fiction that is elusive, abstract, estranged, yet familiar. It is a radical take on fiction that borrows elements of, but is not traditional genre fiction—according to the Encyclopedia of Science Fiction’s definition of slipstream SF. If you don’t suppose you’ve read slipstream fiction but are familiar with Iain Banks’ The Bridge or David Mitchell’s Cloud Atlas, you might need to have another think. 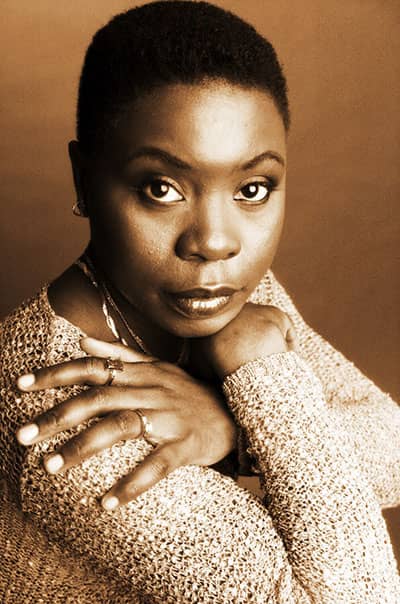 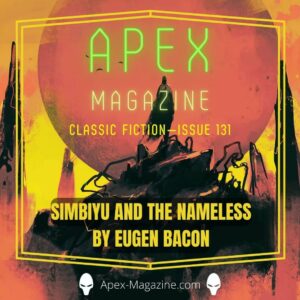 The river is changing. You know this without knowing how, or why. Tatu doesn’t notice. She’s poking in the mud, digging for crabs. A black octopus climbs from the water’s surface. A mist that whispers a name. You understand it. You’re one with it, bopping your anticipation. 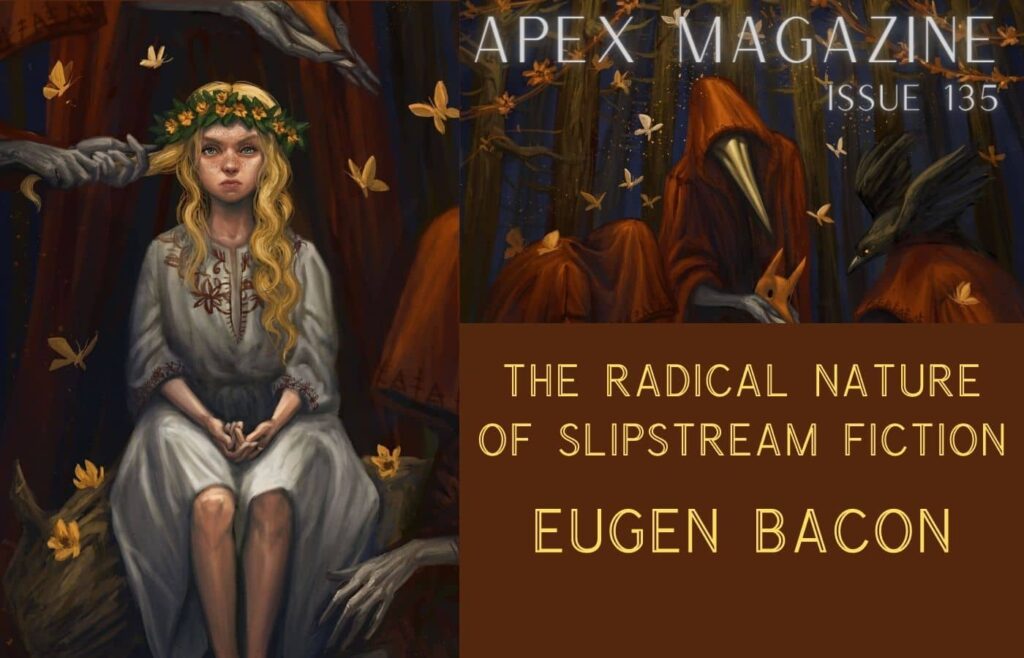