The Fuzzy Bunny Squad is Standing By….6 min read

Home » Nonfiction » The Fuzzy Bunny Squad is Standing By….

Picture this: you’re reading a novel, or a short story, or perhaps watching a movie or television show; you’re being entertained, you’re caught-up in the story, enjoying the heck out of everything, and then—

—something so unbelievably, incredibly, and mind-numbingly STUPID happens that whatever spell has been cast by the story/novel/film/show is instantly broken, and you spend several moments trying to figure out why this moment of radiant brainlessness has elbowed its way into something that was, up until this point, doing a damn fine job at helping you suspend your disbelief; in fact, you spend so much time meditating on this conundrum that you miss whatever happens next, or are so flummoxed by it that there is absolutely no way in hell that you can enjoy the rest.

What is a person to do?

The obvious answer is to seek out those books, stories, movies, and shows that have some integrity and acumen behind them, and whose creators display an obvious respect for your intelligence. (And while you’re at it, discover that cure for cancer we’re all waiting for, will you?)

Unfortunately, most people have neither the time nor the inclination to seek out those works that adhere to the above guidelines (they are out there, but keep in mind as we go along, everyone is entitled to the occasional mis-step; this statement will be made clearer shortly).

So the answer to the question What is a person to do? is actually very simple. What follows is my personal solution:

Think about them for a moment: you’ve got these bunnies; they’re all warm and plump and fuzzy; you can hug them and squeeze and call them “Norbert”; they’ve got their cute bunny noses and adorable bunny whiskers and those loveable floppy ears; you can hold them in your arms and pet them and—just like Spock with a Tribble—all your cares and concerns just…fade…away…under…the…weight…of…all…that…cuteness.

For the record, I’m not suggesting you go out and purchase an actual fuzzy bunny; they tend to poop and copulate a lot, and you don’t need any more frustrations; I’m talking about metaphorical fuzzy bunnies, the type you keep running free in the Watership Down field in the back of your mind, all ready to be called upon when needed.

But what use are these fuzzy bunnies if you cannot properly identify a Fuzzy Bunny Moment?

Lucky for you I have no life and few friends and am terrible lonely and so have spent a great deal of time considering this problem in order to give my existence the illusion of meaning.

Let’s start with the supreme Fuzzy Bunny moment from the film Aliens. I like this movie, but had it not been for the Fuzzy Bunnies, the ending would have ruined it for me.

You have to know the moment I’m talking about. Sigourney Weaver has bitch-slapped the Queen Mother Alien down into this airlock chamber. The Queen is scrabbling to get to Sigourney. There’s no time to close the roof, so Sigourney—in an act that defies not only all logic but at least three separate laws of basic Physics—hits the “jettison” button, the doors open, and the Queen is sucked into space.

But what of Sigourney? How does she prevent herself from being pulled into the death of space’s vacuum with the Queen?

With one arm—count it, one—she holds onto a single rung of a ladder. Forget that the sudden decompression is sucking pieces of equipment that weigh several tons more than she all the hell over the deck above, Ripley somehow manages through a feat of god-like strength to hold onto the rung for several seconds, all the while defying the power of the vacuum to reach out with her free arm (which should have been wrenched at the very least out of its socket, if not ripped off entirely) and hit the button to close the door, and the day is saved.

You could do several things at this point while watching the movie: laugh; shake your head; run, screaming, for a copy of Ernest Scared Stupid because you want a film that at least follows its own internal logic; or you could do what I did: think “Fuzzy Bunnies”.

…all warm and cute and plump with great floppy ears and cute widdle noses…and the moment…fades …away…and soon Ripley is back up on deck with Lance Henriksen and the little girl, and you’ve saved yourself some profound frustration, having discovered the secret to putting your brains on hold long enough to get past the idiocy and enjoy the rest of the movie.

Try this the next time you encounter a moment of radiant brainlessness in something you’re reading or watching. Just look at it, think or say “Fuzzy Bunnies”, picture the adorable little things, and soon the sun is shining and the birds are singing and all is for the best in this best of all possible worlds.

Or you could just drink constantly and be so fractured eighty-five percent of the time that you just don’t care how stupid something gets.

(I was going to use the last James Bond film Die Another Day for my Fuzzy Bunny movie example, but—despite one of the best first hours of any Bond film since Sean Connery left—the second half of this movie has so many moments of glittering idiocy that the Fuzzy Bunnies can’t copulate quick enough to create enough of themselves to save it.)

Sometimes, though, Fuzzy Bunny Moments occur not because of laziness or stupidity on the parts of the creators, but because of simple oversight.

Consider Stephen King’s novel, The Tommyknockers. Around the mid-point of the book, everyone in the town loses their teeth due to exposure to the radioactivity. Fifty pages later, they’ve all got their teeth back.

How did this happen?

The Fuzzy Bunnies brought them back.

Consider the second page of Dan Simmons’s Joe Kurtz novel, Hard Freeze; Kurtz walks into a restaurant and orders a hot dog, onion rings, and a black coffee. He suspects that he’s being followed. He pays for his order, takes his tray to a table, and proceeds to eat his hot dog, his onion rings, and, on page 3, sips his Coke. Has Simmons slipped in a bit of magic realism here? Did the coffee somehow metamorphose into a Coke while Kurtz was busy watching his soon-to-be attackers follow him in? Perhaps the person behind the counter wasn’t listening and screwed up the order.

Or, perhaps the Fuzzy Bunnies decided that Kurtz didn’t need any hot liquid in his tummy and so switched his drinks while he was busy casing the joint.

I am accusing neither King nor Simmons of stupidity, laziness, or sloppiness; but as I said near the start, every once in a while, everyone makes a mis-step. The above were mistakes that—had the authors not caught them—should have been caught by proofreaders. But they weren’t, and so we, as readers, have to call in the Fuzzy Bunny Squad.

I myself recently discovered a Fuzzy Bunny moment in one of my own stories; at one point in my novella “Tessellations”, the body of the main characters’ mother is discovered in two different places simultaneously. I could not believe that I’d made such a bone-headed gaffe, and quickly fixed it before its appearance in the Graveyard People collection; but those of you who have Trick or Treat: A Collection of Halloween Novellas from Cemetery Dance Publications, have the version with the Fuzzy Bunny moment in it. Go re-read it, you’ll see.

Sometimes, you just make a mistake. And that’s all right, providing that it’s just once in a while; but I’ve found, the more I read (specifically in the field of horror), and the more I see films (see previous parenthetical pause), the more and more I have to call on the Fuzzy Bunny Squad in order to justify the time I’ll never get back from reading certain books or watching certain movies, and they’re getting fairly irked at my pestering them so damned much. They have, in fact, given me notice and are looking for new employers.

So consider this whole column a very long pitch for their new home.

The Fuzzy Bunny Squad is waiting to serve you—providing you’re the type who won’t call on their services ten or fifteen times during every horror book or film. They’re cute. They’re fluffy. They have great floppy ears. And they’re guaranteed to take your mind off those all-too-frequent moments in horror when intelligence, characterization, internal logic, and respect for your brainpower are all thrown out the window in favor of a good shock or gross-out or just to make something more—oooooh—spooky.

Operators are standing by. 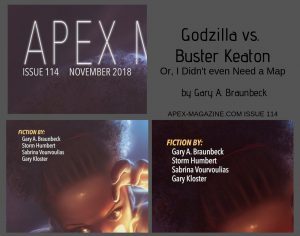 Godzilla vs Buster Keaton, Or: I Didn’t Even Need a Map

The little girl reached up and tugged on her mother’s sleeve. “Mommy. That man’s here again!”

First Intermission: The Day the Movies Came Knocking at My Door or “I’m Ready for My Close–up, Mr. DeMille!”

At some point in their careers, most writers indulge, however briefly, in the fantasy of selling one of their stories or novels to the movies or television. Nothing wrong with that. If you sell an option for a year, you get some money from that; if you sell the film rights outright, you get a whole lot more money. My friend Brian Keene makes no bones about this subject; he readily admits that selling the film rights to The Rising was what enabled him to quit his job(s) and become a full–time writer who didn’t have to worry about where