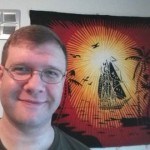 Ozgur K. Sahin is an independent author, editor, and life coach local to Minneapolis, MN. His published works include the first book in his Brethren of the Spanish Main series of historical pirate novels titled The Wrath of Brotherhood, as well as his weekly column, “Elitism For All,” in Calamities Press e–magazine. With a background ranging from astrophysics, developmental and attachment psychology, consciousness studies, history, and fantasy, his writing focus is on discovery in all its forms. His emphasis on self–discovery and exploration drives both his writing and his life coaching practice. Ozgur regularly attends fan conventions as an author and panelist, mostly in the Minneapolis area.

As an author of historical fiction, there are several debates about what to do and what not to do as an author that I don’t hear as much in regard to other genres. “Realism” has more rigid boundaries for many people, sensitive topics like racism, sexism, religion, and politics cause even more friction through the author’s treatment of them, and everyone has their own ideas about how much research serves a story versus how much it gets in the way. In discussion forums and at conventions, variations on these same topics rear their heads afresh anytime new people get involved in the dialogue. Of course, as an author, the job is to tell a good story, not to make everyone happy, but it is important to take an approach to all these issues that won’t alienate the bulk of one’s audience, and with this genre in particular, that can require a delicate balance.

My own experience with most things that require a delicate balance is to take a unified approach, out of which balance naturally grows, rather than trying to do the arithmetic with the opposite sides of some cosmic scale. You can’t balance a bubble by slicing it up and matching the pieces together — you simply blow one the right way and it is balanced. This kind of balance includes the quality of harmony, in a way that the economics of conflict balance cannot account for. It is therefore hard to define such an approach to writing and how it balances these factors, but I will do my best to describe a possible one (namely the one I attempt to employ).

What makes a story stand out to me as something I want to write tends to be plot–related more than character related, and the major points (turning points, climaxes, and other major sequences) occur to me as somewhat invariant fixtures, like the skeleton of the thing. I get a loose idea of how to get from each of these points to the next point, and all of this drives the initial research I do. Many people think you have to become an “expert” on the time and place you are writing about in historical fiction, but anyone doing historical research finds that this process can go on indefinitely. You can zoom in on any area and any time period, and there is practically an infinite number of accounts, angles, objects, and events to focus on, and interesting facts and stories to learn. “Becoming an expert” is a less useful goal in itself than the ability to discern exactly what level of historical detail is relevant and helpful to your story. I try to zoom in on the level of detail necessary for the basic story I’m writing and no further (unless I just get pulled in, because research is fun). As with a microscope, you need to bring certain things into focus, and this magnification will make other realities blurry or invisible — and these are the spaces where I get to play.

Historical fiction is a story first and history second. The history needs to always be in the service of the story, not vice versa, and focusing that lens still further on the blurry and invisible areas of historical detail without a story–related reason is simply a reprioritization of those qualities. At some point, historical detail will contradict the fiction, and it is the responsibility of the author to keep these two elements not only in balance, but in harmony.

With each character, this research must be done. With each event, it needs to be done. With each territory or statement of reality, it needs to be done. Personally, I do much of it as I go, because I don’t know ahead of time how I will get the characters and the plot from one point to the next. I know who the characters are and how they tend to behave, I know what their agendas are, and I know what is happening with the setting. After that, it is as if I hit the “go” button in my head and try to see what possible and realistic (which aren’t always the same as “logical”) ways things might progress. Sometimes I hit stumbling blocks in this progression when there is a conflict between story and history or when one of those conflicts with other aspects of itself, so I explore a new and different path, and I don’t know what research needs to be done until I see the level of detail required by what I have written on the page, but the key is that there needs to always be a reason for things to happen the way they do.

For myself, I feel that it is helpful to view the research I do into how people inherently function as another responsibility. I feel that if I understand history but don’t understand people very well, how much am I really serving the story? I have done a mountain of independent research on how consciousness develops and how the human mind works on conscious and unconscious levels before I even conceived of my story, but so must any author use their own interests to enrich rather than constrain their work. In my case, I find that understanding the human condition to a higher degree helps me to reasonably plot out how a character would — or could — act in any situation.

I never found it satisfying to see two–dimensional motives or contrived mechanics in stories. The explanation of “he’s insane” or “she’s evil” for so much villainy in popular fantasy novels, with no further exploration into what that means, how that works, or how it leads from cause to effect, turned me off to the genre almost entirely for several years. Conversely, the motive of “this is how these characters are, this is how they were raised, and this is what they believe,” put forth in some static or automated form without the characters ever changing, growing, or even questioning those dynamics is something I found equally infuriating, not because it was unrealistic, but because it was simply boring. I feel that unexplored motives are a disservice to the realism (even if the entire setting is fictional, as in some other genres), and unconscious or automated motives — I like to call these auto–motive — are a disservice to the story (at least in main characters). At any rate, both are highly unsatisfying to me personally, so I try to keep characters interesting, dynamic, and yet internally consistent. Switching to the perspectives of different characters from scene to scene can help draw this out for the reader, but isn’t strictly necessary. It can be a useful exercise for the author to better understand a character, even if it is never included in the story.

I find that not only should the characters function in this manner, but the setting must also include a measure of that harmony. In any given setting, there should be grand events that the characters are more or less powerless to hinder or help, large events that may be influenced in subtle ways by the characters, more moderate events that can be somewhat strongly influenced by the characters under the right circumstances, and a plethora of small realities for the characters to routinely interact with. My brother once told me that a friend of his, who tends to read quite a bit of science fiction and fantasy, would often be asked, “What is that book about?” He would look up from his book and say, “Saving the world.” Because invariably it was. There was very little differentiation between realities with respect to what the characters could or could not realistically influence, and as much as this can be fun in stories sometimes, it can be such a fixture in some genres as to be entirely predictable. This is less of a worry in historical fiction due to the obvious conflicts with accuracy that would arise, but it is still something for authors to keep in mind within the confines of their work.

Lastly, I want to address the issues of dialect, diction, emphasis, and overall writing style. Again, historical fiction is a story first, history second. All of the above qualities are more difficult for authors to distance themselves from objectively because they relate much more to the cognition, perspective, perception, and long–term language habits of the authors themselves. In short, it is much more difficult to become an “expert” on these to the point where authors can not only convincingly duplicate them, but do so without making the story difficult to tell. I think nearly every reader has had occasion to read dialect that they had no doubt was absolutely accurate, but nevertheless rendered their reading experience interminable, plodding, and joyless.

While the efforts involved in incorporating the language and style of the setting are laudable, I think that what often serves stories best is the impressionistic approach — giving enough detail to give the impression of the appropriate vernacular without making the story more difficult overall to read. Examples of this may include anything from attempting to eliminate anachronistic idioms (e.g. the Napoleonic phrase “out of touch” should not be used in a mid–seventeenth century pirate novel) to making one or two simple but consistent changes to a character’s speech (e.g. replacing the “th” sounds — found in English but in almost no other languages — with other sounds).

Remember, as an author, you are writing the story you want to write. Try to make sure it is one that can resonate with others (if you intend for others to read it), and try to make it consistent, plausible, and interesting. Research, diction, character, motive, setting… these are your tools. Remember that settings and characters exist interdependently rather than independently (divorced from all influences) or co–dependently (with one exclusively revolving around the other). Treat characters like whole people with agendas all their own, regardless of the plot, and you will find fodder for endless enriching subplots to dress the skeleton of your main plot in. Acknowledge that there is usually more than one sensible direction for things to go at any given point, and you need never contrive an implausible path to carry your story. Create a competent harmony (rather than mere balance) between realism and story, and you will find a loyal readership.

© Ozgur K. Sahin
← Fandom Activism for Change in Visual Entertainment Media: We Have the Power Fandom: Not Just Funny Business →