There’s a good chance you’ve never heard of polyamory or you don’t know what an OT3 is (one true throuple or one true triad, an adaption of the term “One True Pairing,” usually shortened to OTP). One can’t possibly provide a comprehensive rundown of polyamory without derailing this article, but in a nutshell, polyamory is the practice of non-traditionally-monogamous love. If there’s anything a budding (or grizzled veteran) writer of the fantastic needs, it’s a drive to seek out and learn from the non-traditional.

Polyamory isn’t a new dating trend. It’s an ancient practice, but again, whole articles and anthropology theses have been written about that, too. Polyamorous romances have become a pretty significant trend in both the fan fiction world and the traditional publishing world with MMF (male-male-female), MMM (male-male-male), and MFM (male-female-male) triads cropping up all over Amazon.

Triads: how do they work?

If reading the first section has you nodding along knowingly and made you impatient for the run-down on my info about this, then you’re in the right place! If you’re confused by the terminology and things I’ve mentioned so far, don’t worry. The internet is full of great resources! Morethantwo.com is a great example, a famous reference source for polyamory info. The site Autostraddle and sex advice columns across the internet also regularly talk about polyamory.

Okay, now that you have characters in mind and their potential relationships revved up, let’s jump back to that bit about OT3s. It’s a good bet that everyone has heard of love triangles—that other romance series, Twilight, featured a love triangle that became immensely famous. However, while a love triangle can resolve into a triad or throuple, they’re not the same thing.

People are probably familiar with the aphorism, “Two’s company, but three’s a crowd.” This is not the case for a triad. In the same way that a group of friends might comprise a pair of people or a trio, romance can also blossom this way. Perhaps a character might fall in love with an existing couple or might have separate crushes on each person in that couple.  Remember, like more common romance storylines, a triad’s love story can also be a subplot in a sci-fi or fantasy story (horror, too, if you’re looking for more bodies to run screaming). In this case, three people might develop a simultaneous attraction to each other, there might be some kind of rivals-to-lovers thing going on, or any number of wonderful tropes that already exist in media—but with the interesting difference that you don’t have to choose between two (or more) romantic rivals!

The “why choose” romance is another up-and-coming subgenre, but for the sake of brevity, let’s only talk about triads. How do they work?

One of the key requirements is extensive communication (which makes for more well-rounded characters). That means things like talking about feelings, even the ugly ones and the uncomfortable ones. It also means learning to be comfortable with those feelings and resolving them. That can be tricky in real life, but as an author, this should have you licking your lips with excitement. After all, who doesn’t love making their characters deal with some kind of misunderstanding or having to repair the consequences of their own folly? Instead of having one lover to convince or sway back into their life, the protagonist (or protagonists) may now have two people’s hearts to win—or two people might end up ganging up on the third, one person may split off … there’s an infinite variety of options for conflict. Triads can also involve a platonic relationship between two characters; romantic and allosexual attraction and love are not the only ways for characters to be strongly attracted to each other. (But again, that could be another article on its own!)

The spicy, yet mundane stuff

Of course, I don’t want to suggest that triad or throuple relationships are either an endless sex party or a constantly-brewing storm of conflict. That’s not the case for most monogamous couples—and when it is, something has gone wrong. Polyamory, like monogamy, has to be built on a foundation of friendship, understanding, and acceptance of each person’s struggles. This makes it a rich, juicy topic and an alternative to love triangles, and arguably, a healthier and happier one.

The best thing about being in a triad in real life is also applicable to the situation for fictional characters—not having to choose between two wonderful people, who have different strengths and personalities. If one is lucky, these people can even be stable life companions. An extra pair of hands around the house is certainly helpful for those who choose to have children—or even without children. However, the fundamental equality of each partner in the relationship is very important. Otherwise, it can lead to feelings of exploitation, exhaustion, and conflict.

In the same way that monogamous love is not merely a stable state, but a constantly growing garden to weed and water, a triad also requires very regular maintenance. Having characters deal with this can be a great source of conflict or a way to relieve tension. Sex is always a fun option, but there’s so much more to relationships than sex.

Who can write a triad or throuple?

Triads may not be a great choice for first-time writers, but don’t let that scare you off. Any writer should at least consider it as an option—whether for a big series or in a short story. Short stories are always a great laboratory for experimentation. As someone who is in a triad myself and preparing to marry both of my partners (though, sadly, not with legal recognition), I hope to see more people making room for the unusual and unconventional. We’re certainly not fictional, or just freaks, and we’re carving out a place in fiction. 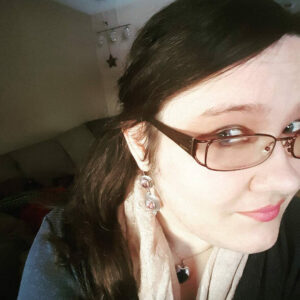 Michelle Browne is a sci fi/fantasy writer and editor. She lives in Lethbridge, AB with her partners-in-crime and their cats. Her days revolve around freelance editing, knitting, jewelry, and learning too much. She is currently working on other people’s manuscripts, the next books in her series, and drinking as much tea as humanly possible.

Michelle Browne is a sci fi/fantasy writer and editor. She lives in Lethbridge, AB with her partners-in-crime and their cats. Her days revolve around freelance editing, knitting, jewelry, and learning too much. She is currently working on other people’s manuscripts, the next books in her series, and drinking as much tea as humanly possible. 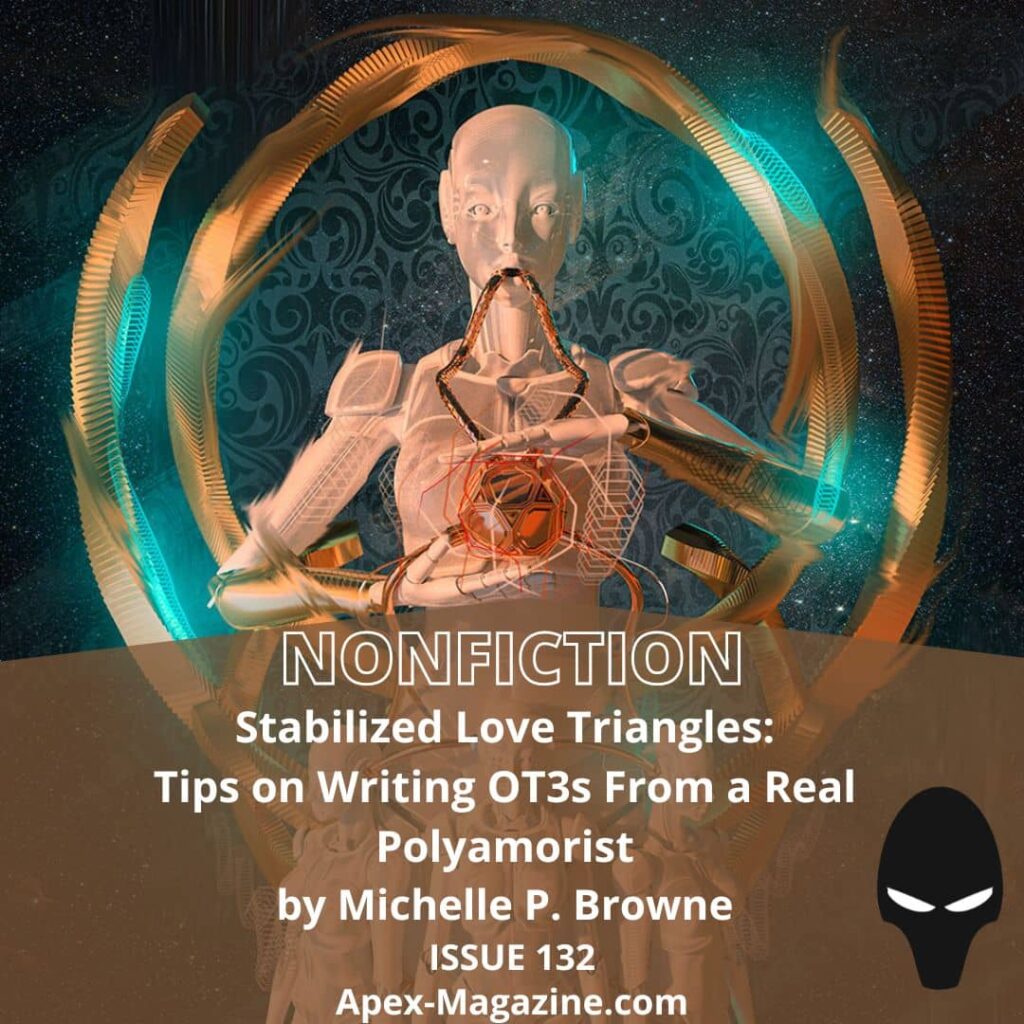