Home » Nonfiction » So How Does It End?

So How Does It End? 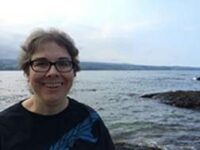 Wen Spencer is the 2003 John Campbell Award winner and author of ten novels, the most recent being Eight Million Gods. Born and raised in land–locked Pittsburgh, she currently lives in the middle of Pacific Ocean on the Big Island of Hawaii. It is a fact that constantly boggles her mind. All those maps of the United States lie; Hawaii is nowhere near California! While she is within sight of the world’s most active volcano, she feels safe from any zombie incursion from the mainland.

Humans have always been fascinated with stories about the end of the world. Almost every culture and religion has some myth dealing with the death of Earth. The natural question that follows “Where did the world come from?” is “how does it die?”

Such myths typically take it to a literal end: a god or gods or some god–triggered event reduces the Earth to an uninhabitable state. From Ragnarok, where the world is submersed in water, to the Book of Revelations’ “great, fiery red, seven–headed dragon” that “drags a third of the stars of heaven with his tail, and throws them to the Earth,” humanity as–we–know–it ends with the world.

With The Odyssey and The Aeneid we start to see the end not of the world, but civilization. The Trojan War, according to Greek myth, started because the goddess of discord, Eris, wasn’t invited to the wedding of the god Peleus and goddess Thetis. Death and destruction followed with gods playing favorites on both sides. After the Greeks were drained of their best and greatest and Troy was wiped off the face of the Earth, survivors on both sides had their post–apocalypse fiction. The Odyssey tells of Ulysses bouncing around the Mediterranean Sea trying to get home after the end of the war, while his wife dealt with zombies… um… err… suitors. The Aeneid concerns itself with the survivors of the city of Troy bouncing around the war–torn known world, trying to find someplace they could rebuild.

In 1719, Daniel Defoe published Robinson Crusoe. The novel was hugely popular and triggered a flood of similar castaway stories, briefly creating a genre known as Robinsonade. Swiss Family Robinson is thus a castaway story with a Swiss family. What is common to a Robinsonade proper is the idea that civilization is lost and then rebuilt. They can be regarded as forerunners of today’s post–apocalypse fiction. The loss of civilization isn’t utter failure of the entire structure, only failure of the fragile womb that an ocean–going ship represented. One bad storm and the travelers suddenly found themselves stripped of all modern conveniences and facing zombie hordes… um…. err… cannibals.

Both Robinson Crusoe and Swiss Family Robinson feature one key concept: the hapless traveler being sole survivor of a well–stocked boat. While the boat eventually sinks, it is filled with goodies. The crew and all other passengers are conveniently dead. The heroes are morally free to loot at will. Thus the “kid in a candy shop” trope is introduced into post–apocalypse fiction. The end has come, but the character is alive and kicking and civilization is there to be feasted upon.

In 1954, American writer Richard Matheson took post–apocalypse fiction in a whole new direction with his horror novel, I Am Legend. Matheson’s hero, Robert Neville, is sole survivor of the pandemic whose symptoms resemble vampirism. All of civilization has gone down the tubes and Los Angeles is free for the pickings.

Matheson replaces “cannibals” with insane, bloodsucking plague victims. At the start of the novel they are monstrous in nature and his hero is morally free to hunt and kill them. The victims, however, slowly overcome their disease and start to rebuild civilization. At the end, it is Neville who is the monster, sentenced to death by the new society.

I Am Legend laid the foundation for a new type of post–apocalypse fiction. The Omega Man, the 1971 movie based on Matheson’s novel, played constantly on weekend afternoons and late night through the late–seventies and eighties. An entire generation watched as Charles Heston drove around the empty streets of LA in a Mustang convertible, ransacked malls, and viewed movies in empty theaters. It deeply influenced zombie films like Dawn of the Dead, where the survivors retreated into Monroeville Mall, Night of the Comet, where the Valley Girl heroines go on a shopping spree to end all shopping sprees, and Zombieland, where the heroes drive Cadillac Escalades, campout in Bill Murray’s mansion, and visit an amusement park.

For those who like the apocalypse morally black–and–white, zombie stories reduce it to a nice simple “kill or be eaten.” Characters can plunder candy shops at will, but with a constant threaten of undead hordes to keep everything tense. Death! Destruction! All without moral checks or guilt for killing fellow “survivors.”

A zombie plague, however, is highly unlikely. We writers cite “mysterious illness” and “plague of unknown origin” and then gleefully have our fun. (Yes, the rumors that we giggle like maniacs as we write death and mayhem is true.)

In 1995, the movie Waterworld, took global warming to a logical but non–scientific ending that the icecaps melted completely and covered most of the world in water. Yes, global warming is an entirely real phenomenon, despite what non–scientific minds keep denying. Yes, it’s quite possible that the icecaps could entirely melt. No, the amount of water isn’t enough to cover the entire planet. What’s much more worrisome is how the ocean currents will be affected. If the currents don’t stir the oceans, mass extinction could follow. Maybe. We don’t know.

I actually have a great faith in the Earth. The life recently discovered in the reactors of Chernobyl and in the mud bottom of the frozen lakes of Antarctica means life will go on, no matter what kind of horrible mess we make of the planet. Human survival, however, is a much iffier proposition. We should be concerned about the extinction of the polar bears because it signals dire things in our future. Life will go on, just like life continued after the extinction of dinosaurs. But the human race might not be part of that life.

Yet we are a hardy, adaptable race. We can survive in the Arctic Circle and the Sahara Desert. We will probably survive global warming, even if it’s in scattered handfuls.

What won’t survive is civilization as we know it.

I moved to Hawaii in 2011. Living on an island in the middle of the Pacific Ocean has taught me how fragile civilization really is. Just days after we closed on our hilltop house, the tsunami sirens went off. All the television stations switched to emergency broadcast, warning that within six hours, we’d get hit with a massive tsunami that was currently wiping out entire towns in Japan. At four hundred feet above sea level, I felt safe and settled in to wait for the outcome.

My neighbors, more aware of our situation, rushed out into the night.

Tsunami means “harbor wave.” The origin is said to come from fishermen returning to their harbor and finding it in ruins even though they hadn’t noticed anything out of the ordinary while fishing out on the open ocean. My neighbors had survived a massive tsunami in 1960 that destroyed half the town. They knew that most of our town is at sea level, as is the airport and most of the power grid. Because of the six–hour warning, no one would die in the waves. We could be, however, utterly isolated without power. Even a minor tsunami wave could damage the harbor and take down countless power lines. My neighbors raided the stores of every bottle of water, all the canned food they could lay their hands on, bought propane tanks and generators, and then filled their vehicles and spare gas cans with gasoline. At one in the morning, the line for the gas station was half a mile long.

We were lucky. My town was largely unscathed. Japan, however, had parts of its country blasted back to the Stone Age. Roads were impassible. Harbors unusable. Water supplies fouled. The entire electrical gird reduced to a poisonous reactor and downed lines. Farmland covered with wreckage. For months afterward, Japan underwent country–wide rolling blackouts to deal with the shortage of power.

No, global warming won’t trigger massive sudden flooding. It will be a slow crawl inwards.

Landlocked mountainous countries like Switzerland will have nothing to fear from the raising water. They’ll sip their hot chocolate and wonder what all the fuss is about. The country of the Maldive Islands, however, has the world’s lowest natural highest point. The highest point in the entire country is only seven feet, ten inches above sea level. The average height of the islands is less than five feet. For Maldive Islands, global warming doesn’t raise the question of “if” they will vanish under the water but “when.”

The United States, moreover, does not stand alone. Seven billion people form an interconnected web. We drive cars with parts made around the world, using fuel from the Middle East, wearing clothes made in China, and buy fruits and vegetables imported from South America. Civilization as we know it is about to get the shit kicked out of it. And as it falters, our knowledge of the universe becomes vulnerable.

Consider the Library of Alexandria. For two thousand years the greatest of human minds gathered to study the world and record their findings. Much of what they learned forms the foundation of our knowledge now. In 48 BC, Julius Caesar ordered it burned. People even today rage over the loss. What few people realize is that the scholars fell back and created a daughter library located in another part of the city, known as the Serapeum. That library was destroyed in 391 AD as Christians attempted to stamp out all pagan religions by tearing down temples, melting down statues of pagan gods, and oh yes, burning anything that could be put to flame.

The Mayans were skilled astrologers and had mapped the movements of planets and stars with extraordinary accuracy. They recorded their observations in folding books called codices, printed on paper more durable than papyrus scrolls. Almost all the knowledge that their civilization gathered over a thousand years was wiped out by Bishop Diego de Landa in July of 1562. De Landa wrote: “We found a large number of books in these characters and, as they contained nothing in which were not to be seen as superstition and lies of the devil, we burned them all, which they (the Maya) regretted to an amazing degree, and which caused them much affliction.” One ignorant man caused a thousand years of careful study to go up in flame.

Nor has this willful destruction of science stopped. Just witness the attempts to remove evolution from the Texas schools. Rest assured that if our civilization falters, there will be zealots with torches ready to take advantage of the weakness.

The sad part is that we’ve plundered all the easily accessed resources. There will be no large copper deposits to provide another Bronze Age. There will be no vast seams of coal or crude oil to fuel a second Industrial Revolution.

Many cultures around the world have a myth of a great flood. The truth of those myths might be that their civilization was contained to a single valley, or one coastline. A flash flood or tsunami could have reduced the population to a handful of survivors. The survivors may have resettled to someplace safer, with only stories of a lost past.

It is ironic that sometime in the far future, our descendants will have “myths” of a great flood that covered the entire world. Legends of a great past, but no way to rebuild.

That is how the world ends.

Unless, of course, a giant meteor hits us first.