It always starts in a bar. The barmaid (always buxom) has been serving beer since the church bells rang, precisely at five. Inside, the minstrel has been playing his lute, and the blacksmith drinking one stein after another. The door opens—in enters the mysterious, cloaked thief they’ve been waiting for. And now, the quest can begin!

And here’s where I start thinking, Not this again!

As a literary agent, one of my most common tasks is reading manuscripts from the slush pile. I’m also a historian who writes about the history of the middle class. Because of these two occupations, I’m very aware of historical errors in fantasy literature—not so much getting the facts wrong, but getting the feel of the past wrong. I would argue that one of the biggest stumbling-blocks authors face is class, and not in the way that might be most obvious. Most writers understand inequality and unfairness; most manuscripts that I see understand that in previous eras of human history, some people were treated as if they were worth less than others. The problem is that we live in a world where about eighty percent of Americans think they are middle class, and that writers accidentally project middle-class culture back into the pre-modern era.

We can use the term “middle-class” to mean that a person has enough money to be comfortable, but that’s not how I’m using it here, and it’s not what I think people in general mean when they call themselves middle-class. I think that they believe that they have a set of middle-class values, which include such qualities as diligence, reliability, self-control, and focus. Middle-class culture probably was born in the cities and towns of the early modern world. It should not be projected backward into medieval life, and its role in shaping early modern culture was limited. Basically, if your fantasy society doesn’t have a steam engine, it probably has a very small middle class, and the middle class that does exist is in the towns and cities.

Several of the anachronisms that I see in fantasy literature have roots in their authors’ steeping in middle-class culture. For example:

To quote historian Fernand Braudel (whose books are a fantastic read), “Now the world between the fifteenth and eighteenth centuries consisted in one vast peasantry, where between 80% and 90% of people lived from the land and nothing else.” In other words, if your fantasy novel is set in a pre-industrial world, most people would have been farmers. And yet I can’t think of a single fantasy novel I’ve received in my slush pile with a farmer protagonist who stays a farmer throughout the book. (Luke Skywalker types who leave the moisture farm don’t count.) In fact, farmer-protagonists are incredibly rare in general.

I agree that it would be very hard to write a quest story where the hero never leaves the farm (By definition!). I encourage you to take inspiration from a more place-bound genre instead: a ghost story, a horror story, a Gothic, a mystery novel, or a romance. I think a medieval-inspired version of Tremors could be really successful.

Living on a farm in a pre-industrial world meant that you needed a diversity of skills: agriculture, yes, but also veterinary skills, food preservation, carpentry, cooking, the manufacture of clothing, hunting, and so on. In today’s world, however, the middle-class person is encouraged to have one great skill that will result in paid employment, probably cultivated through education at a school—any other talents are hobbies. This is a problem when the author treats his characters the same way. I often wonder how so many tiny fantasy-novel villages support a full-time blacksmith, rather than just having a farmer who is particularly good at making horseshoes and will trade for a wheel of cheese.

Taken to its extreme, this assumption can create a fantasy setting that resembles the Renaissance Festival: lots of minstrels, jugglers, food wenches, glassblowers, and knights. This can be a lot of fun (who doesn’t love eating fried dough and yelling “Huzzah!” at your friends?) but the reader will eventually wonder where all the food is coming from.

Again, think of this as an opportunity rather than a restriction. How does it change your story if, instead of each of your heroes being good at one thing, they had overlapping talents? If they had to argue, for example, about the best way to track your villain? Did it hurt the Avengers movie that both Tony Stark and Bruce Banner were scientists?

On a similar note, doesn’t thinking about characters in terms of their personalities and objectives, rather than their job titles, result in more sophisticated fiction?

Work wasn’t organized by what the clock said until the Industrial Revolution. The pre-modern world was much more task-oriented than time-oriented. If a sheep went into labor, or a crop must be harvested quickly to preserve it from rain, farmers worked until the task was done; if it was the middle of winter, and the fields were covered with snow, farmers slept and rested a lot more. This went with a general attitude of vagueness about time in general—most people didn’t know exactly how old they were (and none of that “I have fourteen summers” please—that’s still too precise!). It’s very easy to slip into anachronistic uses of time, because it’s such a different mindset from our own. But always remember—would your characters even have the technology to tell time and date precisely? And why would they care?

This murkiness about clock time extended into daily life. In the same way that fantasy writers are often accused of treating horses as if they were cars, modern writers tend to underestimate the amount of recovery time for human workers built into a physically active world. For example, a pre-industrial ship’s carpenter described a workday that went from sunup to sundown, but included breaks for

Lunch was in there somewhere, too. This willingness to rest during work hours was very typical—but try to get away with this at the office today! Writers should take this as an opportunity to be alert to the moments of leisure and beauty that animated pre-modern life.

Let me say something really obvious here: pre-modern people were different from the average fantasy fiction writer. (For example, I’m writing these words on a computer right now—what would my medieval counterpart think of that?) But as a historian, I think that this divide gets really interesting when we start thinking about how they were different from us, not because of their technology, but because of the way that they saw their world. They lived isolated, rural lives, where they had to be good at many things to succeed, and they worried less about time than about what needed to be done. Of course, when we’re writing fantasy fiction, we don’t have to be tied to the way things really were in the past. But a fresh look at how we’re projecting our own assumptions about time, work, and identity backwards can make our writing more innovative. 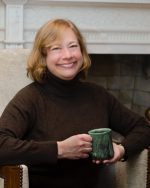 Jennie Goloboy is a literary agent at Red Sofa Literary in St. Paul, MN. Her book Charleston and the Emergence of Middle-Class Culture in the Revolutionary Era will be published by University of Georgia Press in 2016. She also writes fiction under her pen name Nora Fleischer.

Jennie Goloboy is a literary agent at Red Sofa Literary in St. Paul, MN. Her book Charleston and the Emergence of Middle-Class Culture in the Revolutionary Era will be published by University of Georgia Press in 2016. She also writes fiction under her pen name Nora Fleischer.