It’s been the center of much debate and conversation lately due to the concept entering the mainstream public consciousness. This is even truer now that Black Panther has broken all sorts of box office records. Honestly, this an exciting time for someone like me, as I believe that Afrofuturism is an ideology and practice that every Black person can benefit from. And with Afrofuturism’s increased visibility has come attempts to define it more truthfully. From these conversations, we get questions like “Who is Afrofuturism for?” and “What can it really do for Black people?”

These are, I believe, good questions. People are using these questions to hash out some real thoughts about exclusion, relationships between Black people globally, and the types of futures that Black people deserve. I’m here for many of these conversations, and I’m here for lots of these questions. We are only going to discover our most promising futures by staying in dialogue: dialogue with our art, with our communities, and with each other.

I am not here for anyone “owning” Afrofuturism, or staking a dishonest claim on it, or attempting to erase its real history as a mode of thought and creation that was born of Black American writers and thinkers.

Any conversation on Afrofuturism from an African creator or practitioner that begins “I feel as if I/the people I identify with have been excluded from the larger movement/definition of Afrofuturism” is valid, and other groups of Black people should take it seriously.

Any conversation on Afrofuturism that begins “I think that one group of Black people should be centered over another when defining Afrofuturism or else the whole idea loses credence” is trash. Period point blank.

One of the central tenets of Afrofuturism is that Black creators take lessons and spiritual resolve from their past to reckon with/navigate their present and create better futures. The idea that the work that my Black American spiritual and literary forebears did in their private writing spaces and with their colleagues to center, guide, and form a collective identity for themselves as creators is wrong because it does not center Africans over other groups of Black folks really messes with me and is a gross misrepresentation of what they intended Afrofuturism to be, no matter what people say. History matters. Context matters.

I’m not arguing that we’ve done this Afrofuturism thing perfectly. Yes, the term was created by a white man, but as always, Black creators were doing that work long before there was terminology for it. And yes, we are only just now coming to a unified idea of what Afrofuturism is, and that has only come through rigorous scholarship, public debate, and community practice. Yes, there is still room to debate over a clearer, more unified idea or theory of Afrofuturism. Yes, most of the public discourse around Afrofuturism is focused on the Black American conception of it, and even that is changing. Afrofuturism isn’t a locked compound, nor is it a one-size-fits-all solution to the question of Black futures. Afrofuturism is also, on many levels, a personal practice that individuals define for themselves as they learn more about it, because there are as many possible futures for Black people as there are Black people—and because we live in different places, these futures/futurisms can be regional without competing with or blocking out other Afrofuturist ideas.

The underlying assumption in this centering argument is that Black Americans actively try to de-center, diminish, or otherwise harm African creators in their conceptions of Afrofuturism. A look at how Black Americans approach Afrofuturism, within their own writing and physical communities, shows that this is not the truth. Black American Afrofuturists respect Africa and the connection that we have to the Continent and our ancestors there. Afrofuturism for Black Americans has a political, ideological, and philosophical definition that has been defined by our experiences in the United States, from beyond the slave ship until now. Black American Afrofuturist creators have not presumed to speak for African creators, nor have they openly called for de-centering them. If anything, the Afrofuturist work from Black Americans has been to clearly define what Afrofuturism means for ourselves in our own sociopolitical realities. That should be the conversation here. Not one of de-centering and erasure. How can anyone argue that the best course of action to creating a more unified or inclusive definition of Afrofuturism is to diminish and eventually remove people’s experiences and those essential spiritual connections from the entire concept?

That argument also messes with me because it removes and de-centers other groups of Black people. (Shout out to Caribbean writers for always providing perspective on this that my privilege as a Black American can cause me to miss). Centering Africans in Afrofuturism de-centers and eventually erases entire groups of people who are neither African nor Black American in identity or their location in physical space, people who because of their own connection to the Africa in themselves might benefit from the lessons and ideas they might generate from it. This take is especially unfair given than contemporary Afrofuturist critical theorists like Reynaldo Anderson note explicitly that contemporary Afrofuturism is Pan-African, especially so given the historical contributions of Black Europeans and Black creators from the Caribbean to the Afrofuturist project over the past century.

I’m not an expert in Afrofuturism. I’m not in the academy—I do community work as a day job, and my experiences there have caused me much pain and have also created in me a desire to create lasting systemic change for Black people everywhere. I’m a regular guy who writes speculative fiction because I believe that it can get us free. I’m a writer who works to create space and opportunity for Black writers everywhere, no matter who they are or where they’re from. I’m a dude who studies Afrofuturism because I see it as a liberation ideology that can create deep political and scientific agency and community shifts (and eventual transcendence, “a post-now” “future” [1 Social Text, volume 20, number 2, (71), Duke University Press https://read.dukeupress.edu/social-text/issue/20] ) among Black communities, no matter where they are. But I do know that the Afrofuturism space was intended for all Black people.

A future that is built on ignoring history, de-centering people, and fomenting bad-faith arguments is a future using the same blueprint that has failed us historically. And that kind of future is not one that I want to be a part of. Nor should you.

Troy L. Wiggins is a writer and editor from Memphis, Tennessee. His short fiction has appeared in the Griots: Sisters of the Spear, Long Hidden: Speculative Fiction From the Margins of History, and Memphis Noir anthologies, and has appeared or is forthcoming in Expanded Horizons, Fireside, Uncanny, and Beneath Ceaseless Skies. His essays and criticism have appeared in the Memphis Flyer, Literary Orphans Magazine, People of Colo(u)r Destroy Science Fiction, Strange Horizons, PEN America, and on Tor.com. Troy is Co-Editor of Fiyah Magazine of Black Speculative Fiction, and he blogs frequently about writing, nerd culture, and race at afrofantasy.net. Troy lives in Memphis with his wife, Kimberly, and their two dogs.

Troy L. Wiggins is a writer and editor from Memphis, Tennessee. His short fiction has appeared in the Griots: Sisters of the Spear, Long Hidden: Speculative Fiction From the Margins of History, and Memphis Noir anthologies, and has appeared or is forthcoming in Expanded Horizons, Fireside, Uncanny, and Beneath Ceaseless Skies. His essays and criticism have appeared in the Memphis Flyer, Literary Orphans Magazine, People of Colo(u)r Destroy Science Fiction, Strange Horizons, PEN America, and on Tor.com. Troy is Co-Editor of Fiyah Magazine of Black Speculative Fiction, and he blogs frequently about writing, nerd culture, and race at afrofantasy.net. Troy lives in Memphis with his wife, Kimberly, and their two dogs. 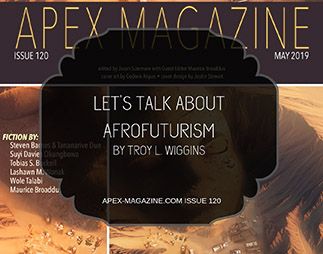