Making up your story as you go along has been variously called being a pantser, a gardener, or a discovery writer. Whatever you call it, this approach is what works for me. I can’t/wouldn’t change it, but it does entail some floundering in the middle, getting stuck a lot, and writing myself into corners.

If this happens to you too, here is some advice that has worked for me.

Writing the beginning of a book is exciting; everything is new, you’re creating the world, meeting the characters for the first time. The end is also exciting because all the plot threads are finally getting tied up and you should have a finished first draft soon.

The middle is where you have to make the magic happen—where the characters start finding answers to the mysteries they stumbled on in the beginning, the part you were really excited about. You have to make all the cool stuff you came up with earlier make sense. This is when the writing can feel like a slog, and you want to quit this story and go write something else. You might want that really, really badly. But if you do that with every book or story you write, you end up with zero finished work. (This is why agents and publishers who take unagented submissions only want to consider finished work from new authors. It’s a lot easier to start a book than to finish it, and they want to make sure you can finish.)

You might be tired, you might just need a break. But if you’re saying to yourself: “I have to write this part, and I don’t want to,” do you really have to? If you don’t want to write it because it’s digging into some painful emotional knots, that’s one thing. (That’s a whole different article right there.) But if you don’t want to write it because thinking about it, in your heart of hearts, makes you go “meh,” that’s a problem. If it bores you, it’s going to bore your readers.

It’s okay to make something else happen instead, even if you’ve had this part planned from the beginning. In genre writing, we’re often using the same set of elements and tropes over and over again. What makes your story special is you, your vision, your take on those genre elements. So don’t take your story to the place you think you’re supposed to take it; take it to the place that’s important to you, that feels right to you.

Sometimes you’re going along pretty good, writing your story, la la la, and you suddenly stop and can’t go on. You don’t know what’s going to happen next. Or the thing you wanted to have happen next doesn’t make sense anymore. The story was going along smoothly, but now it’s all awkward and bumpy and wrong. It doesn’t match the image of the story stored in the back of your brain somewhere. You find yourself having to invent elaborate justifications for actions that you know in your gut are out of character, that doesn’t fit your world anymore. You’re hand-waving things, hoping no one notices that they don’t work.

Sometimes this is a logistical problem. A sequence of events can sound great when you first come up with it, and it’s only when you start writing those scenes that you see the flaws. Maybe you know your characters better by now, you have a real sense of who they are and how they behave under stress, and your plot needs to change to accommodate that.

I loved Tim Gunn’s tutorials when he was on Project Runway. He’s been a teacher and a mentor to creative people for a long time, and a lot of what he says can apply to any artistic project. One of the things he will tell people is, to paraphrase, “You need to free yourself from this” where this is the thing you’ve worked yourself into a corner over. That means you need to step back from the flawed thing you have been trying to fix and mentally start over. Your basic idea is probably still good, but somewhere along the way you veered off the track.

The longer the work, the more likely the plot problem doesn’t originate at the point where the story-car slid off the road and your writing came to a halt. The story may dead-end in chapter six when you realize this is just not working, but the groundwork for chapter six was actually set up in chapter two. You need to stop hammering at chapter six, stop trying to make it work, and start thinking about how you got there.

Are your characters taking the next most logical step to figure out their problem? Did they/you make an assumption somewhere that doesn’t make sense? Is the solution too easy? Is the solution too complicated, because it’s trying to fill in plot holes you didn’t notice before? Are you losing point of view by making the characters do what you would do in that situation rather than what they would do? Are you losing point of view because you’re making the characters do something for plot reasons that don’t make sense with their established personalities or worldview?

When you’re thinking about a story, telling it to yourself, you can unintentionally gloss over the bits that don’t work, and they slip past unnoticed. When you’re trying to make another person understand what you’re talking about, those tricky bits can stand out like they’re lit up with neon.

For example, there’s a bit in Dorothy Sayers’ Gaudy Night where Harriet is working on her latest mystery novel, dictating it to her secretary, and she’s trying to write a scene where a guy, Wilfred, finds the murdered man’s handkerchief in his girlfriend’s room, and he assumes she has it because she’s the murderer. Harriet can’t make the scene work, and finally, the secretary says, “If that happened to me, I’d assume the laundry just made a mistake.” Yeah, pretty much. Harriet solves her plot problem by going back to the beginning of the book and making Wilfred the kind of person who would naturally make the assumption, on very poor evidence, that his girlfriend is a murderer.

So the keys to getting unstuck are, for me anyway, 1) to be willing to cut or change things that don’t work, 2) to make sure I’m writing the story that I really want to write; and 3) to step back. If you’re trying to get through a maze and you come to a dead end, you go back and look for the first wrong turn you took; you don’t stand there pressing your body into a thorny hedge trying to will the pathway to appear. I hope that helps. Good luck and good writing. 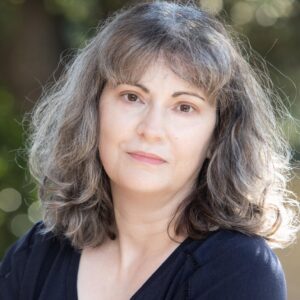 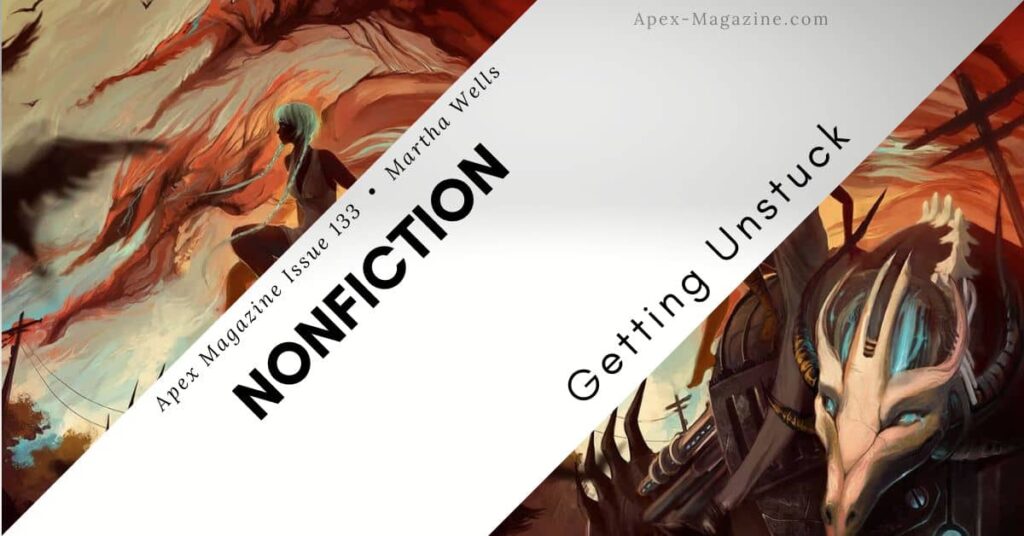