One of the great strengths of science fiction is its ability to present philosophical questions like “What does it mean to be human?” and “Where are the boundaries of our perception and reality?” in broader, more interesting terms simply by the function of its form.  I’m going to list five books that challenged my philosophical perspectives and in a large (or small) way shaped the way I see the world.  Certainly, not everyone will agree with the lens of importance I view some of these books, but if you’ve not read these, I encourage you to check them out.

(One) The Sparrow by Mary Doria Russell – This is the story of Father Emilio Sandoz, a Jesuit linguist sent on a first contact mission with an extraterrestrial civilization and the Vatican inquest that is convened to delve into the events that lead to Father Sandoz’s fall from grace.

The horrors that Father Sandoz endures are placed on a backdrop of a jaunty space opera/adventure. When they occur, you’re jarred like a struck bell. Sandoz, such a likable and relatable character (even if he does start a bit too pious in service of the plot), makes for a great stand in for the reader, so when things turn dark, the reader will fill it in the pit of his stomach.

Father Sandoz, quite reasonably, questions his faith and challenges his assumptions about God. The author couches this intense philosophical debate with the tension provided by the Vatican inquest (and its judgmental priests who dare question Sandoz in such a manner after what we’ve seen him go through), leaving the reader both breathless and dazzled by thought upon finishing.

(Two) Hyperion by Dan Simmons – Seven people set out on a pilgrimage to a terrible creature called the shrike to ask for the salvation of the human race. No doubt, this made for an impressive elevator pitch when author Dan Simmons put it forth to his editors. And yes, the book is about exactly that… but it is also about so much more…

Some 400 years in the future, mankind is embroiled in a war between the Hegemony and the Swarm. The Hegemony is aided by supercomputers (simply called the AI) that are so advanced that they can predict the future with 99.9999% accuracy. Oddly, though, the planet of Hyperion prevents the AI from being prognosticators with 100% accuracy, and in all practical senses, the most powerful entity in the known universe. The Hegemony decide to send seven pilgrims—the only seven people known to have survived an encounter with the shrike—to Hyperion to seek an explanation for the planets perplexing nature.

Legend has it that the shrike has the power to grant wishes, and that one person on a pilgrimage will be granted a wish (the other six will die horrific deaths befitting of a demon made entirely of razor sharp blades). As it happens, all seven pilgrims have their own reasons for going to extraordinary lengths for a chance at a wish. On the way, six stories are told, as each pilgrim shares his or her reason. In these six stories, Simmons is able to showcase the best, the worst, and the most redeemable aspects of being human.  The author is able to draw power from the source material (the poet Keats and Chaucer’s The Canterbury Tales) to give the book a classic feel.

(Three) Altered Carbon by Richard K. Morgan—Meet Takeshi Kovacs, one of most well-conceived anti-heroes in all of science fiction. He is the star and protagonist in Morgan’s sci-fi neo-noir pulp adventure series about a really hard to kill mercenary in the 25th century. It isn’t that Kovacs is one tough son of a bitch that makes him so hard to keep down… well, he is… but it has more to do with the titular altered carbon technology (resleeving). For those with enough resources (namely, money… though having the right connections will work, as well), you can have your brain/consciousness digitized into something called a cortical stack. This stack can then be placed into most any host body (typically vat grown). Give a man over a century of mercenary and military training along with a tough young body, and you have yourself a badass.

Morgan brilliantly layers together a whodunit mystery surrounding the attempted murder of one of the world’s oldest (thanks to continual resleeving) and richest individuals. On top of that achievement, he drops Kovacs into a 25th century Earth so believable that you’ll come to have a hard time believing the world will be anything other than what the author has imagined.

It is when the Morgan digs into the age old question of what constitutes ‘self’ that you sub-consciously placing yourself in various “What if” scenarios and gauging how each affects your personal philosophies on what it means to be ‘you’, and what it is about a person that makes them unique.

(Four) The Alchemy of Stone by Ekaterina Sedia—I have always been a sucker when it comes to the humanization of mechanical objects. And I find in Mattie, the clockwork protagonist of Sedia’s novel, the single most intriguing mechanical invention in literature I’ve encountered in a number of years. Sedia’s book interweaves a number of plots that will leave your brain spinning much like Mattie’s own clockwork gears. The foundation of the novel rests on Mattie’s search for independence from her controlling (and oddly sympathetic) master Loharri. This leads Mattie down a path where she aids the city’s gargoyles quest to be free from stone, and into a vicious class war that threatens to burn the city to the ground.

In a mere 300 pages, Sedia gives the reader a lot to chew on. With a heart-wrenching finish, you’ll be both intellectually stimulated and depressed as hell upon finishing this book.

(Five) Solaris by Stanislaw Lem—I will go on record and state that this book can be a slog. At times plodding and self-indulgent, Lem has no qualms about giving us descriptive scenes that read like old IBM mainframe manuals written in the 80s. But on my second read of this fifty-year-old novel, it occurred to me that perhaps the style of the narrative serves as a plot function for the novel. That, at its kernel, humanity is a boring species, so the sometimes boring prose reflects such an assertion (and I’m further convinced of this as there are times Lem puts together jaw-dropping scenes and situations). We are wired to see ourselves in everything. Additionally, as a human, we are quite content with the status quo. Let’s not excite our lives with the addition of alien life, alien thoughts.

But the primary point of argument present in Solaris is that of identity (what makes a person… a person… a common thread in science fiction). If Kelvin sees the alien as his wife, then by all intent and purposes, isn’t she that person (especially if the construct has her memories)?

We are pleased to announce that Iori Kusano will be guest-editor of the upcoming Apex Magazine bonus issue that will focus exclusively on Asian and Pacific Islander authors and artists! This issue was funded via a stretch goal from our successful 2022 Kickstarter. Iori Kusano is a queer Asian American writer, competitive Yu-Gi-Oh! duelist, and Extremely Ordinary Office Gremlin living in Tokyo. They are a graduate of Clarion West 2017 and their fiction has previously appeared in Apex Magazine and Baffling Magazine. In addition to cohosting Righteous Kicks, a Kamen Rider podcast, on the Skiffy and Fanty Network, they write reviews for Strange Horizons. Iori 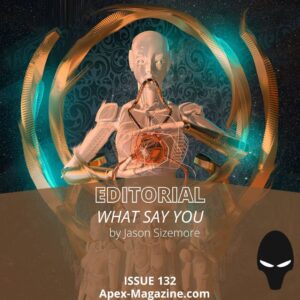 What Say You: Editorial

In 2005 when I had the idea to publish Apex Science Fiction & Horror Digest (a print ancestor of this zine), I wanted to publish sci-fi stories that served as cautionary tales regarding our future. Most of it was dark and foreboding because that’s the direction many people feared we were heading. As we turn the corner on 2022, many of those concerns have become reality. In particular, environmental concerns have moved from potentially alarming to actively dangerous. In times of crisis, the imbalance of resources between the haves and the haves not increases. Since most of us fall solidly 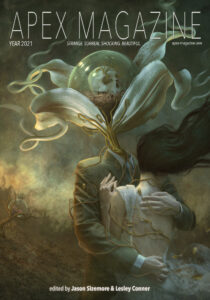 We’re funding a print anthology of our 2021 original fiction content!