Home » Current Issue » Accost Me, SFF, and Waste My Time

Accost Me, SFF, and Waste My Time 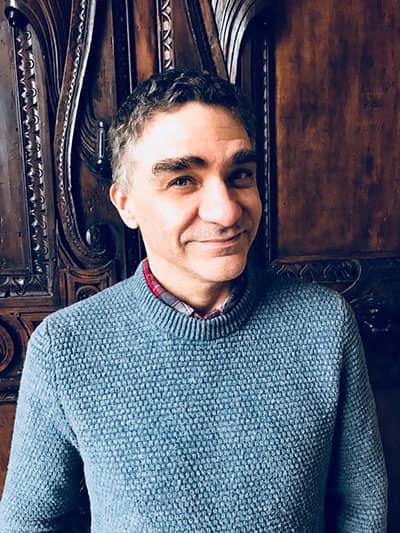 Carlos Hernandez is the author of the award-winning Sal and Gabi Break the Universe, its sequel, Sal and Gabi Fix the Universe, the short story collection The Assimilated Cuban’s Guide to Quantum Santeria, and numerous stories, poems, and works of drama. Carlos is Professor of English at the City University of New York, with appointments at BMCC and the Graduate Center. He is also a game enthusiast and designer. He is currently co-developing Negocios Infernales, the “Inquisition and Aliens” TTRPG, with his wife, C.S.E. Cooney.

Language is truth-obsessed. Every declarative sentence attempts to form facts, with all the surety and sangfroid of an ice cube tray. All interrogatives climb a mountain in search of the prophet at the peak who can give them, finally, the declarative sentence that’s been missing in their lives. Interjections are desperate barks, pre-words, really, words before there were words. And imperatives. Dear imperatives. No rhetorical mode recalls us to our impotence better than you. When humans present a list of demands—as if we knew enough to know what to ask for—does our cochlea-lacking universe hear them?

The answer is yes: via other humans, who are just as impotent as you, and who were designed by the universe as a kind of call-center that will waste your time until you hang up. The subtext of every imperative is, “Please, help me. I’m dying.” And the universe’s implicit answer, always, is, “Your call is important to us. Please wait for the next available human to fix your life.”

Normal communication is truth-obsessed. Art is not. Art is dilatory.

Art doesn’t just say, “Eat your vegetables.” There once was a woman who never ate vegetables, until one day, a stranger came to town selling the rarest vegetable of all, the Celery of Immortality. “I want to live forever,” said the woman, so she asked the stranger how much the Celery of Immortality cost. “Now that is a very interesting question,” the stranger replied, and everyone knows at this point the stranger has every intention of leaving this woman’s life in utter ruins via a very bad, very ancient bargain.

But the story goes on, the bargain is struck, and the woman either gets the Celery of Immortality or doesn’t, and who knows if by the end of it your children will be incrementally more likely to eat vegetables. Hell, you’re an adult, and you had ice cream for dinner last night.

Art is dilatory because my mami was killed in a car wreck. It was too soon ago. She was riding in back and had her seatbelt on; the seatbelt crushed her ribcage. I cannot consider my mami’s crushed ribcage without feeling myself becoming deranged. She may have taken up to half an hour to die, blood filling her lungs until she suffocated. If she was conscious, she would have heard herself drowning. She was trapped there by a crush of metal and the corpse of her friend, who probably died before she did. I am 100% sure she left life reciting a rosary if she were conscious.

But the authorities on the scene, the ones we empower in society to make declarative sentences about life and death, say that it is highly unlikely that she was conscious. She never knew she was dying before she died, they told my family. She knew no pain, they said.

That may have been a mercy on their part. What could be gained by telling us that she knew she was dying for 30 minutes, in utter agony, hemorrhaging and helpless and alone? They gave us the declarative sentences that were meant to make us say, “At least she didn’t suffer.” They are the experts after all. I’m supposed to trust their sentences more than the ones I tell myself, the ones that argue they’re just saying she didn’t suffer as a mercy.

Now you know that my mami died, and a few facts about how. You have some inkling of how much I miss her. You know, too, that if you felt saddened by the description of her death, it’s no match for the unending threnody my heart sings for her.

But imagine if it were. Imagine if, by communicating the circumstances of Mami’s death to you, you felt my grief as wholly and abysmally as I do. If communication could do that, everyone’s grief would become everyone’s grief and we would die, we’d all kill ourselves, no more humanity.

And yet, that is what most language attempts to do, most of the time. It tries to render the most complete truth, convey the most accurate facts, encapsulate life as it occurred. We call this “being objective.”

If we succeeded often enough at objectively rendering reality to one another, it would end our species.

Art is dilatory, the same way slaloming a mountain can save a skier’s life. SFF more so than realism, but all art fundamentally. Art says, “Here is a picture and here is another, and I’m not even sure the two are connected.” “Here is the scent of lilacs on a summer zephyr; here is injustice; here is a fossilized trilobite, evidence of a world long gone; and here, shh, listen! Is there anything more beautiful than a faraway train?” “What if there is no meaning?” Art asks, but then, in the same breath, it wants your opinion about the bolognese. More pepper? It dips a spoon in the sauce for you, and when you try to take the spoon it smiles and resists, for it wants to feed you, because that will be funnier and more loving. Yes, art loves you; it knows it’s a mess, and so mysterious and mercurial that it lost the truth it meant to deliver to you somewhere back in Albuquerque.

But it has a kind restraint, too. A kind of drunken-master misdirection. Art, unlike most forms of communication, knows when it’s time to change the fucking subject already.

I’ve read enough SFF to have learned this lesson: seek not the Celery of Immortality.

And not just because it doesn’t exist. That misses the point of SFF. A key fact of all thought is that, once a thought exists, it refuses to remain useless. Thought, like dandelion seed, surfs the wind for fertile ground.

Let us stipulate that there is, in reality, a pronounced dearth of enchanted veg in existence. Fine: remove the celery. What is left? “Seek not immortality.”

Ah. Now I follow you, SFF. But I cannot agree. I want immortality. I want to destroy death. My mami is killed. I would undo the randomness and unfairness that unwound consciousness out of her body like pulling a loose thread on a sweater. Why not immortality?

Well. What does human immortality mean in a universe that will die? What happens to the human mind when it has lived six billion years? Once my mind has been Ship of Theseus-ed a few million times, can I still say Carlos and mean it? If I am immortal, does that mean every cell in my body is immortal? That seems like I would be a cancer unto myself, ever metastasizing. What if, as some physicists speculate, the laws of physics themselves aren’t consistent throughout spacetime? What does immortality mean in a universe where the rules governing matter are mutable? Does immortality just mean I will live long enough to die in a way no human has died before?

Ultimately, this is where thinking magical, celeriac thoughts lead me: the wish for immortality is a tantrum, a desire founded in such profound ignorance it approaches dogma. I understand that now.

But I couldn’t have understood that idea as a mere statement. I would have argued back (and, to my detriment, I am a fairly skilled debater). A question posed to me I would have answered—incorrectly. I would have ignored a command: “Tell me what to think. Hah! I’ll tell you what to think!” A cry in the wilderness might generate sympathy, but no epiphanies. I might free the animal caught in the hunter’s trap, but I wouldn’t write down its howls and whimpers to ponder later.

The problem with understanding an idea such as “the desire for immortality is wrong and misguided” lies in the fact that, at first, it is impossible for someone with love for this life to not want eternal youth and strength and immunity from harm. Artless language has as much chance of changing such a mind as a doomsayer’s sandwich board.

For an idea so far from my ability to conceptualize, I must free myself from all the sentences I have been telling myself all my life. Those sentences have, over time, made truth into a tightrope that I fear falling from. Perhaps I know I need to get off of this tightrope, or else tightropes will be the entirety of my life. Before I can get off it, however, I need to know I can get off it safely.

And then Art, from nowhere, bright as a Chagall, wafts down onto the high wire, its descent slowed by its colorful, frilly umbrella. It takes my hands and tells me that, while I was struggling to keep my balance, it wove a net beneath me. I nod. On three, we fall, laughing all the way down.

© Carlos Hernandez
← Whose Mortal Taste BOOK REVIEW: How to Get to Apocalypse and Other Disasters by Erica L. Satifka →