This month’s Apex Magazine cover is by Vinz El Tabanas, an illustrator and concept artist. Working on his own projects, as well as with publishers such as Upperdeck, he brings an interesting spin to science fiction and fantasy art.

APEX MAGAZINE: Your cover art for this month’s Apex Magazine is a nice mixture of science fiction, horror, and mythology. Did you have a particular story or mythology in mind that the piece is based on, either your own or someone else’s?

VINZ EL TABANAS: I created this illustration as part of a knowledge share between the artists of Ludia Inc., a video game company for which I worked. The principle was to start with a new theme each month, in this case it was rats and tea ceremonies, and create a concept. My idea was to humanize a sci-fi rat and look at how a ceremony could be done.

AM: Your DeviantArt galleries feature a number of xenomorphs from your illustration work with Upperdeck, such as “Xenomorph Collar 2.” How much leeway did you have to put your own spin on the iconic xenomorph designs?

VET: Upperdeck sent me Google spreadsheets with descriptions, and some screenshots of the movies. I did quick sketches, and we evolved the pieces like that until we agreed on a concept. Once validated, I then cleaned them up through the final versions.

VET: With the little time that I have, I try to find the right idea and the right composition as quickly as possible. The public often asks me to do characters that I don’t know, so it’s even more fun. I try to never do the same drawing twice, and I learn and improve at each convention.

AM: A piece like “Viking” combines character concepts with an action scene, with a unique sense of scale. As you are creating a piece like this, do you start with the monster or main character, the landscape, or a combination of ideas?

VET: I test the full combination of ideas just with quick drawings, with balls and masses of gray. When I like it, I start the painting and add in the details.

AM: Many of your pieces reference comic characters, and with some like your “Thanos Venom” piece, you’ve combined characters or put your own spin on them. How do you balance your own style with the unique visual aspects of each character?

VET: I’ve worked a lot on my style, to have something as unique as possible. I work again and again to improve my half-cartoon, half-realistic style. Each drawing is a particular story, I don’t have a precise diagram that I need to create.

This “Thanos Venom” is basically a joke with my wife. After Avengers: Infinity War, she told me to imagine if Thanos had merged with Venom, creating the ultimate enemy! I laughed and did the drawing.

AM: Thank you to Vinz el Tabanas for the interview, and you can find more of his work on his ArtStation profile at https://www.artstation.com/vinz_el_tab. 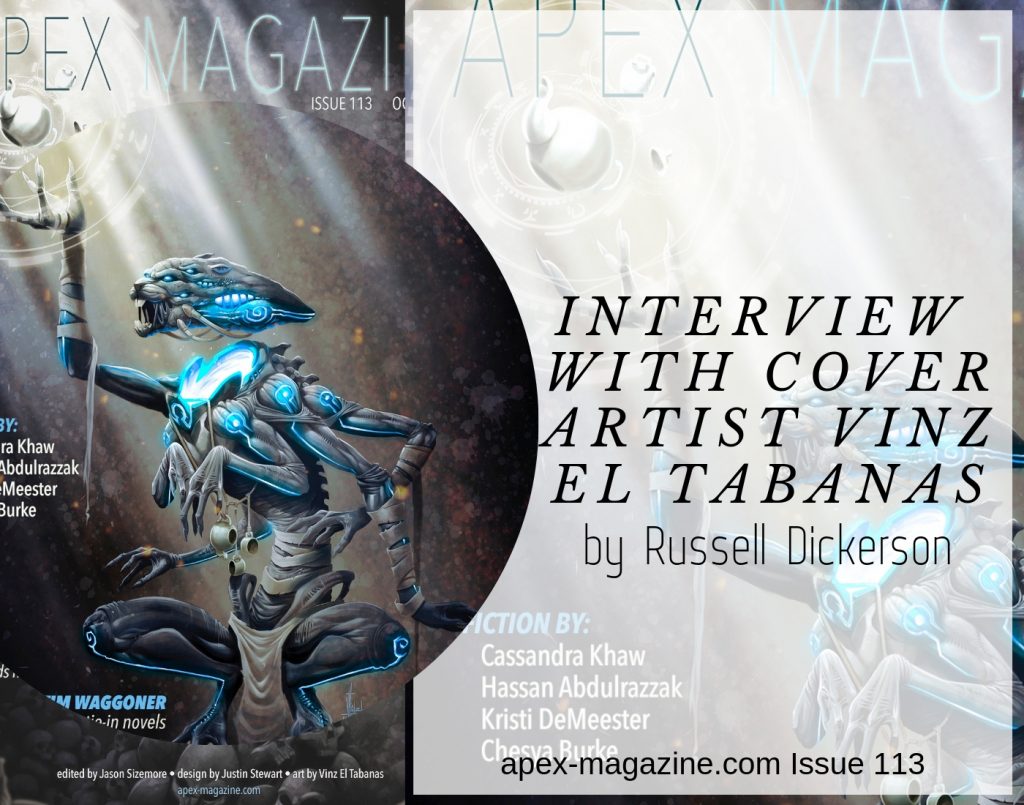