This month’s cover art is from Ronnie Jensen, a graphic designer and illustrator from Norway. Running a one-man design studio alongside his full-time day job as a UI designer, Jensen’s art shows his affection for hyper-realism and cinematic art styles.

APEX MAGAZINE:  Your cover for this month’s issue balances the futuristic with the present, and speed versus stillness. For a piece like this, how much of the story of what took place before the events shown, or after, do you have in mind while you are working?

RONNIE JENSEN: As strange as it may sound, I had no specific plan with this piece initially. As I recall, the only idea was to make this robot hover above the ground just a tad. The rest came along in layers of ideas, one inspired from the other. Like, “maybe add a busy city as a backdrop? At night maybe?” and “How about cars floating by, on different levels?” and “Oooh, I like those light trails—let’s add a few of those.” Then, “Hm, I need something that makes a story. How about putting a knocked-out body on the sidewalk?” and “Let’s make it rain, too, nobody notices a rogue assassin robot on a killing spree downtown in the rain at night,” and “Hey, let’s give the robot a raincoat like that replicant in Blade Runner had,” and so on. This is usually how I roll, more or less. Unless I already have a story to stick to, like when I’m creating a book cover.

AM:  On your blog, you discuss working on the dustjacket and endpaper art for an upcoming Tim Lebbon book, a story based on “The Rime of the Ancient Mariner.” How much freedom did you have throughout the process, from sketches to finished art, to develop your interpretation of the story?

RJ: I was given a lot of independence. The editor gave me no restrictions, no specific instructions, no sketches, no preferences, just the script and the physical format the art had to fit within. And a deadline, of course. The story itself was enough direction, I guess the editor probably felt the same way, and I liked the story! Very inspired, I made four concepts. I know, over the top, but that’s how I work at times. I presented the proposals, with mockups and a brief explanation of each one. The author and the publisher made their choice. The selected idea was based on the fact that it included various moments from the story. I also tried not to make the artwork too abstract or metaphorical, but more like a movie poster. To me, it is actually a warm tale dominating its horrific events. Hence the palette.

RJ: I am not sure if they go unnoticed, or if people care when they spot them. The point has always been to make it look like a bad shot taken on the go. No specific composition or anything artsy. I have made several sightings pictures when the “photographer” has made a snapshot. I imagine they try to tell their friends about the sighting. And the friends go,“Huh, that could be anything, a helicopter or a drone—” and then some laughter. The sightings images are not complex pictures, but they can be difficult. I have to be careful when I add objects that are not there, they have to be believable. These are natural photos, taken by someone witnessing a strange phenomenon in the sky. They didn’t have time to set up a tripod and compose the image, telling the UFOs to hold their positions. These are photos typically hidden in the x-files, not hung on the wall as great contemporary art. Also, they lean heavily towards photorealism. When people realize they are painted from scratch, using a photo as reference, they usually go “wtf!” I think the sightings images are more challenging than my Star Wars fan art. Any of them actually.

AM:  You mention your love of the Tie Fighter design in the description of your Star Wars fan art piece, “TIE Squadron X.” What do you find fascinating about not only this design, but the other ship designs you’ve painted? Have you always been drawn to aircraft and spaceship designs?

RJ: When I first saw the Tie Fighter, back in the day, I didn’t know what to think of it. It looked embarrassing. Two disks glued to each side of a ball. It made no sense! That can’t fly!! The X-Wing was more favored of as a flying, maneuverable, plane-like ship with blazing thrust engines, wings, laser blasters, and whatnot. You could recognize their functions. Years passed, and the Tie Fighter grew on me. In space, a cube would be as flyable as an X-Wing, so would a Tie Fighter. I made peace with it. The daring design made me more and more impressed. It is so simple. All the functions are more abstract and obscure. Maybe the artist just made it in a hurry. I don’t know. But this is a great design, anyway. Combining two simple, geometric shapes (hexagons and a sphere), and put in the right context made it an icon. No one can touch it without getting a slap on the back of their head. X-Wings can more easily be altered; give and take a few details, and we have a Viper.

The other ships I’ve painted are mostly based on crude 3D models. I like utilitarian vessels the most, with antennas and tons of details on the exterior. I also paint them from scratch, like “City Lights,” with simpler shapes and a smoother surface.

I think I have a normal fascination with airplanes. Though, I have to admit, I’m impressed with many of those designs. My favorite jet fighter designs are F-14 Tomcat and MIG-29 Fulcrum. Maybe because they symbolize a balance in power? The East vs the West power struggle?

AM:  Your series “Howdy!” was inspired by a Wild West challenge. Do you feel the art for this series is different than the rest of your portfolio, or more of a spin on the things you already do? Were there different challenges involved in coming up with a Western-themed series, compared to a science fiction series?

RJ: It is definitely something else. I was thinking of putting sci-fi related things in there, but I let go of that. Not sure why. I think it had something to do with the history. The unfair treatment of the indigenous, the settlers’ trials and sufferings, the contrast between harmony and selfishness. Perhaps I didn’t want to mess with it, adding stuff that was not there and pretending these things didn’t happen. Mixing lies with truths. I was not this reflective when I did these paintings, but in retrospect, it makes sense to me.

AM:  Thank you Ronnie Jensen for a look behind the scenes of his work and how he approaches his unique designs and ideas. You can find more of his work on his website at https://ro9.artstation.com. 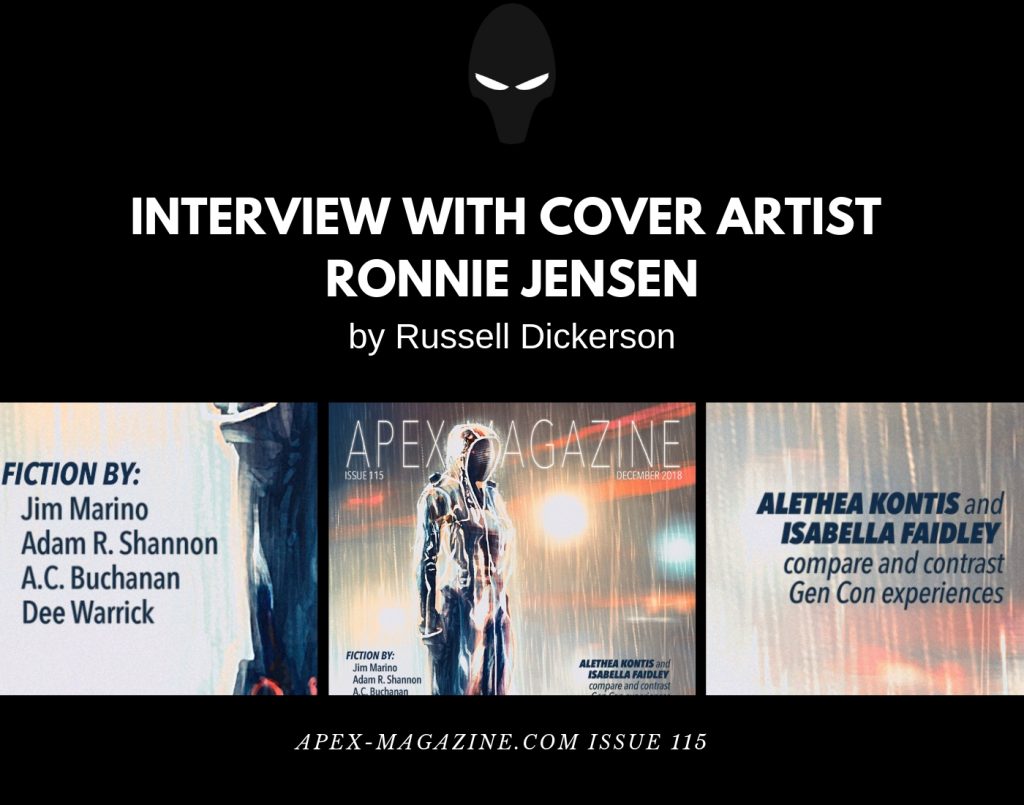