Exquisite artwork by Joel Chaim Holtzman, an illustrator and concept artist based in the Netherlands, graces this month’s cover of Apex Magazine. Holtzman explores a unique combination of Biblical themes, mythology, history, and the grotesque, and has worked for various clients in the book, film, and game industries.

APEX MAGAZINE: Your cover art for this month’s issue, “Sytri’s Seduction,” is a beautiful mix of good and evil. When you are painting a work like this, how do you find the balance in showing more of one than the other? How do you decide what to make overt and what to make subtle?

JOEL CHAIM HOLTZMAN: In “Sytri’s Seduction,” I wanted to emphasize a more sensual and seductive part of a rather occult chain of events. In the Biblical lore, fallen angels mated with women, who in turn gave birth to the so-called “half-gods.” There are numerous ways I could have depicted this interaction, and I chose a classic romantic approach. I wanted to throw the viewer off by adding a few otherworldly elements to the fallen angel, to hint at the sinister deeds being done under the false banner of classical romance.

AM: On your blog, you wrote about your piece “Flagellum Dei,” mentioning that it was your first completed battle image. You also wrote about spending more time on the movement, readability, and the flow of the piece. Was one of those more of a challenge than the others, or was it a push and pull between them?

JCH: It was mostly a push and pull between the two. Ever since I can remember, I have had a tendency to add a lot of detail in my images, but I only recently learned how to control them more efficiently through contrast and focal points. Having gotten that under the belt and a better understanding of anatomy/gestures, I took my time implementing that knowledge into the painting. Flow is something that comes with an understanding of composition, the rule of thirds, and the golden ratio. As an artist, you need to have the ability to guide the eye of the viewer to a few key elements. The rest of the image should support those crucial parts.

AM: Artists often mix fantasy with history and mythology, sometimes being very strict from the historical side and other times loosely using history as a springboard. Do you find that your work leans towards loose or specific interpretations, or does it depend on each piece?

JCH: It mostly depends on each piece. Back in the day, I used to work on a lot of “alternative history” imagery. Various historical characters interacting with fantastical entities to explain their influence and prestige. These days, I am still taking these principles with me, but I would like to explore “realism” a bit more. Biblical, mythological, and occult elements that are aligned with certain times and events in history that “could have actually happened” in a specific setting, backed with the right historical evidence, scriptures, and knowledge. I would like to delve deeper, rather than painting allegorical imagery.

AM: Your work ranges widely from concept art to illustrations, book covers, festival promotional art, and album illustrations. Have your experiences been different in those markets, or are they fundamentally similar?

JCH: Very little. The type of work was usually the same, either illustration or concept art. However, the more professional I became, the more I turned away from festival and album art and got more into illustrations and concept art. Festival/album art was very early in my career, and mostly from acquaintances who asked me to do the job. However, my work always leaned towards detailed illustrations, rather than artwork that should “catch the eye” in a more graphic design style. This meant that I pursued those markets less and I delved deeper into illustrative work for RPGs, books, etc.

AM: You have given a number of talks about your work and your experience as an artist, and you offer mentorship opportunities on your website. Are new artists more interested in the good (or bad) experiences that you’ve had, or more about techniques? What would you want to pass on to an up-and-coming artist reading this interview?

JCH: The things that I would like to pass on are numerous. Besides working incredibly hard, you need to be honest with accepting critique, studying, referencing, and simply being hungry for knowledge. Techniques are less important in my opinion, they will come in time while you work. The misconception that people make is that, with Photoshop, you have shortcuts and pixie dust that make you a great artist, while skipping over the fundamental steps. The basics are universal and can never be skipped. When mastering the basics step by step, you can work more efficiently by using certain functions that Photoshop provides, and that’s what I would like to teach my students bit by bit.

AM: Thank you to Joel for a look at his artwork and methods. Be sure to check out more of his fine work on his website at www.joelchaimholtzman.com. 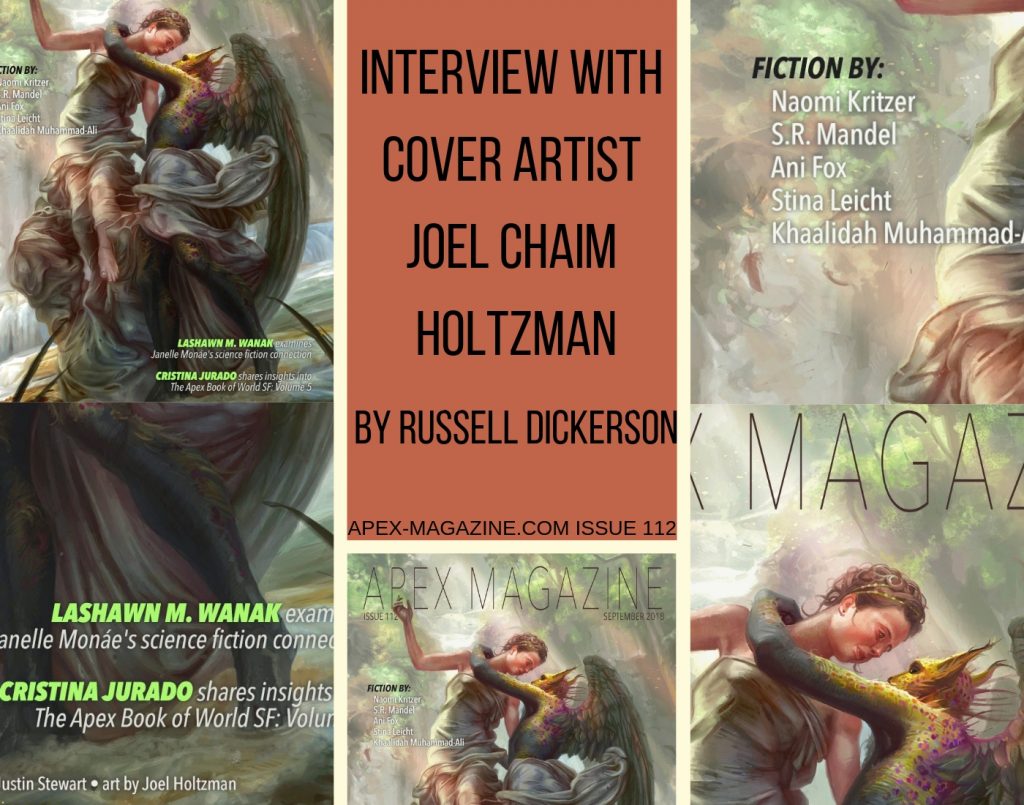