Reading “Master Brahms” by Storm Humbert is like being in a room of mirrors, for you to constantly ask yourself which is the reflection and which is the real person? What’s real, who is the original, and does it matter? Now, extrapolate that idea. Take it from a science fiction story into a near-future reality in which you can actually clone yourself. A fun science fiction story just became a horror story, didn’t it? “Master Brahms” has so many branches of conversation, I can’t wait to discuss this story with you!

If you get a kick out of this story (and I know you will!), you might also get a kick out of “The Association of the Dead” by Rahul Kanakia (Clarkesworld #46, July 2010), and David Brin’s novel Kiln People. I’m sure there is plenty of other fiction that deals with clones and what to do when/if an original dies and does it matter who the original is, but the Kanakia and the Brin were the first that came to mind.

Storm Humbert grew up in northern Ohio and currently resides in the Detroit metropolitan area. He earned his MFA at Temple University, where he studied under amazing instructors, including Samuel R. Delany. When not at his day job, Storm can be found running fiction writing workshops at the Westland Public Library. His work has appeared in The Legendary, JMWW, and Andromeda Spaceways.

Storm was kind enough to let me pick his brain about how this story came about, the work that went into building the rules of synths in the story, his literary influences, his experiences being a creative writing instructor, and more.

APEX MAGAZINE: This is such a fun story. The tightly focused plot immediately plays with the risks of surrounding yourself with clones. What inspired this story?

STORM HUMBERT: The inspiration for the story is two things, though I’m not sure in what order. One was the realization that I behaved differently around different people, specifically people who I basically knew from high school and people I’d met since. This gave me a feeling of a sort of fractured self sometimes, and I wanted to explore that with something literal. The other was the desire to write a story in which I got to play with 1st person pronouns (and even the proper noun) in a way that was similar to how Calvino plays with 2nd person pronouns in “If on a Winter’s Night a Traveller.” My play is obviously not as complex or impressive, but it was lots of fun.

AM: Why did Brahms create synths of himself? What would be the benefit to having clones of yourself running around, and risk having those clones think they are the original?

SH: I think he created them because he wasn’t actually all that likeable a person and found himself constantly lacking for company and entertainment. So, I’d say it was a combination of arrogance and necessity, but I also wasn’t overly concerned with this reason while writing the story due to the fact that the original Brahms both is and is not the main character. Also, the clones thinking they’re the original isn’t really a risk (or at least it’s not supposed to be) because they’re actually intended to see themselves this way, and originals are supposed to do all they can to perpetuate this illusion in order to treat their synths humanely.

SH: I think I would want to know, and I would hope that I would have the courage to find out, but ultimately I would expect that I (along with a majority of my clones) would be scared and avoid the subject. In my mind, it matters a great deal who is the original, from a certain perspective, and not at all from another. If a clone in this situation were to try to accept that they were not the original, they would be forced to accept that they are a flesh and blood fiction—a construct—and that the vast majority of their feelings, thoughts, desires, etc. stem from a fabricated place. This seems to be an uncomfortable position for many.

AM: This story has my brain thinking in so many directions! I’m suddenly wondering what is the point of originality, if it is so easily duplicated. Wouldn’t a clone be wonderful because they could live my life for me while I was sleeping or didn’t feel like going to work that day? Could I make my clone do all the housework I don’t enjoy doing? Could I send my clone to school while I’m at work, and finish college classes all the faster? Would a clone have the same goals, passions, and dreams as me? What were some of the things that went through your head as you were writing this story?

SH: In this world, the clones are all created from the same stock (the original) but then exist in a state in which they are constantly invited to consider themselves to be the original. This gives way to subtle variations (like the Brahms who has excelled at chess) while keeping the established core very much the same. I imagine them as extremely subtle fun-house mirror images of the original. As far as hierarchy and rules, the original can compel the synths to do their bidding—legally—but there is no mental connection or compulsion—no link of their minds—so sending one’s clones to classes instead of going oneself wouldn’t result in any learning for the original. The compulsion is not ideal in any case because it shatters the façade of originality that the original must go to great lengths to maintain, for the good and health of their synths. It actually took me a while to establish the rules (and actual laws) that would exist in this fictional world as it seemed legal cloning would be a complex issue in regards to rights and personhood.

AM: What events in your life have influenced you as a writer? Have your writing methods or style changed over your career?

SH: The biggest single influence on my writing life was my undergraduate writing instructor (and thesis advisor), Lee K. Abbott. I was set to become a high school English teacher before I sat in his workshop. So, for me, it’s hard to say anyone or anything else has influenced my writing more because I don’t know if I’d be here if I hadn’t been in his class. Since then, I would say my writing methods and style have undergone continuous transformation. In terms of methods, I think the biggest evolution has been consistently making time to both write AND read. I entered Temple’s MFA program thinking I’d write novels (and I’d still love to) but gorging myself on short stories and learning the control this structure requires has dramatically improved my style (at least I think so, most of the time). I think it’s driven me to focus on what’s different or special about how I write or how I see things and economize my stories to feature these aspects.

AM: You’ve taught rhetoric, composition, and creative writing at the university level. What surprised you most about your students?  How (if at all) did the experience of teaching help you develop your own writing talents?

SH: My experiences in these areas are drastically different from one another. In terms of the rhetoric and composition courses, I always felt that students had generally been underprepared by their high school and this made it difficult for them to access the higher order things the class was supposed to teach. This, in turn, also made it more difficult for me to teach these things in an accessible way due to the drastic difference in skill levels. I would say that this experience has not had any real impact on my own writing. Creative writing felt much more natural and rewarding for me. It was an elective, so students wanted to be there, and they were genuinely interested in learning about the subject matter. I also felt I was more of a conduit than an instructor in these courses—that it was my job to introduce them to certain ideas, methods, genres, readings, etc. and that they would take what they needed and leave the rest. This seemed like a more comfortable position for me. I think teaching creative writing helped me by constantly keeping me in touch with basic “rules” of writing. It also functioned similarly to my current role as a slush reader at Clarkesworld in that it allowed me to take in bulk examples of the various ways writers solve problems on the page—both successfully and not.

AM: Who are some of your favorite authors and artists? Why is their work important to you?

SH: I have a ton of writers I love, but a few big ones are Ursula LeGuin, George R. R. Martin, and Samuel R. (Chip) Delany. LeGuin’s work is important to me because it was probably some of the first truly great science fiction I read, and it pulled me into the genre. It’s also just fantastic writing. Martin’s A Game of Thrones universe is the first series I’ve ever really read (yes, I haven’t read Harry Potter or Lord of the Rings), and I love the way he builds worlds through characters rather than around them. I’ve read far beyond his epic fantasy, however, and at this point have probably taken in most of his published work. I’d say that his writing is probably my biggest influence in how I build science fiction and fantasy worlds. Chip has influenced my writing both as a writer of beautiful, powerful prose and as a teacher, so I think that there are pieces of things I’ve learned from Chip all over my writing (at least I hope so). Quickly, some short story writers I really enjoy are Monica Byrne, Ashley Blooms, and Greg Bossert, and I think it’s been very important for me to have more contemporary writers to look up to because it’s helpful to know how good my work has to be to succeed with talented writers like these submitting alongside me.

AM: So nice to interview a fellow Michigander! How does the Detroit Metro writer’s scene and nerd scene compare to other places you’ve lived and worked?

SH: I love the writing and nerd scene here. I run a workshop at the Westland Library and play competitive A Game of Thrones the Living Card Game (version 2.0) with a group of friends in the area. I also recently went to the Renaissance Fair for the first time, and that was tons of fun. I loved the scene in Philadelphia as well, and miss it (as well as my friends still living there) all the time. It’s really hard to compare the two, and I honestly wish I could live in both of them at once. 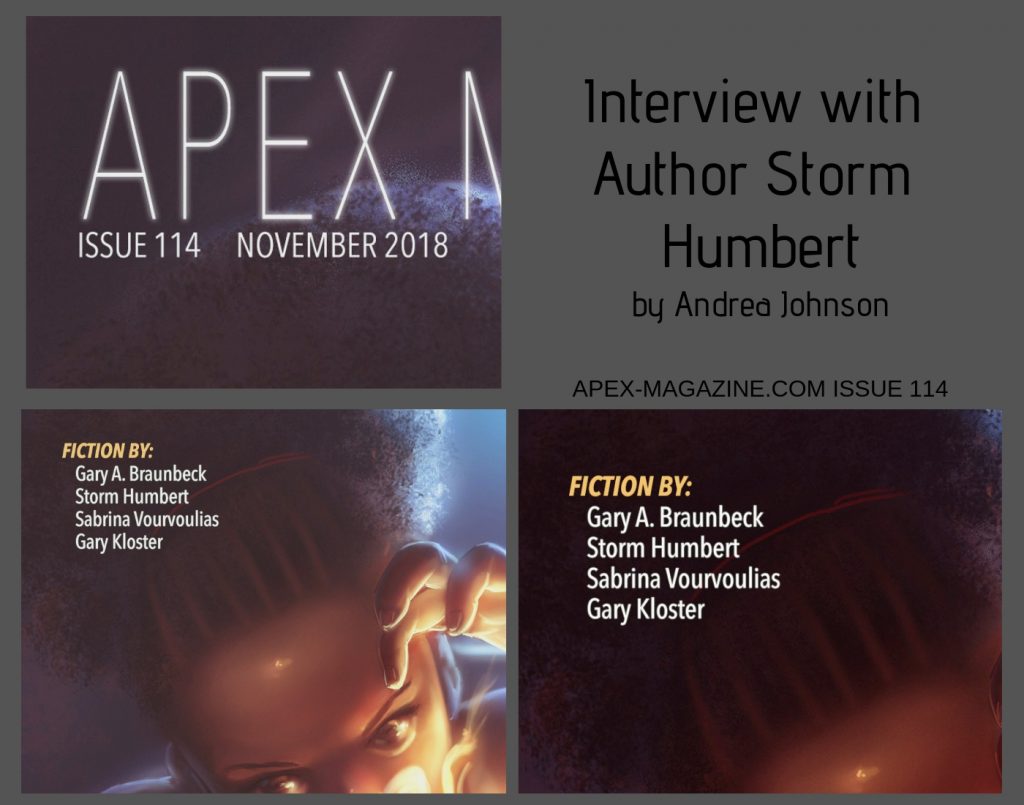