Something that really struck me reading “The Day When the Last War Is Over” was not just the arresting and surreal visuals but also the shocking silence and calm of the piece. These characters are in a suddenly quiet world, where even the creatures are now voiceless. Even the skeleton of the mother loses her means to speak.

Within this world of silent horror and death, the one thing the skeleton of a girl, Lyn, wants to do is reach out and forge a moment of connection with a stranger, even if this communication is flawed, messy, and full of misinterpretation. The story sets up this tragic juxtaposition of the need for human connection against the unspoken acceptance of total destruction, war, and violence. It’s a very affecting piece of fiction.

The author Sergey Gerasimov lives in Kharkiv, Ukraine, and has been staying there since the war started. His new book about the war in Ukraine, Feuerpanorama: Ein ukrainisches Kriegstagebuch, has been published in German and Hungarian by major publishing companies of Germany, Switzerland, and Hungary. His stories written in English have appeared in Adbusters, Clarkesworld Magazine, Strange Horizons, J Journal, The Bitter Oleander, and Pembroke Magazine, among others. Poetry he’s translated has appeared in Rattle and many other cool places. His last book written in English is Oasis published by Gypsy Shadow.

He joins us today to talk about “The Day When the Last War Is Over,” his writing life, and inspirations.

MARISSA VAN UDEN: Thank you so much for joining me today, Sergey. I found this story both incredibly sad and beautiful, and it gave me so much to think about. In the story, it is the last day of human history and the skeleton of a girl, Lyn, reflects on her father’s role in it. He’s a military weapons maker, but she describes him as making only “good bombs” that kill “only people” while leaving other things safe. She knows it is morally wrong to kill billions and yet has a very calm acceptance of the destruction around her. What do think motivates this kind of acceptance of mass violence and loss, both in Lyn and in humanity in general?

SERGEY GERASIMOV: “The death of one man is a tragedy, the death of millions is a statistic,” Joseph Stalin reportedly said. Today, some people from Russia write on social networking sites, “We will win because our country can painlessly lose ten million people!” Seriously. Ten million people, and painlessly. Some shout that they would be happy to turn into radioactive ashes for their beloved leader, and their beloved leader, smiling slyly, says about the whole world, “They will all croak, but we will all go to heaven!” This applies not only to Russia, of course. I think people in North Korea, or any other country professing anti-human values, might as well say the same. This is the way of thinking that has been cultivated for almost a century, by means of intense artificial selection, while everyone who thought differently was culled out.

MVU: You’re not only a fiction writer but also a poet and translator. I was fascinated by the way the characters misuse words in this story, and how this opens up whole different paths of communication and meaning between them. This conversation would have been so different had they perfectly understood one another. Can you talk a little about the inspiration for the relationship that unfolds through the text dialogue in this story? What interests you about translating between languages and imperfect communication?

SG: All the funny situations when the words were misused have really happened. I even saw a teacher of English that couldn’t tell “now” from “how.” The inspiration for the main character of this story was a girl named Vasilina, or Lina, who once mixed up “message” and “massage” and got into a really awkward situation. And small kids in Ukraine mix up the words “eyes” and “ears” all the time.

MVU: Having read this and some of your other stories, I know you have a unique and wholly original style, with metaphors and visuals that delight and surprise. You talk on your website about using automatic writing to create your stories that feel different and original. What habits or rituals do you perform to shift your mind into this state of uncontrolled writing, without specific goals or direction? And how often would you usually use this technique in a short story … Is there a process or typical pattern to how you integrate it into your writing process?

SG: I think you just have to fall asleep, staying awake at the same time, watching your fingers hit the keys. When, later, you delete most of the nonsense you have written, the rest of the nonsense starts making some unexpected sense. It’s really difficult to do though, and if you don’t have the right frame of mind, you’ll receive a depressing pile of complete nonsense, so I mostly prefer to think through all the details of a story. The traditional way is easier. The only novel I managed to write using automatic writing is The Mask Game. It’s a book about the world where the very rules of logic are skewed and some kind of anti-logic has replaced them. But it’s not an easy read. It’s for gourmets who have a really good imagination.

MVU: As a Ukrainian writer, is there anything you’re comfortable sharing with fellow writers and readers about what it’s been like to keep creating art while also trying to process so much devastation, tragedy, and horror in your home country? Have you found ways to find moments of creativity and focus for your work? And if so, are your strategies informed by your background in psychology and cognitive science?

SG: I’ve been living in the middle of the horror, tragedy, and devastation you are talking about since the first minutes of the war. And, since the first day of it, I’ve been writing my war diary, which has been published in German and Hungarian so far, and I hope will be published in English some day because it was originally written in English. I think it’s important because not only do soldiers fight and win wars, but ideas also do. I think my most profound moment of creativity was when I returned home and saw that bombs and shells had turned the city avenue into a plowed field. No amount of knowledge of psychology or cognitive science can explain that or let you put up with that, but when you write your thoughts and impressions down on paper, it helps.

MVU: You have published novels and over a hundred short stories over many years. What are some of the themes and ideas you have found yourself returning to, and what themes or ideas are you most interested in exploring next?

SG: I think it’s the importance of culture, tolerance, love, dignity, freedom, respect for an individual, and other eternal human values. Sometimes it seems that since they are eternal, they can wait. But no, they can’t.

MVU: Can you tell us some of your favorite people in works in fiction, science, or other fields that you draw creative inspiration from?

SG: An awful lot of authors of fiction and nonfiction. I usually fall in love with one of them, then read until I suck all the magic out of them, then find another favorite author. It’s a never-ending process. Speaking of science, it’s Einstein. And Heisenberg, of course, who knew how to make the nuclear bomb but didn’t do it because he lived in Nazi Germany. He saved all of us.

MVU: For readers who loved this story, what are some of your favorite pieces you’ve written that you’d like them to check out, and where can they find them? And do you have any upcoming publications or other projects you’d like to promote?

SG: I believe I work in the genre of metaphorical realism. Okay, I know such a literary term doesn’t exist, but why can’t I coin it myself to explain what I’m doing? It’s a genre where a person or thing or even idea is, at the same time, a metaphor for itself. It might sound difficult, but, in fact, it’s not. In “The Day When the Last War Is Over” the war is a metaphor for miscommunication or our failure to understand each other, and miscommunication is a metaphor for war. If you want to read other stories written in this genre, it’s “Rats” in Bitter Oleander and “I’m Your Shadow” in Pembroke Magazine. And “Wings” in J Journal is free for everyone to read, here: https://www.jjournal.org/post/wings. If you want to read something more entertaining and funny, it’s “Oasis,” fantasy with a touch of surrealism.

Speaking of upcoming projects, now NZZ in Zurich starts publishing the second part of my war diary, in German, and it takes all of my time. Until the war in Ukraine is over, I don’t think I can write about anything else. But it will be over one day.

MVU: I hope it is over soon, for you and for everyone affected, and I hope your war diary will be published in English soon as well. Thank you so much for your time and thoughts, and for writing this beautiful dark story. 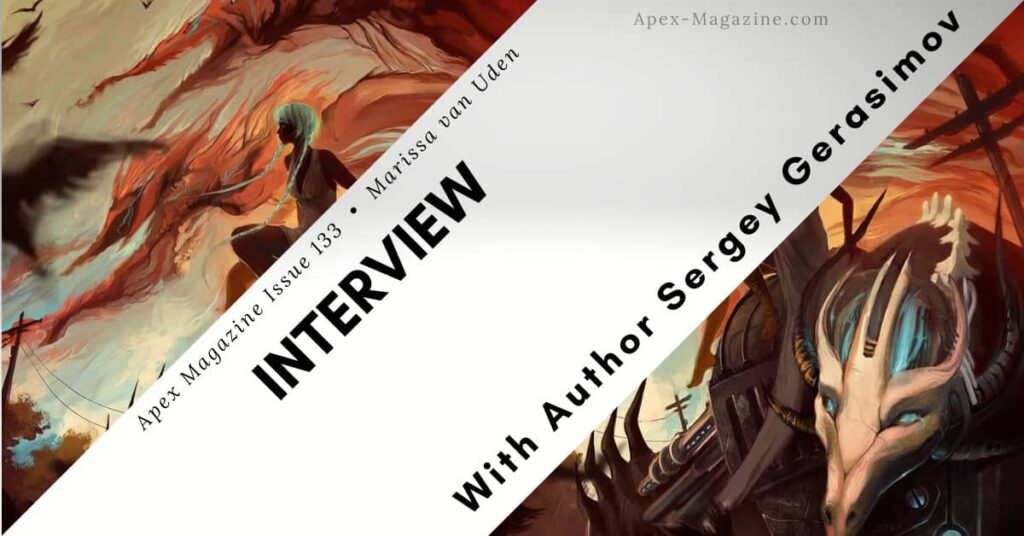