Sam Asher’s story “Americana!” started me thinking about value, and more specifically about perceived value. Does something have value because it is rare? Does it have value because you can eat it or burn it to stay warm? In the post-apocalyptic world of this story, I was fascinated by the value placed on extinct things—photos of long-dead celebrities on the red carpet, old magazines, images of Hollywood mansions that have long since crumbled. None of those things will ever exist again, so why do they hold value? Is it our nostalgia then, that holds the value?

When you’re looking to barter, the trick is to figure out what’s valuable to someone else and what they’ll do to get it. I remember from my twelfth-grade econ class that “market value” is what people are willing to pay for a specific item. That class was taught in a capitalist and consumerist society, in a decade when the economy was strong. I wonder what an Econ101 class would look like in Eddie’s world.

I love when authors play with boundaries and when characters poke the fourth wall. It’s just so fun! So, of course, I adored Eddie’s narrative voice and how he tells his story. He lives a harsh life, and he tells a harsh unadorned story. His life is fairly miserable—he defines words like retail, law, and murder entirely differently than I do.

I can’t tell if Eddie is an uncaring shithead or if he’s just doing what he needs to do to survive another day until he figures out an exit strategy. Is he a greedy bastard, or is he just pretending to be that way so he doesn’t get killed? What do you think? How badly did previous generations screw up that he has to live this kind of life?

Eddie knows how to wait and listen. When he learns what’s most valuable, he gains the power to crash the currency.

Sam Asher’s work has appeared in Amazing Stories, Potomac Review, The Forge, The Metaworker, and elsewhere. His fiction often includes quiet observant characters who have surreal experiences. He currently lives in New York and loves making his daughter laugh. You can follow him on Twitter at @samasherwriter.

APEX MAGAZINE: “Americana!” is told with the narrator, Eddie, speaking directly to the reader. Eddie plays fast and loose with the fourth wall (which I LOVE), sometimes promising the reader that something will happen later. How did you develop Eddie’s narrative voice? Why tell the story with the protagonist directly addressing the reader?

SAM ASHER: I love this question—thank you for asking it! I’ve been trying to reduce the barriers between my work and its reader for a little while now—I play extremely fast and loose with notions of dialogue tags, as one example—and in removing that fourth wall I can cultivate, hopefully, a tangible sensation of the reader being a part of the narrative. I love a story where I feel like I’m along for the ride. Do you remember the Choose Your Own Adventure books people loved as children? I’d love to somehow incorporate that true interactivity in future work, without it coming across as too gimmicky. The show Black Mirror is a real touchstone for me, as is the work of a good friend of mine, Chelsea Sutton. Look her up.

AM: I do remember those Choose Your Own Adventure books, and I loved them! They were a different story every time. Man, what I’d give for a whole stack of those. “Americana!” is stark and brutal. What were you thinking about while you were writing it?

SA: Something I’ve learned as I’ve gotten older and soberer (more sober? Sobery? Soberish) is that our species thrives in the stark, and the brutal, and so I try to write a world understandable to everybody. I’ve been accused of lionizing antagonists rather than my intended anti-heroes, and so that’s also always on my mind.

That said, I’m not completely sure I believe in the concept of the antagonist at all. Skeletor had his reasons.

AM: The magazines in the house. It’s not like those celebrities are still alive, or movies and red carpets and resorts in the Bahamas exist anymore. So why are these magazines so valuable? You can’t go to these places, you can’t eat the magazine. Why does something that won’t keep you alive or keep you warm have value?

SA: My fervent wish is that Eddie has come to learn that precise lesson. There’s no value in those things. Not in his present nor in ours. The only value is in people. Even the awful ones.

But I always say my first addiction, before alcohol, or cigarettes, or consumerism, was to fantasy itself. I’d lie awake in my bed and dream of all sorts of things. I’d pretend my legs were the branches of great trees beneath the blankets, that there was a bird who’d sit on my shoulder and whisper dreams into my ears. Sometimes I’d stare at the moon through my bedroom window and imagine I was going to be the first person to walk it barefoot.

The people of Eddie’s world have nothing left but fantasy, except they don’t fantasize about far-off worlds, or ghosts, or girls; they fantasize about everything our generation uses to distract ourselves now. Imagine how lucky we are to get to care about things that don’t matter? What a privilege! What a world! What an absolutely absurd and completely fucking unappreciated gift! We alone of every species on Earth have developed not one, not two, but dozens of iterations of the Real Housewives with which to completely ice-age our brains. Jeepers.

AM: The scene where the house is on fire, that paragraph is an absolute work of art. As you were writing this story, which scenes came into your mind first? Did you know exactly how the story would end when you wrote the opening scenes?

SA: First, thank you very much. I hope you know how much I appreciate your appreciation. It’s not something I ever expected of my work.

Second, I am absolutely, completely, utterly sure that I’ve never had any idea how any of my stories are going to end. I typically start with a single image and then write until a suitable number of characters have died. As far as I’m concerned, that’s Sam’s Writing Process 101. This might sound hopelessly pretentious, and you may shoot me for saying it, but the story tells me when it’s done. I often have no idea I’m finished until I’m putting the period on the final sentence.

For “Americana!” I’d scribbled the note, ‘Nostalgia as currency’ on a Duane Reade receipt, and then sat down to write it. I can tell you the very first image I had in mind, though, was the thrift store itself. It’s based on the location of a Walgreens just outside of Topsham, Maine. When writing the house-on-fire scene I sat outside the most beautiful old New Englander I could find and sketched how different parts of it might crumble as it burned. The owners of the house were very confused.

AM: I stalked you a little on Twitter, and in many tweets you mention your young child. Has becoming a parent changed the themes and ideas you want to write about?

SA: There’s a plaque here in Manhattan, in the Natural History Museum, that bears that old, almost certainly misattributed quote, “We don’t inherit the Earth from our ancestors, we borrow it from our children.” That informs everything I write, everything I do. This isn’t our planet, we’re just its stewards. Eddie belongs to a world whose parents failed to remember that. Who failed him.

AM: On Twitter, you also mentioned that you sold a novel! Congrats! What can you tell us about this new work and your experiences writing it?

SA: It’s actually a short fiction collection, although I’m currently in the process of trying to twist the stories into something resembling a novel, at least if you squint and it’s dark out. It’ll be released in early 2024.

Also please, everyone, read short story collections, so publishers won’t ask us to try and hammer them into novels to become more commercially viable. I’m a sprinter, not a marathon runner.

AM: When you aren’t writing, what do you like to do for fun?

SA: I like making my daughter laugh, more than absolutely anything. I read a great deal. I play basketball. I try to figure out how to make my daughter laugh with those other two activities.

AM: What’s with the ghost pictures on your website? They are cool photos, and I am super curious what that’s all about.

SA: I was fortunate enough to be accepted to Clarion UCSD in the summer of 2020. When that Clarion (and the subsequent edition) was canceled, my cohort became oh-so-witheringly known as the Ghost class, the Clarion ghosts. Those other specters have become some of my most wonderful friends, allies, and sounding boards. One of them is my daughter’s godmother. All of them helped get “Americana!” into shape. The ghost iconography honors them, and all they’ve done for me, and for each other.

AM: Thank you so much for chatting with me, I’m looking forward to reading your forthcoming short story collection. 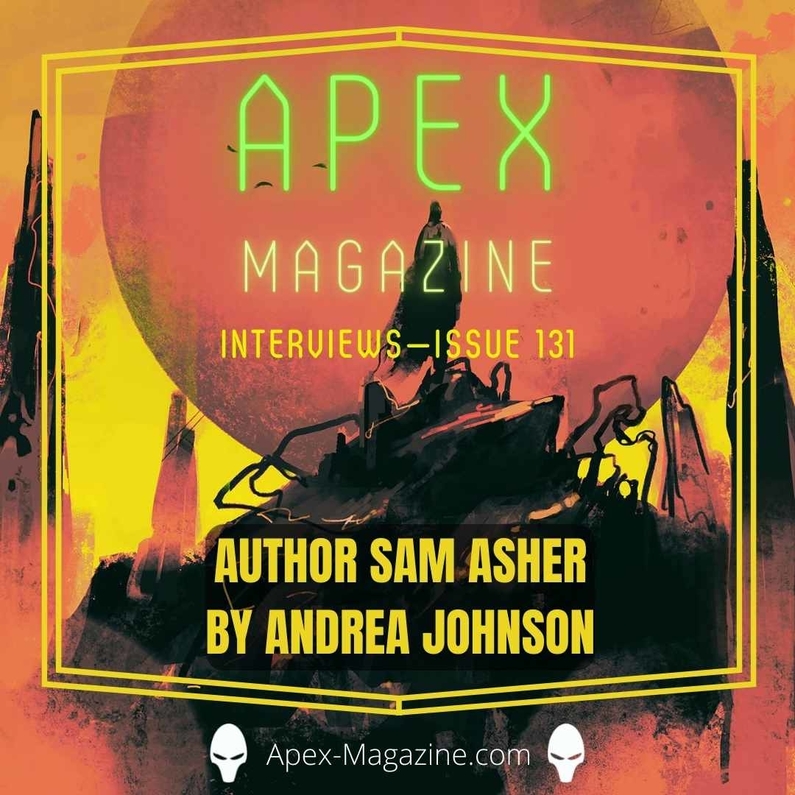