Somewhere in the hills, there’s a strange village where the curious seek the edge of the cliff. And then they fall off the cliff, their death is mourned, but their bodies are never found. What’s stranger? That the villagers are obsessed with solving this mystery, or that the victims typically fall off the cliff upwards of ten times?

RJ Taylor’s “It Rises and Falls and Rises Again” takes the reader right to the center of the mystery. What fascinated me about this story was the stark contrast between people who absolutely need to know what’s happening, and those who have zero curiosity about what the heck is going on. Ever been really, really passionate about something? And had to spend all day, or maybe a year with someone who couldn’t care less? If you’re the curious one, you and Lori might be kindred spirits. Maybe you’ve got hidden depths, and pieces of yourself you don’t always recognize. Maybe you’ve got pieces of yourself that you’re ready to leave behind. In that case, you and Lori are absolutely kindred spirits.

I’ve read “It Rises and Falls and Rises Again” about five times now. I’m starting to realize that I, too, have parts of myself that I’ve sloughed off over the years, parts that I’m not ready to let go of, parts that don’t look like me anymore even though I’ve been lugging them around for decades.

Taylor’s short stories and non-fiction have appeared at Dead Darlings, Factor Four, Quarter After Eight, and elsewhere. She participated in the pilot year for Grub Street’s Novel Incubator program and is a voracious reader. You can learn more about her work by visiting her website rjtaylorauthor.com, or by following her on twitter, @rjtaylorwriter.

Fair warning, this interview contains multiple spoilers for Taylor’s “It Rises and Falls and Rises Again.” You’ll want to read the story before diving into this interview.

Apex Magazine: This story opens with an excellent and bizarre hook. Not only does a supposedly well-adjusted person leap to their death from a mountain summit, the person seems to fall multiple times. No one seems surprised by this. There’s no body at the cliff’s base, which also doesn’t seem to surprise the village’s residents. What part of this story came to you first—the opening hook, or what’s actually happening on the mountain’s summit?

RJ Taylor: Thank you! They both came to me together, neither of them fully formed, just twin seedlings. I had a sense of what I wanted to be going on up there at the mountain top, but I experienced it as Lori did: from far away. I had to write through her point of view to really get up there and see what was actually going on.

AM: What were you thinking about when you wrote this story? What was your writing process like?

RJT: I was in therapy at the time I wrote this with a therapist who used a model called Internal Family Systems. This model views the mind not as a monolith but as multiple “parts.” If you’ve seen the Pixar movie Inside Out, it’s like that, just more complex. The therapeutic process itself involves visualizing or otherwise connecting with these parts and engaging them in empathetic conversation to help them release burdens and create harmony in the system.

So here I was talking to different parts of myself every week and it was weird but working. And my parts wouldn’t show up as just versions of myself, as they apparently do for most people. No, mine appeared as wild genies and talking sticks and angry rabbits and things like that. So, I was having this profound experience, but it was very difficult to explain to anyone. Like, how do you express how meaningful it was to talk to a stick in your head? Plus, I was changing because of the process, and all change involves a little bit of loss: the death of what was. I think that’s where the villagers’ point of view came from: realizing that what was a deep experience of self-knowledge to me looked like a weird and dangerous and inscrutable thing to the people around me.

When it comes to stars, I’m definitely more of the latter type myself. But internal mysteries, trying to understand the complexities of the human mind, these things pull on me like a siren. The people who try for the summit, that’s just the mystery that’s calling to them, that they just have to understand. They can’t help themselves.

AM: When Lori’s parents see a tiger and a small child falling from the cliff, do you think they will recognize those things?

RJT: I think so; I hope so! Her parents have it pretty hard in this story. They’ve already lost one child and now feel like they are losing another. The tiger and child will have Lori’s voice, but it will be screaming … so I’m not sure that will be comforting to them! At least they can hope that something other than death happened to her.

AM: You were part of the pilot year of Grub Street’s Novel Incubator Program. What is that program all about, and how would you describe your experiences with that program?

RJT: Yes, that was a fantastic experience. The Novel Incubator is a year-long intensive novel revision course from Grub Street, an independent writing center in Boston. You enter the program with a novel draft and you leave it having had your novel workshopped fully twice, with ongoing instruction and mentorship. So much of my writing instruction prior to that was focused on the short story, purely because of academic time restrictions. But novels are fundamentally different and while some skills are transferable, some aren’t. I am eternally grateful to my instructors and fellow classmates for helping me to level up my novel skills, especially to Michelle Hoover who also encouraged me to apply in the first place.

AM: What are some of your favorite themes to write about? Why do you return to those themes and ideas?

RJT: I love this question because it’s something I’ve been thinking about a lot lately. There are certainly themes I have been exploring for years and keep returning to: found families, rediscovering lost knowledge, learning from the past, and the danger of fighting who we are.

At their core, my stories and novels are almost always about the desire for transcendence, the desire to escape our current limitations. And, usually, the limitations in our own minds are the hardest to work with: the stories we don’t even realize we tell ourselves about who we are and the way the world works. The novel I’m querying now is about an immortal jester on a quest to die. He sees his own immortality as a prison and a punishment. It fascinates me the way we create suffering internally and then attempt to escape it through external means. Usually, we’re really trying to get away from a part of ourselves, which is impossible. Impossible and dangerous. That’s where the found families and lost knowledge usually come in: we’re able to understand ourselves more clearly though the people who care about us, and through learning from and coming to terms with the past.

AM: You mentioned on your blog you were planning to attend WorldCon/Discon III. And you are so right, conventions are very strange in the time of Covid. Were you able to attend WorldCon? If yes, what was your favorite part of the Convention? What was the most surprising part?

RJT: I was able to attend and had a great time! My favorite part was getting to meet up with most of the members of my writing group, The Immortals. We’ve been meeting virtually every other week for a full year and I’d never actually met one of them in person so that was ridiculously fun.

As for most surprising, I had never been to a Hugo ceremony in person before and I was surprised how moving it was to be there live and see people I like and admire being recognized for their work.

AM: What scifi/fantasy/spec fiction have you been enjoying lately?

RJT: It was bittersweet to finish up both the Greenbone Saga and The Expanse in the same month! Especially after just finishing up Joe Ambercrombie’s The Age of Madness trilogy. I mourned by starting two new duologies: Adrian Tchaikovsky’s The Final Architecture and Leigh Bardugo’s Six of Crows.

In short fiction, I was recently struck by “Tiger’s Feast” by KT Bryski (originally in Nightmare, I read it in Best American Science Fiction and Fantasy 2021), “To Seek Himself Again” by Marie Croke (here in Apex, issue 127), and “For Rain is to Wet and Fire to Burn” by Robert Minto (Beneath Ceaseless Skies). All of these stories made me immediately want to reread them right after I finished the first time.

In TV I recently discovered an appreciation for a genre I call “children messing with forces beyond their ken” which includes Fullmetal Alchemist, Arcane, and Attack on Titan. Pair that with a little Great British Bake Off and you have a well-rounded viewing experience!

AM: Fullmetal Alchemist is so, SO good! Enjoy! Thanks so much for spending some time with me. 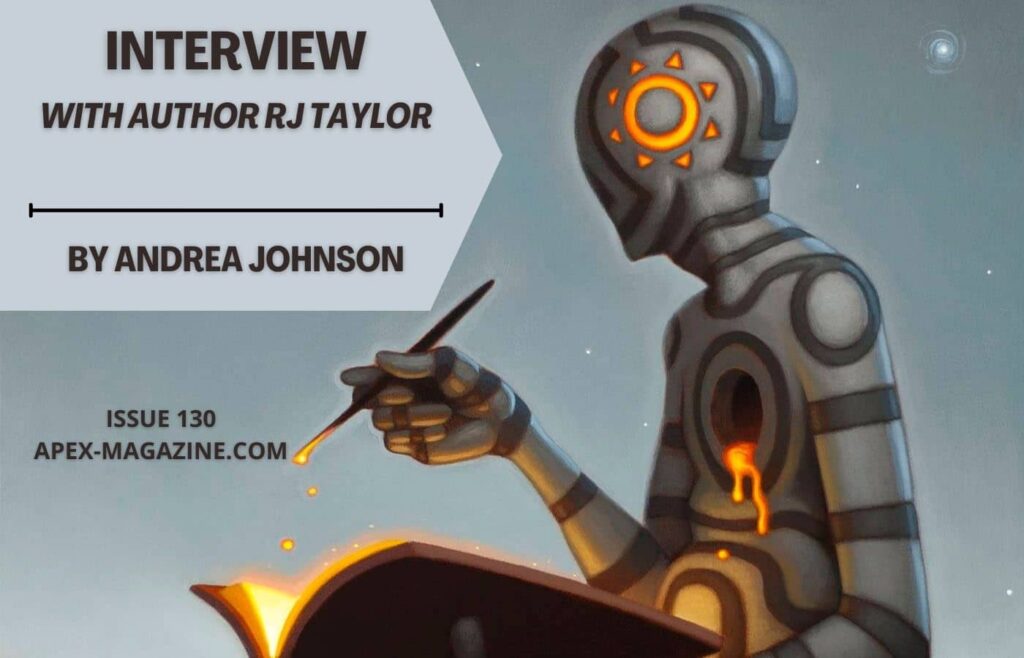